Megan Behringer joined Vanderbilt in 2020 and is currently an assistant professor of Biological Sciences with a secondary appointment to Pathology, Microbiology, and Immunology. She serves as the associate director of the Vanderbilt Microbiome Innovation Center and is a member of the Evolutionary Studies Initiative, currently serving on the Seminar Series Committee.

In her short time here, she has been recognized by the dean and awarded the Steven and Bunny Fayne Dean’s Faculty Fellowship in Biological Sciences.

Behringer took a “stochastic” walk through academia to find herself at Vanderbilt today. When she was an undergraduate, an upper-classman friend told her about research opportunities while at Auburn. That led Behringer to a food microbiology lab in the college of agriculture. She worked in the lab studying Campylobacter jejuni in retail poultry meat.

Behringer explained, “it was funny – I would talk to people doing field work and explain to them that my field work was to drive to the grocery store and I would buy breast meat from different farms and bring it back to the lab. Then, we would culture the Campylobacter out of the meat and DNA fingerprint it.”

When a Campylobacter infected patient would show up at the hospital, the infective strain could be cultured and matched to the survey data from the lab. As not all Campylobacter strains are equally virulent, many infections don’t lead to hospitalizations. However, when a particularly virulent strain was identified, the team could match the strain to the farm and the farm could be cleaned and sanitized to prevent future infections. This is an important and exciting way to start off in academia.

In Behringer’s words, “I really liked this idea of fingerprinting, and it was at the beginning of the genomics era. I liked bioinformatics and wanted to get more involved. My PI suggested I work at the vet school with a professor who was interested in developing genome-based diagnostics for E. coli and urinary tract infections.”

During her M.S. at Auburn, she was really excited to work on the quinolone resistance-determining region. Quinolone is a group of synthetic antibiotics discovered in the 1960s. Scientists had high hopes that microbes would not evolve resistance as this group of antibiotics did not exist in nature. However, bacteria were quick to develop resistance through a single point mutation.

During her Ph.D. in genetics at the University of Georgia, Behringer conducted her dissertation research with David Hall. It’s here that she was first introduced to experimental evolution and population genetics. “I just found it incredibly interesting and challenging, it was a great way to merge my background in microbiology with my interests in genomics and bioinformatics.” Although most of her Ph.D. research was conducted in yeast, Behringer was eager to get back to E. coli. 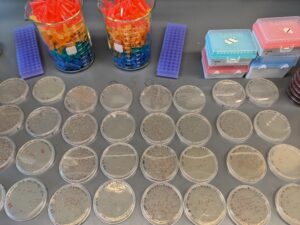 “When a postdoctoral researcher job opened up with Mike Lynch doing experimental evolution of E. coli, I was really excited! I loved it and started digging into it. I started seeing mutations and phenotypes that reminded me of the UTI cultures I worked with during my Master’s. To see these phenotypes start showing up in the experimental evolution populations I was working on was great; all of a sudden, I was looking at these experimental evolution lines differently –I wanted to know the biology behind it and why we were seeing these particular mutations and these particular phenotypes. This got me interested in systems microbiology, what happens between genotype and phenotype, can we think more about the physiology,” said Behringer.

It was lucky for Vanderbilt and ESI that the postdoctoral researcher job worked out, as the backup plan was to pursue a career as a bioinformatician with the National Institute of Health.