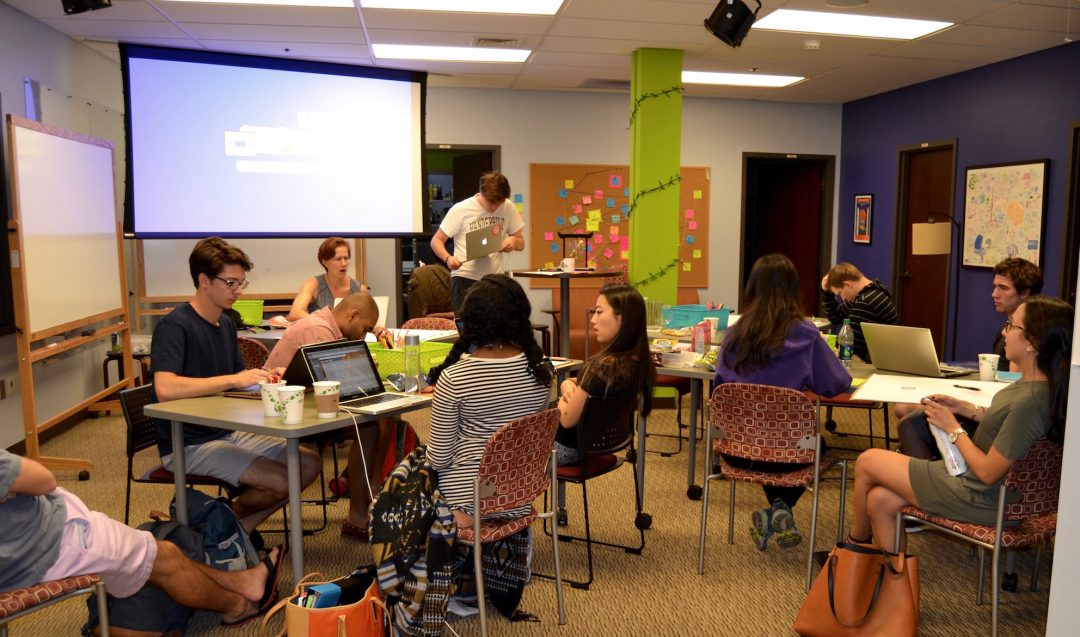 The Curb Scholars met on Monday, October 17th to discuss, present—and, in some cases, pitch—their Doors Project themes. The meeting began with an internal analysis of the Scholars’ project management procedures, and it was decided that in order to move forward with efficiency and good will, behavioral norms needed to be set. Sam was elected Facilitator for future meetings, Spencer was appointed Project Leader, and Jonathan took up the (rotating) role of writing the minutes. The Curb Scholars set aside fifteen minutes at the start of the meeting to set expectations for communication—both at the Curb Scholars meeting, and in the Group Me chat room where project planning takes place between Monday meetings. It was agreed upon that initiative and leadership with the Doors Project should be student-led.

The Doors team leaders met for ten minutes to discuss priority items, and then came together with the whole group to present each Door theme. Ben (via Spencer) pitched two ideas for his Door on Alumni Lawn—1.) Showtime and 2.) Knowledge/Literature. It was determined by the group that Ben’s Door should be “Showtime” due to its proximity to the Theatre Department (and potential for partnering with them in the future for sustainability of the Door). Spencer suggested adapting Ben’s “Knowledge/Literature” idea for his Door, which is positioned on Library lawn, The Curb Scholars liked the idea of drawing a bookshelf and allowing participants to paint their favorite book title and author on each book.

Sophia pitched three ideas to the Curb Scholars for her Door, which will be located in a quiet, natural place on campus: 1.) Narnia 2.) Forest and 3.) Galaxy. For the galaxy, she thought using white paint and thumbprints to make stars would be an inclusive way for onlookers to get involved. After much discussion, the Curb Scholars helped Sophia to determine that her door would be an Enchanted Forest (which combines options 1 & 2), with the potential for a starry night sky. (option 3).  Riley’s Door, which will be placed near Stevenson, went through similar group edits during the presentation. In the end, Riley decided he would move forward with a Fridge Door, which will allow participants to pin up pictures, magnets, drawings, lists, and other typical fridge items.

Treena, whose ideas were pitched by Rachel, decided she wanted to do a Diversity Door that showcased the different cultural, ethnic, geographic, and ideological elements of Vanderbilt’s students. She proposed a Blue Hands Door, which would allow students to paint their hands (or a representation of their hands) on the Door. The Curb Scholars thought this would be the most inviting Door to garner participation of onlookers. Griffin’s Door near Branscomb also took on a similar note of “community.” After input from the group, he decided to develop the “honeycomb” idea, which will unite people both inside and outside of Greek life.

December 4th was the date determined by the group leaders for painting the Doors. Griffin and Treena were appointed the task of figuring out the best way to prop them up. Riley volunteered to hunt for affordable doors with Ben K. Spencer will be finishing the narrative proposal to submit to Mark Petty. Sawyer was appointed the next meeting’s minute-taker.

Finally, the Survey team presented their edits to the group. The survey is one that will be passed around to undergraduates asking what projects and needs the Curb Scholars can meet for their peers. Previously, Riley and Serena met with Director Jennifer Novak-Leonard to discuss IRB certification, which would make the survey official and viable for potential future publication. The Curb Scholars discussed this update as a group, and decided that the initial survey would be an informal pilot, whereas more surveys in the future should be IRB certified in order to used to use the hard data to continue pushing the Curb Scholars program in the direction they envision.