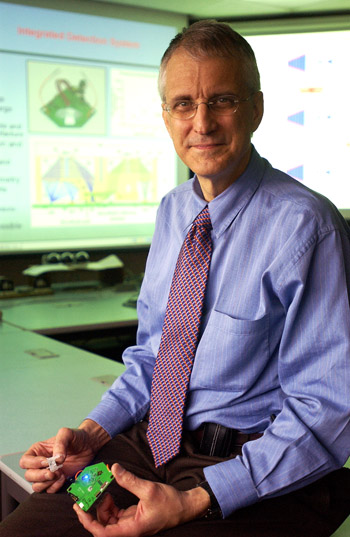 I joined Vanderbilt in 1977, fresh from graduate and postdoctoral work studying the cardiac magnetic field at Stanford University in the Division of Cardiology and the physics laboratory of William Fairbank. My goal was to build a program in the measurement of biological magnetic fields and make the first measurement of the magnetic field of an isolated nerve, which John Barach, John Freeman and I accomplished by 1980. More than a dozen years of support by the Office of Naval Research, the NIH, and the Veterans Administration led to the first measurements of the magnetic field of a single nerve axon and other studies that provided, for the first time, a firm biophysical foundation for the production and detection of the magneto-encephalogram and other biomagnetic signals.

By the late 1980s, I recognized that the holy grail of biomagnetic measurements, biological activity that was detectable magnetically but was electrically silent, would be hard to find in one-dimensional systems. I was the first to recognize that usually ignored differences in the electrical anisotropy between the intracellular and extracellular spaces of a sheet of cardiac tissue would lead to just such a situation postdoctoral work studying the cardiac magnetic field at Stanford University in the Division of Cardiology and the physics laboratory of William Fairbank. My goal was to build a program in the measurement of biological magnetic fields and make the first measurement of the magnetic field of an isolated nerve, which John Barach, John Freeman and I accomplished by 1980. More than a dozen years of support by the Office of Naval Research, the NIH, and the Veterans Administration led to the first measurements of the magnetic field of a single nerve axon and other studies that provided, for the first time, a firm biophysical foundation for the production and detection of the magnetoencephalogram and other biomagnetic signals.  I had to devise a new class of Superconducting Quantum Interference Device (SQUID) magnetometers that had the spatial resolution and sensitivity required to detect these fields and raise the $300,000 to get the instrument built; by 1991 my group had found the desired field pattern and devised magnetic imaging algorithms that have become the gold standard in the field. We recognized that the same instrumentation, scanning stages, and analysis algorithms could detect flaws in metals and plastics, and we mounted a 10-year program that was funded by the Air Force Office of Scientific Research (AFOSR), private industry, and the German government. This work evolved into an AFOSR-sponsored initiative and produced the only technique yet known that can measure the instantaneous rate of corrosion occurring inside an aging aircraft lap joint. This work in turn attracted long-term support from the Air Force. As our understanding grew, we found that the mathematical models of electrically and magnetically silent fields applied not only to cardiac muscle but also riveted aluminum.

Meanwhile, with colleagues in the Medical Center, I began measuring cardiac conduction velocity during ischemia and infarct and in the presence of antiarrhythmic drugs. During one of these experiments, I recognized the existence of virtual cathodes in cardiac tissue, which happened to be related to the same anisotropy differences that produced the magic magnetic fields. The cardiac community paid little notice until my collaborators and I showed that these anisotropy differences and associated virtual cathodes and anodes could explain an old puzzle in cardiac electrophysiology, produce a previously unrecognized form of cardiac reentrant activation, and provide key mechanisms for understanding the success or failure of cardiac defibrillation. This work also led us into the non-linear dynamics of cardiac stimulation.

The continuing exploration of biomagnetic measurements picked up another first, the magnetic field of intestinal smooth muscle, which has spawned a large, well-funded and productive collaboration with Bill Richards and Alan Bradshaw that is developing SQUID measurements into the first non-invasive clinical tool for the diagnosis of acute mesenteric ischemia and other gastrointestinal disorders.

The quest for the higher spatial resolution SQUIDs led me to recruit Franz Baudenbacher to lead an NSF- and NIH-funded project that has produced the world's best SQUID microscope and used it in an experiment, in collaboration with a geobiology group at Caltech, to characterize the thermal history of a Martian meteorite from its magnetic signature and show that material could be transported from Mars to earth without sterilization. This NanoSQUID has the potential to revolutionize the magnetic measurement of geophysical samples, and it allowed us to record beautiful data of the electrically silent magnetic fields of currents propagating through cardiac tissue, made possible by productive excursions into geophysics and NDE!

In 2000, I decided that I wanted to refocus my interests toward biology, and with the support of a $5 million, five-year grant from the Vanderbilt Academic Venture Capital Fund I founded the Vanderbilt Institute for Integrative Biosystems Research and Education (VIIBRE) to foster and enhance interdisciplinary research in the biophysical sciences, bioengineering, and medicine at Vanderbilt. This effort has been highly successful, and it has led to the development of a diverse set of microfluidic devices, sophisticated instruments, mathematical models, biomedical imaging, and new methodologies for instrumenting and controlling single cells and small cell populations, and for providing data for parameterization of models of biological processes. These innovative technologies include cellular biosensors, nanoliter bioreactors, chemotaxis devices, and models for cancer research; identification of chemical and biological warfare defense agents and infectious pathogens; new technologies for tracking metabolic and signaling dynamics and deriving models; biomedical imaging; biological applications of nanosystems; and cellular/tissue bioengineering and biotechnology. As of 2013, my colleagues and I have helped bring to Vanderbilt more than $68 million in new external funds to support VIIBRE-initiated or VIIBRE-supported research. Our mission and vision – to invent tools and techniques required to understand biological systems across spatiotemporal scales, and to focus research and education on an integrated multidisciplinary approach to microscale engineering and instrumentation for dynamic control and analysis of cellular systems – is being carried out by a cadre of 65 Faculty Fellows and External Associates and dozens of high school, undergraduate, and graduate students, postdocs, and staff members, who work together on a wide range of projects that explore the interface of physics, chemistry, engineering, biology, and medicine.

My personal research effort is focused on systems biology, primarily from the perspective of the optimization of automated systems for combined experimental control and inference of quantitative metabolic and signaling models and organs-on-a-chip to help us better span the breadth of spatiotemporal scales of systems biology and pharmacokinetics and pharmacodynamics. In this context, my colleagues and I are actively developing microfabricated devices for measuring cellular properties and controlling cellular behavior, fabrication of large-scale instruments and biomedical devices, analysis of data, design of experiments, and the development and application of mathematical models of cellular signaling and metabolism. Much of this work is currently directed toward several well-funded organ-on-chip collaborations with Harvard University, the Cleveland Clinic, Los Alamos National Laboratory, the University of California – San Francisco, Charité Universitätsmedizin Berlin, and CFD Research Corporation.