Since its founding in 2001 by John Wikswo, VIIBRE has established a broad program to develop and utilize a variety of BioMicroElectroMechanical Systems (BioMEMS) devices and advanced instrumentation to address pressing questions in integrative and systems biology and biomedical engineering. The focus has been on devising novel micro- and nanosystems and techniques that enable measurements on biological systems that have previously been either impossible or difficult to do with high throughput. The work frequently targets the dynamics of biophysical and physiological processes. The first major VIIBRE effort in this area has been led by the Cliffel group to design, optimize, and apply advanced multianalyte electrochemical sensors in MicroPhysiometers to determine the effects of chemical and biological toxins on metabolic dynamics. Their work now includes electrochemical detection of insulin, single-cell scanning electrochemical microscopy (SECM), and applications of metallic nanoparticles. VIIBRE’s measurements of metabolic dynamics have been extended to nanoliter and picoliter volumes by the Baudenbacher group with custom NanoPhysiometers with microfabricated electrochemical sensors to study cardiac excitation-contraction coupling in single cardiomyocytes, PicoCalorimeters that are now being applied to the study of cellular metabolism and biochemical reactions, and pulse-delivery microfluidics for cellular signaling. The Wikswo, Seale, and McCawley groups have developed novel sample-handling procedures and microfluidic pumps and valves, a dynamic amino-acid flux analyzer, and devices for long-term culture of small populations of cells in NanoBioreactors and for the growth of cultured cardiomyocytes during electrical stimulation. A major effort is under way, as a collaboration between the Wikswo, McLean, and Cliffel groups at Vanderbilt, the Lipson group at Cornell, and the Vallabhajosyula group at CFD Research Corporation, to apply symbolic regression, machine learning, electrochemical and optical sensing, and nanoelectrospray and MALDI and UPLC ion mobility-mass spectrometry to infer the equations underlying metabolic and signaling dynamics, ultimately to control biological systems. The Li and Webb groups are advancing the study of neural co-cultures. The Rosenthal, Cliffel, Wikswo, and McLean groups apply nanocrystals to biology. This work lays the foundation for a new organ-on-chip initiative funded by NIH and Vanderbilt.

Several different classes of microfluidic and other devices are being developed by VIIBRE faculty, staff, and students for the study of chemotaxis and haptotaxis in cultured cells, cellular forces, predator-prey dynamics in bacteria-protozoal communities maintained in microfabricated environments, metabolic oscillations in pancreatic islets, protein binding and configuration control in support of fundamental studies of haptotaxis, angiogenesis, and the dynamics of inter- and intracellular signaling during the immune response in non-adherent immune cells and immune cell pairs restrained in arrays of microfabricated traps. Electrical stimulation has been used to control cell fate, and VIIBRE’s microfluidic devices are being applied in the tracking of differentiation of stem cells and apoptosis of cancer cells. A variety of broadly applicable microfluidic and optical techniques support these efforts, and have led to a number of patents. Image processing provides new tools for studying cell motility and mechanical activity, and mathematical modeling inspires new research directions. VIIBRE supported tissue engineering in the Shastri group.

Shane Hutson is using advanced optics and microfluidics to study Drosophila and C. elegans morphogenesis and wound healing (supported by an NSF career award) and laser tissue ablation. The Baudenbacher group has developed ultrahigh resolution scanning superconducting quantum interference device (SQUID) microscopes for studies of algal and mammalian electrophysiology, cell sorting, and geomagnetism. Kirill Bolotin and his group are pioneering new graphene-based sensors. All of these studies contribute to a larger effort to develop devices and models that will enable the “instrumentation and control” of single cells and small populations of cells, and to thereby eventually probe the complexities of systems biology.

At the larger scale of the isolated mouse and rabbit heart, a collaboration between the Baudenbacher, Sidorov, and Wikswo groups and Dr. Richard Gray of the Food and Drug Administration is utilizing advanced electrical, magnetic, and optical measurements, stimulators  and image processing to explore cardiac electrophysiology and metabolism, and their connection to heart disease. SQUID imaging has been extended to include magnetic measurements of gastrointestinal electrical activity. VIIBRE supported faculty recruitments that strengthened functional magnetic resonance imaging at Vanderbilt.

VIIBRE research, which spans molecules, cells, tissues, and organisms, has been funded in part by the NIH, DOD, Whitaker Foundation, NSF, Human Frontier Science Program, and industry. These and new efforts that have not yet led to publications or external funding are the result of active, multidisciplinary projects already established between VIIBRE and collaborating faculty, and will provide key components of the technical foundation for many projects at the intersection of medicine, biology, engineering, and the physical sciences. 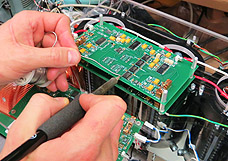 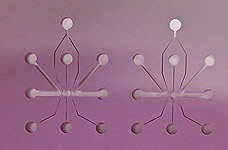