For the past 45 years, John Wikswo has worked on measurements and modeling in biological physics, bioengineering, and electrophysiology, initially at the scale of humans and dogs, then with rodents, and more recently at the level of nanoliter bioreactors and individual cells. He explored in depth the relationship between cardiac electric and magnetic fields and the generation of the vector magnetocardiogram. With his collaborators, he made the first measurements of the magnetic field of a single axon and a single skeletal muscle fiber. All of these studies provided key insights into the parameters that relate the intracellular action currents to the transmembrane potential and extracellular electric and magnetic fields. His group played a central role in demonstrating the part performed by tissue anisotropy in the response of cardiac tissue to defibrillation-strength electric shocks and the behavior of cardiac virtual electrodes, which are explained by the doubly anisotropic bidomain of cardiac electrical activity. He also participated in pioneering magnetic measurements of the magnetoenterogram, a non-invasive recording of the magnetic field of the electrical activity in the human gastrointestinal tract. He spent a decade exploring the capabilities of superconducting quantum interference device (SQUID) magnetometers for non-destructive testing of plastics, electric power generation hardware, and corroding aluminum.
He is the founding Director of the Vanderbilt Institute for Integrative Biosystems Research and Education (VIIBRE), which was created in 2001 with a $5 million, five-year grant from the Vanderbilt Academic Venture Capital Fund to foster and enhance interdisciplinary research in the biophysical sciences, bioengineering, and medicine at Vanderbilt. Within VIIBRE, he has focused on building on-campus collaborations to use microfabrication to create and utilize devices to instrument and control single cells and small collections of cells, and to provide data for parameterization of models of biological processes. VIIBRE has developed a breadth of optical and electrochemical instruments, mass spectrometry techniques, and software for studying how living cells interact with each other and their environment and respond to drugs, chemical and biological agents, and other toxins, thereby providing insights into systems biology, physiology, medicine, and toxicology. Since 2001, VIIBRE has played a central role in bringing to Vanderbilt grants and contracts totaling more than $90 million. VIIBRE is also the home of the Systems Biology and Bioengineering Undergraduate Research Experience (SyBBURE), a year-round, multi-year program funded by Gideon Searle that has mentored 300 undergraduate students over the past twelve years. 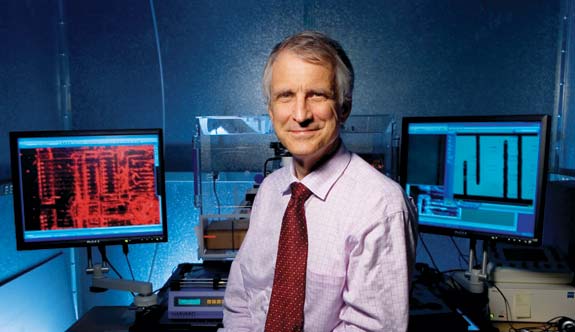 John Wikswo’s personal research effort focuses on systems biology, primarily from the perspective of organs-on-a-chip and the optimization of automated systems for combined experimental control and inference of quantitative metabolic and signaling models to help us better span the breadth of spatiotemporal scales of systems biology, toxicology, and pharmacokinetics and pharmacodynamics. In this context, he and his colleagues are actively developing microfabricated systems for measuring cellular properties and controlling cellular behavior, fabricating biomedical devices and large-scale instruments, and developing and applying mathematical models of cellular signaling and metabolism to analyze data and design experiments. Beginning with a 2009 Defense Threat Reduction Agency (DTRA) grant, his group has been developing low-cost microfluidic pumps and valves and controllers for maintenance of trapped cells, organs-on-chips, and bioprinted tissues, directed towards a universal, disposable, modular microfluidic platform that could be used to create an in vitro micro-homunculus.
He is leading platform engineering and bioreactor integration for the Vanderbilt-Pittsburgh Resource for Organotypic Culture Models for Predictive Toxicology (VPROMPT), an EPA-funded STAR Center, and was lead PI of a five-year neurovascular unit (NVU)/blood-brain barrier-on-chip project under NIH/NCATS’ Tissue Chips for Drug Screening program, with additional funding from DTRA. As lead PI of a project under the NIH Tissue Chips for Disease Modeling and Efficacy Testing program, he is extending the scope of that effort to include a cardiac construct. DARPA funding has supported the development of a gut-on-a-chip in a novel, openable Puck MicroBioreactor. He is also the lead PI of a collaboration with the universities of Pittsburgh and Wisconsin funded by NCATS’ CTSA program. In collaboration with pharmacologists at AstraZeneca, engineers at CFD Research Corporation, and intramural researchers at NIH/NCATS, VIIBRE has developed a 96-channel MicroFormulator to individually address each well of a 96-well plate so as to deliver drugs and remove metabolites with a realistic pharmacokinetic time course that can be different in each well. This “MultiWell MicroFormulator” received a 2017 R&D 100 award, has been licensed by CN Bio Innovations, and is scheduled for market release in 2019 as PharmacoMimix™. VIIBRE is now creating SmartLids that can either control each well of a 24-transwell plate or 24 of CFDRC’s micro-organs, or provide automated multi-week perfusion of printed tissues in 12-, 24-, and 96-well plates.
Dr. Wikswo has published more than 200 peer-reviewed papers and is the Associate Editor for Systems Biology and Microphysiological Systems for Experimental Biology and Medicine, and Editor of the journal's 2014 and 2017 thematic issues, “The Biology and Medicine of Microphysiological Systems” and “Progress Toward Adoption of Microphysiological Systems in Biology and Medicine.” He is a fellow of seven professional societies, holds 28 patents and has multiple patents pending, and nurtures innovation among VIIBRE staff and his undergraduate, graduate, and postdoctoral trainees. He loves teaching and learning and sharing his enthusiasm for research and inventing with high school students, undergraduates, and graduate students. He has extensive experience with both industrial/academic collaborations, particularly in both Phase I and Phase II SBIRs, and large DARPA, DTRA, and NIH projects.

Complexity, microphysiological systems, and closing the hermeneutic circle of biology