My teaching philosophy can be embodied in three quotations: "The mind is not a vessel to be filled but a fire to be kindled" (Plutarch); "You cannot teach a man anything; you can only help him to find it within himself" (Galileo); and "Education is what survives when what you have learned is forgotten" (B.F. Skinner). My teaching also reflects my upbringing and interests. I am an experimental physicist, engineer, and physiologist. I love to build and play with gadgets, help people learn to build things, and figure out and explain how things work − vocations I trace to my childhood. My father, an industrial research chemist and master equally of all trades and the Socratic method, started building a 16-inch telescope when I was five. During my 15-year apprenticeship to this and other projects, I learned the how and wherefore of everything from mirror grinding to plumbing. (Our telescope and observatory were featured in Scientific American in April, 1970). My mother, a college mathematics professor, shared with me her love for teaching. When I was in fourth grade, I explained to one of her classes a binary adding machine I had assembled. In high school I explained things the teachers didn't understand to my algebra and physics classmates. As an undergraduate at the University of Virginia, I had another remarkable mentor in Professor Bascom Deaver, who hired me as a technician to equip his new low temperature physics laboratory, guided me as I taught myself experimental physics, and encouraged me to work with his mentor at Stanford, William Fairbank. My belief in learning by doing and by teaching was deepened when my wife and I taught our children at home for a few years. I observed not only the various ways that humanists and scientists approach the world, but also how different people think and learn. Watching our children explain things to each other and their friends convinced me that students learn by explaining. I can even cite professional pedagogical influences, such as Richard Light's The Harvard Assessment Seminars (which I often require my students to read) and Sheila Tobias' They're not Dumb, They're Different. 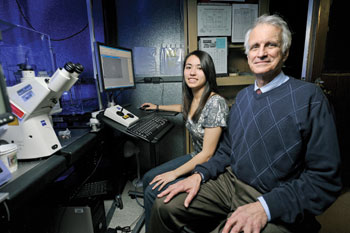 My interdisciplinary research has always been reflected in my classroom teaching. In addition to teaching such courses as Advanced Laboratory in Mechanics and Heat, Medical Physics, Electricity and Magnetic Fields, General Physics, Bioelectricity, Elementary Physics, Biophysical Electrodynamics, Principles of Physics, Practical Physics, Introduction to Applied Physics, and Electricity, Magnetism, and Electrodynamics to undergraduates, I have developed new demonstrations for premed introductory courses, taught medical physics to biomedical engineers, and electricity and magnetism to senior physics undergraduates and incoming graduate students. I have enlisted undergraduates to develop course materials, the largest such project being an Advanced Undergraduate Laboratory in Living State Physics, supported by NSF and Vanderbilt. As my interdisciplinary research has expanded into new areas, so has my teaching. In 2003, I received a Whitaker Special Opportunity Award (“Instrumenting and Controlling the Single Cell: An Education Program in Biomedical Engineering”) that supported two new faculty members and created new courses.

I have participated in Vanderbilt’s College Scholars Honors Seminars Program since it was begun more than 20 years ago, leading undergraduate seminars that explore such topics as Scientific Revolutions, Physics of Technology, and, most recently, What is Life?, and Why is Biology Complex?. The last two classes have enrolled a wonderful mix of science, humanities, and engineering students, who undertake critical and extensive readings guided by a Socratic dialogue and complemented with student-led presentations.

From the beginning of my career I have enriched my research endeavors with a steady stream of some of Vanderbilt’s brightest, most energetic students and postdocs from physics, chemistry, biology, medicine, and electrical, mechanical, and biomedical engineering and continually taught them to communicate across disciplines. In establishing VIIBRE, I maintained a strong focus on undergraduate, graduate, and postdoctoral education, and through each of VIIBRE’s projects in innovative technologies I have supported and/or mentored multiple trainees from across the physical and biomedical sciences.

On the undergraduate level, the most visible evidence of this effort is the Systems Biology and Bioengineering Undergraduate Research Experience (SyBBURE), a major program funded by Vanderbilt alumnus Gideon Searle, with the goal to provide undergraduate students, as early as possible in their academic careers, with training in specific research tools and active participation in interdisciplinary scientific research. This multi-year, year-round program allows 25 or more undergraduate students to get deeply involved in long-term research projects. SyBBURE can boast – among other honors won by its participants – Goldwater Scholars, Beckman Scholars, and NSF Graduate Research Program Fellows, and placement in graduate and professional programs including those at the University of Chicago, MIT, Stanford, the University of Washington, Berkeley, Rice, Georgia Tech, Northwestern, Harvard, Columbia, Carnegie Mellon, and Vanderbilt.

At the graduate level, I lead students to conceive of the Ph.D. in the terms of my own mentor at Stanford, William Fairbank, as a “state of mind” that is reached in four steps: 1) on your own you must identify a problem, 2) figure out how to solve it, 3) proceed to solve it, and 4) successfully write it up. Often students get trapped at one of the levels, and my primary role as an advisor is to help them to successfully navigate the transitions between stages and to achieve the state of mind commensurate with the degree. Fairbank never stated it, but I came to recognize that his fifth level was for the student to ask for the degree. Over the years, I’ve watched students progress through these levels with differing transition probabilities and rate constants. Ideally, their intellects and personalities continue to build on a strong foundation thereafter.