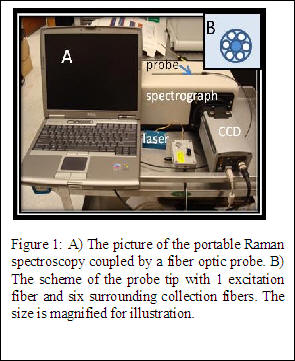 Inflammatory bowel disease (IBD), including ulcerative colitis (UC) and Crohn’s disease (CD), affects nearly 2 million Americans, and the incidence is increasing worldwide. As two distinct forms of IBD, UC and CD require different medical and surgical treatments. However, the distinction of UC and CD cannot always be made due to overlapping symptoms, and similar radiographic and histological features. Indeterminate colitis (IC) is IBD that cannot be diagnosed as CD or UC and is diagnosed in up to 15% of IBD patients. Therefore, accurate diagnosis of IBD is important to improve medical care, intervention, and prognosis. The main goal of this project is to develop a Raman spectroscopy technique to improve the accuracy of IBD diagnosis.

The Raman system used for the initial measurements in this study consists of a fiber optic probe, a spectrograph, laser, and CCD camera (Figure 1). The probe geometry (Figure 1, B) contains a 400-µm core fiber for laser excitation surrounded by six 300-µm core collection fibers. A tunable diode laser emitting at 785 nm is used as the excitation source.  This portable Raman system will be used for all in vitro measurements, while a comparable system integrated with an endoscope will be designed for in vivo measurements.

In a pilot study, colon tissue biopsies from patients with IBD are investigated. Fresh frozen colon tissue samples are obtained from the Vanderbilt Tissue Acquisition and Pathology Shared Resource, and stored at -80°C until the time of measurement. Upon measurement, the sample is removed from the freezer and allowed to thaw to room temperature while being hydrated in saline. Raman spectra are acquired using 80 mW of power and 3-5 second integration time. Measurements are taken from five different places on the surface of the sample. These places are marked following measurement and evaluated by histology. 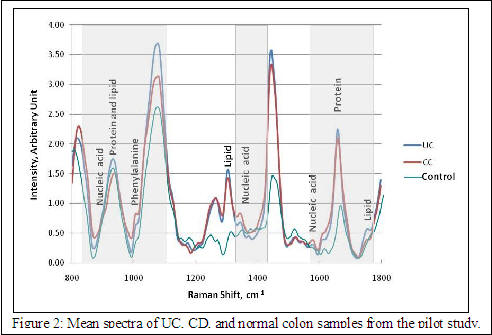 The results of the preliminary study indicate that spectral differences exist between UC, CD and normal colon samples (Figure 2). Several regions of difference have been identified and attributed to nucleic acids, proteins, lipids, and phenylalanine.  Initial results indicate that Raman spectroscopy is sensitive to biomolecular differences between UC and CD and therefore, could be used as a viable diagnostic tool in differentiating IBD.

Current work on this project includes further testing of IBD colon samples to build a Raman spectral database for multivariate analysis. Additionally, a combined Raman probe and endoscope is to be built for in vivo testing.