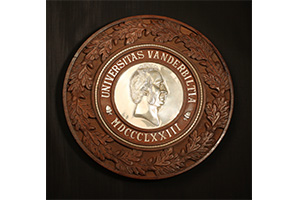 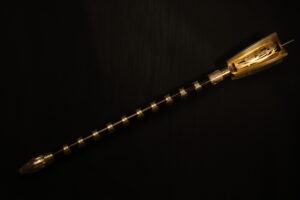 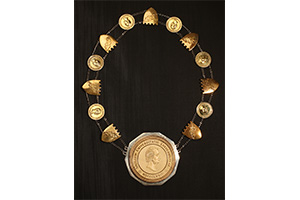 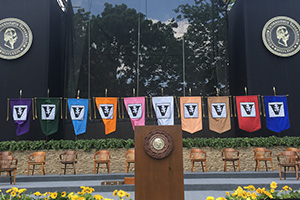 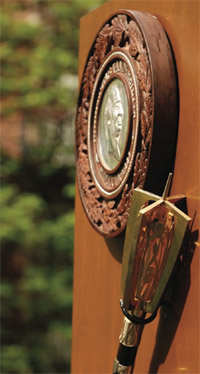 Vanderbilt’s Commencement predates the university’s formal opening. The first students to receive a Vanderbilt degree did so on February 25, 1875, seven months before the university officially opened. The 61 young men receiving their doctor of medicine degrees had enrolled in Vanderbilt’s initial Medical Department, which opened on October 5, 1874, in cooperation with the previously established Medical Department of the University of Nashville.

According to a February 26, 1875, Republican Banner newspaper account: “The Commencement exercises…occurred at Masonic Hall last night, in the presence of a very large and intellectual audience. Every seat in the hall was filled, and standing room was at a premium.” In his address to his classmates, the valedictorian of the class referred to their “arduous” studies as “nothing compared with the trials they would experience in the dim future.” After expressing appreciation to the faculty, “To his fellow students he spoke words of earnest advice, bidding them do their whole duty in the mission of mercy they had chosen.”

With that auspicious beginning, commencements commenced at Vanderbilt. Although the entire university officially opened in October 1875, the Medical Department continued to be operated in conjunction with the University of Nashville until 1895. The two Medical Departments continued to hold joint commencements near the end of February following a five month academic term. Vanderbilt’s second graduating class (1876) consisted of 46 students receiving the doctor of medicine.

A few months later (June 1876), 10 students in the Law Department qualified for the  bachelor of law degree. Also by the end of the first academic year, there were eight “school graduates.” These students were presented “certificates of graduation” (not a degree) for “completing with distinction” the entire course of study in any of the schools of the Department of Philosophy, Science and Literature (now the College of Arts & Science). Prizes were also awarded to outstanding students at the end of this first year of classes on the new campus.

The first full Commencement day on campus came the following year, June 20, 1877. It included all three departments located on the main campus: the Department of Philosophy, Science and Literature; the Biblical Department; and the Law Department. The grand ceremony was held in the chapel of Vanderbilt’s Main Building, also called University Hall (now Kirkland Hall). There were only two candidates for the bachelor’s degree from the Department of Philosophy, Science and Literature with eight candidates from the Law Department receiving the bachelor of law degree. The Medical Department had already awarded 52 M.D. degrees on Feb. 22, thus making a grand total of 62 students receiving Vanderbilt degrees in 1877.

Included in the June 1877 ceremony, seven students from the Biblical Department received diplomas (not degrees) for completing a two-year course of study. In addition, 15 students received “certificates of graduation” (not degrees) in the Department of Philosophy, Science and Literature. 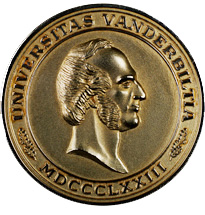 Also at this Commencement ceremony, prizes and honorary medals were presented. While the Founder’s Day Medal for Oratory had been first awarded in May 1876, the Founder’s Departmental Medals were first awarded at this Commencement (1877) to the top student in each of the four departments. The endowment for these medals had been made possible by Cornelius Vanderbilt himself. The tradition of Founder’s Medals lives on today with a medal still given for “oratory,” as well as for top honors in Vanderbilt’s 10 schools and colleges. The obverse side of the gold medal bears in relief the official university seal with the profile of the founder. The reverse side bears the words, “Founder’s Medal for First Honors,” with space for the engraving of the name of the recipient, school in which the honor was achieved and the year of recognition.

The first 49 commencements (with the exception of one) held on Vanderbilt’s campus (1876 – 1924) took place in University Hall (now Kirkland Hall) with the only air conditioning being the breeze – if any – coming through the open windows of the chapel located on the third floor. The one exception came on June 20, 1905, when the ceremony was held outdoors on the campus because University Hall was under reconstruction following the devastating fire that gutted the building earlier that year. Although held at 4:30 pm., either the heat of a late June day, or the threat of inclement weather, or, possibly, poor sound amplification apparently discouraged consideration for moving permanently to an outdoor venue. Commencement returned to the University Chapel in 1906 and remained there through 1924. 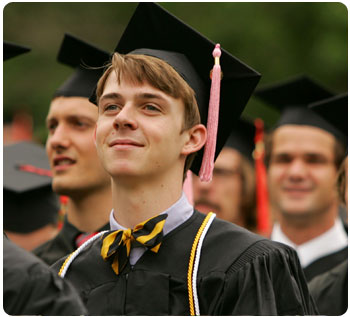 The next 24 commencements were held in Neely Auditorium. Completed in 1925 and seating 1,100, the “new” chapel was the site of Commencement through 1948. However, following World War II, the number of graduates and their guests outgrew the small auditorium. For the first time, the expanse and beauty of the Vanderbilt campus seemed a logical move for Commencement. For the next 21 years (1949 – 1969), Library Lawn was set up each spring for the celebration with the exception of 1953, when Commencement was planned for Memorial Gymnasium to celebrate its opening.

The May 31, 1970, Commencement was planned for Dudley Field at the Vanderbilt Stadium. However, rain forced the ceremony indoors to Memorial Gymnasium, and the idea of future use of the stadium was apparently abandoned. Returning to campus the following year, Commencement was held on Curry Field, the large open space east of Kirkland Hall. The field remained the site of Commencement for 17 years (1971 – 1987). With the construction of Wilson Hall taking a portion of Curry Field, Commencement moved to its present location, Alumni Lawn, in 1988.

Only extremely inclement weather forces Commencement to its indoor venue, Memorial Gymnasium, where, similar to Vanderbilt’s first commencements, the only air conditioning is a breeze – if any – coming from fans. But no matter where the age-old tradition takes place, the excitement and joy of the occasion always carry the day. 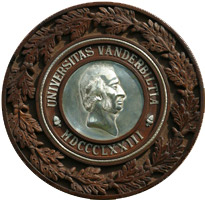 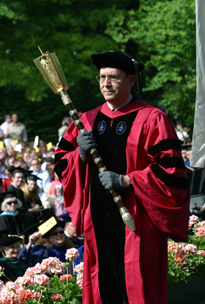 The mace, a symbol of authority, was carried by the chair of the Faculty Senate for the first time at Commencement on June 1, 1969, as a symbol of Vanderbilt’s authority to confer degrees.

Symbols were selected by Robert A. McGaw, then secretary of the university.

The Chancellor’s chain of office was worn for the first time on May 17, 1978.

The Chancellor’s chain of office is a silver and gilt collar that displays several emblems of the university. The parallel chains of sterling silver are surmounted by alternating Vanderbilt shields and modified Founder’s Medals. The medallion, which hangs from the parallel chains, is an impression of the Seal of the University. The decagonal sterling silver frame of the medallion symbolizes the university’s 10 schools. 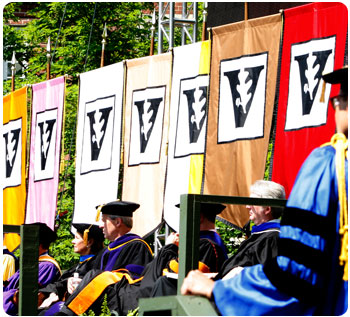 The gonfalons were carried in procession at Commencement for the first time on June 4, 1967.

Each gonfalon is decorated with the Vanderbilt logo against the field of the appropriate academic color. The field of each school or college gonfalon represents the academic discipline of the degrees offered:

In recognition of Peabody College’s history, a Peabody Centennial Medal in a round walnut frame is mounted above this banner.

The gonfalon, measuring 3 feet by 5 feet, are constructed with a lined double layer of satin. The logo is appliqued to the satin.

Gonfalon bearers, selected by the dean of each school or college, lead the processions of candidates.