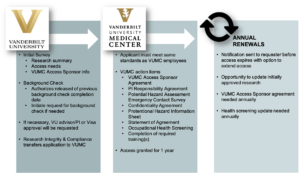 The VU-VUMC research access agreement covers VU-employed faculty and their associated VU-employed key study personnel research staff, VU post-doctoral appointees, and VU advanced academic degree students and postdocs. VUMC access is not permitted for VU undergraduate students or minors (under 18 years of age) including no access to VUMC protected health information (PHI) regardless of the platform storing the PHI, e.g., Electronic Health Record (EHR), REDCap or Box. VU researchers must be listed as PI, Co-I or Key Study Personnel on an active IRB-approved or IRB-ceded study that is being led by VU. If you do not meet these criteria and need access to VUMC clinical resources, see Vanderbilt University Medical Center Relations for information on intern and observer appointments.

How long does the approval process take?

The approval process takes approximately one month as it involves various access requirements including a background check, health screening, and required VUMC documentation.

What information is required to complete the initial survey?

The initial survey will ask you to provide general personal information as well as details for your VUMC access sponsor, your research, and what type of resources you are requesting access for. You will also be asked for permission to release to VUMC the date of your most recent background check.

What are the requirement of the VUMC Access Sponsor

VU-employed Faculty who are named as the PI or Co-I on an active VUMC IRB approved, or VUMC IRB-ceded, project must have a “VUMC Access Sponsor,” defined as a VUMC-employed Faculty member with access to clinical systems by virtue of his/her role at VUMC who has agreed to sponsor such access.

For the avoidance of doubt, the VUMC Access Sponsor is not assuming any role other than oversight of VU Research Personnel access to and use of VUMC Resources and is not replacing the research project PI as the primary individual who is in charge of and has direct responsibility for the IRB-approved, or VUMC IRB-ceded, research.

In all cases, the VUMC Access Sponsor shall document his/her sponsorship/supervision in writing.

I don’t have a background check; how can I get one?

Background checks are dependent on your current role at VU (and in the case of students, your school). If you are in need of a background check, the REDCap survey will provide information on how to request based on a series of answers to identifying questions.

What approvals are needed before my application can be submitted to VUMC?

Your current role and visa status will determine the necessary approvals for your application to be sent to VUMC. Graduate students require approval from their academic advisor. All non-US citizens will require approval from the Office of Employee Immigration Services or International Student & Scholar Services to ensure that accessing VUMC resources is permittable under their respective Visa conditions.

What additional forms does VUMC require?

Along with completion of an Occupational Health Screening, VUMC requires the following forms to be completed once your VU application is transferred to the VUMC system.

My research project and access are required for longer than one year; how can I renew my application?

Before your access expires, you will receive notice from VUMC with an option to renew . If no changes have been made since your initial application, then your access can be extended for another one-year period with an updated confirmation from your VUMC sponsor and an update to your heath screening (e.g. annual TB skin test and flu vaccination). If there are changes to your research project or acceess needs, then you must update your application to reflect these changes before a renewal can be issued.