The Interfaith Council hosted their annual Interfaith Panel on Tuesday, February 26th in the Student Life Center. A representative from the Atheist, Baha’i, Bhuddist, Catholic, Hindu, Jewish, Mormon, Muslim, and Protestant community made up the panel. The topic this year was Sex and the Sects: Gender Roles in Religion, where the representatives each spent 5 minutes sharing their knowledge on the roles of men and women, the attitudes towards non-traditional genders, and how they view the conflicts between their religion and contemporary perspectives on sexuality.

This was the largest Interfaith Panel audience we’ve ever had, with over 90 people from the student body and community came to attendance. After each panel member spoke, there was a Q & A section with questions from the audience. As the questions kept pouring in, no one wanted to leave. After the event multiple people commented how much they enjoyed the event and the diversity in the panel members. We can only imagine what next’s years topic will be?

Click the photo for images from the event, the full video of the event is below. 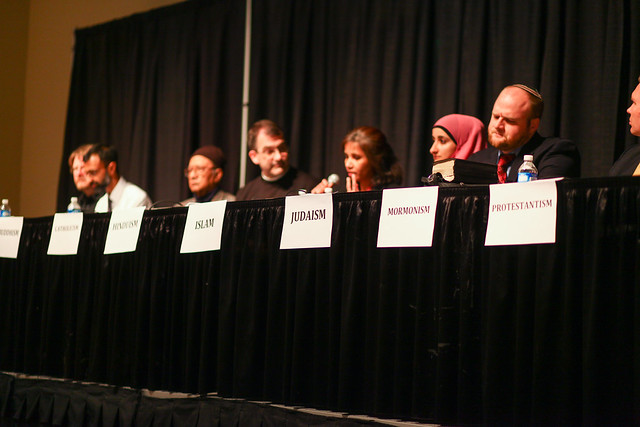