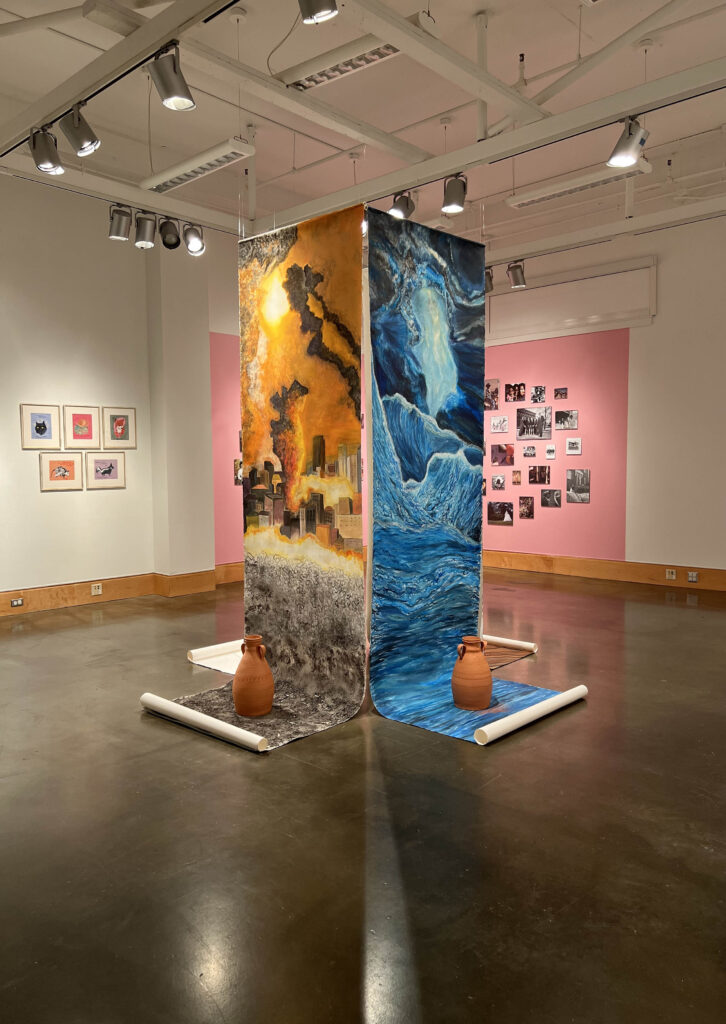 My Senior Exhibition focuses on the struggle of refugees to help mediate the ongoing crisis. Being the granddaughter of a refugee who escaped war and grew up in the heart of Jordan’s refugee camps, I am fortunate to be able to use his story and my education to forge a better path for those in similar circumstances. I use the intersectionality between my three majors—Political Science, Philosophy, and Studio Arts—as a lens for exploring elements of our shared humanity. Political Science helps me rationalize the political climate of our world. Philosophy gives me the perspective to understand concepts difficult to relay in words while Art gives me tools to allow people to understand these difficult concepts through interactive imagery and/or installations. Thus, art allows me to tell a story to better understand myself and my heritage.

From before my grandfather was a refugee leaving Palestine in the late 1940’s, to the modern day struggle of Syrian, Ukrainian, Venezuelan, and other refugees, the similarities in the landscapes they travel and hardships they overcome is astounding. Thus, the goal of my four-part installation is to use refugees’ journey as a guide to understand themes of travel and belongings. By letting my viewers move from one landscape to the next, I take them on a journey to understand refugees’ experiences of losing their physical and metaphysical belongings.

My audience will begin at a painting of a city in flames as the smoke of explosions fills the sky and buildings fall to the ground: the catalyst that forces people to traverse harsh climates in search of refuge. Viewers will then travel across storming seas and scorching deserts in the second and third paintings respectively, to feel the refugee experience. The final panel is about the wind that carries refugees through this journey so they can finally breathe, letting go of grief and struggle. It shows the man who I owe my existence and education to, my grandfather. The man who gave up his right to an education, traveling from one place to the next to forge a future for the next generation. I drew this panel in pencil because my grandfather loved them and saw them as a symbol of education. He refused to throw them out until they were impossible to use.

My installation also looks at the belongings refugees have to leave behind each time they overcome a stage of their journey by displaying vessels on my paintings. The painting of the explosion which begins the journey for refugees has a whole vessel. The second painting of the sea shows a cracked vessel, which symbolizes the refugees beginning to lose their belongings as they travel. By the third painting of the desert, the vessel has broken, and by the final painting of my grandfather letting go of the key to the house he left behind, the vessel fragments have almost fully disintegrated. This reflects how refugees are forced to let go of everything by the end of their journey. The key used is the universal symbol of suffering and longing for return for many Palesitian and Syrian refugees today. My vessels also take the form of traditional vessels held on the heads of Palestianan women historically as they traveled to fetch water and/or supplies. I use clay vessels because the medium carries the rich history of the land it’s from and represents Arab culture. Similarly, vessels are important for my work because while they can carry physical belongings they also hold metaphorical belongings: memories and stories of people’s lives.

Nonetheless, Mona Hatoum was a major influence in the thematic approach to my work. Her ability to discuss difficult concepts in simplistic installations inspired me to think about how my works interact together and the role my audience will have in interacting with them. Similarly, Jennifer Bartlett’s use of oil paintings with sculptural elements helped me think about the relationship between my paintings and vessels and how I attempt to juxtapose them together to give new meaning to the refugee narrative.

Mariam Nadi is a New Jersey born artist triple majoring in Studio Art, Philosophy, and Political Science. She has always been intrigued by the intersection between those three majors for she believes each helps bring about a new lens for exploring elements of the other. Mariam recognizes that she grew up privileged enough to be in a place where she was surrounded by people who inspired her to think about the world in nontraditional ways, constantly pushing her to try new things. Having been born to immigrant parents who were the children of refugees escaping war, she has also been fortunate enough to be able to use her educational experiences to learn how I could forge a better path for people living in situations similar to theirs. This helped shape her interest in Art. For Mariam, Art has always been an avenue for to share her thoughts about the world, reflecting on what people can do to help make it a better place. It has also been an incredible venture for exploring how to relay difficult concepts, such as those in political science and philosophy universally; through a language not easily translated in words, and not easily understood without emotional appeal. This fuels her love for Art as it allows her to not only be creative, but to tell a story to better understand herself and the world around her.

Her work about children and adult’s view of war has been featured in Vanderbilt’s Immersion Creative Showcase in the Fall of 2021 and Spring of 2022 editions of the exhibition. Her Senior Honors Thesis in Political Science works to understand the role of Art and Imagery in mobilization, and ultimately, the success or failure of social movements. She currently interns at Millions of Conversations, an organization dedicated to holding conversations to mediate conflict to help make the world a better place. Mariam hopes to continue to use all her experiences to make Art that touches people’s hearts, and fuels their desire to be a positive change in the world.