For the past eight years, I did not fully appreciate the significance of Veterans Day. Sure, I participated in Veteran’s Day events, spoke about the importance of reflection, and appreciated the increased volume of “thank you for your service” comments I received. But to be completely honest, Veterans Day for me boiled down to little more than an opportunity to get a free Denny’s breakfast, a free Buffalo Wild Wings lunch, and a free Applebee’s dinner. While on active duty, this was a common sentiment. Units would publish lists of Veterans Day deals available to all of their Soldiers, and Soldiers would wager on who would be able to get the most free stuff in a single day. It was comedy for us. After all, we were all Soldiers. All of us raised our hands and volunteered to serve. Inside our bubble, none of us were special or felt entitled to any recognition for our chosen profession. We found humor in Veterans Day and the willingness of others to place us on a pedestal, even for a day. But for me, buried under the veil of humor was a subdued sense of guilt. Guilt that I did not deserve special recognition. Guilt that the service of others, the Soldiers that I led, was far more deserving of recognition than my own. But in getting to know my Soldiers, I discovered this guilt was not unique to me. It was shared by all of the men and women that I served with, masked under the guise of self-deprecating humor, bravado, and nonchalant apathy. But why was this the case? 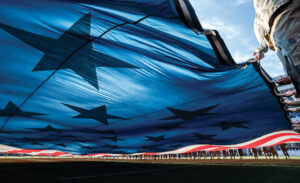 We’ve all heard the slogans. Be part of something bigger than yourself. Serve your country and fight for the freedoms of all Americans. While those statements are by no means false or hyperbolic, they mean very little when you are manning a patrol base in a foreign country, tired, hungry, dirty, counting down the days until you are able to see your family and loved ones again. At that moment, your country or the freedoms of her citizens are the least of your concerns. In fact, neither is your own self-interest. You are thinking about the men and women to your left and right. You are thinking about their families, their loved ones, and constantly questioning whether you have done everything you possibly could to give them the best possible chance to get home.

This year will be my first Veterans Day since swearing my oath that I am no longer wearing a uniform and that feeling of guilt is still as prevalent as ever. But for the first time, I am not surrounded by those I feel deserve recognition on a daily basis. This lack of familiar insulation has forced me to reflect upon that guilt in order to understand why it exists. It was in this reflection I have found the deeper purpose of Veterans Day, and now understand the reason behind why those who haven’t served are so grateful for those who did and did so honorably. It is about the men and women to your left and right. It is about the 1% of Americans and immigrants who wrote a blank check to the United States Constitution payable in the amount up to and including their lives to do their part to get you home. It is this sentiment that flows deep in service members that drives the feeling that the service of others is more meaningful, impactful, and more worthy of praise than your own.

To my fellow veterans: This Veterans Day, remember those who you served with. Remember the sacrifices they were willing to make in order to give you the best chance to come home. When a feeling of guilt or inadequacy begins to take hold, remember that your service was just as important to those on your left and right as theirs was to you, and even more valuable to those who did not serve. You are part of a select group who volunteered to place the wellbeing of America’s sons and daughters above your own, and that is deserving of recognition.

To those who have not served: This Veteran’s Day, take time to thank veterans in your life, but do so understanding why it is we serve. Rather than saying “Thank you for your service” and going about your day, take the time to talk to them about their experiences and learn about the men and women that they served with. Show appreciation for veterans by honoring those who we revere more than ourselves, the men and women to our left and right. To quote Distinguished Service Cross recipient, Major Dick Winters, “I am not a hero, but I served in a company of heroes”.