About the ISEE Bangladesh Project

The relationship between environmental conditions and human migration is multidimensional and complex, and few studies have addressed exactly how this two-way relationship operates and under what conditions environmental concerns affect migration decisions. We observe that the complexity of issues facing low-lying regions such as Bangladesh demand a significant advance in knowledgebase on migration and human-environment interactions. From this view we have identified the overarching goals of our project to be: (1) identify social and environmental factors most important in maintaining stability, from households to communities, or for motivating decisions to migrate; (2) determine how these factors differ within and across diverse social and physical landscapes; and (3) assess how these variables are likely to interact under a variety of scenarios for social and environmental change.

Bangladesh is a young nation with a long history of human suffering, yet ingenuity and resilience emerge in the face of poverty, environmental change, and natural disaster. Within a small geographic extent – 160 million Bangladeshis live in an area the size of Iowa – the country exhibits diverse human-environmental exposures that are representative of many low-lying coastal areas of South Asia. The poverty rate has been declining and now includes only about one-third of the population, a success due in part to a 5-6% annual economic growth rate for the last decade. These gains have come despite internal political turmoil and devastating natural disasters that occur regularly. Since the 1970 Bhola cyclone and War of Independence and 1971 famine that followed, Bangladesh has been a country of continuous research and policy innovation in the area of sustainable development in a context of environmental instability. Its present environmental and social landscape make Bangladesh embody the ONR-MURI call to consider low-lying economically challenged countries, where social and political instability has manifested in recent conflict and remains a not-too-far-removed threat.

Bangladesh and its deltaic landscape exhibit a broad range of environmental, economic, and social circumstances that are relevant to many nations in South and Southeast Asia. In the southeast, refugees from Burma who migrated because of cyclone Nargis (2008) co-mingle with past generations of Arakan migrants and indigenous Hill Tracts populations in a context of flash floods and coastal exposure to cyclones and storm surges. To the west, near the Indian border, communities with significant Hindu/Muslim diversity have transformed a locally based agricultural economy into a place of industrial shrimp farming resulting in increased salinity of the groundwater. As a result, farmers unsustainably purchase bottled water or develop rain catchment systems. In between, a dynamic population survives on a terrain of changing shorelines, declining fisheries, and tourism. Migrants both enter the region from the east and exit the region to seek work in urban areas, primarily Dhaka. Finally, much of the country’s success at feeding its population and improving its livelihood has been due to environmentally responsive developments in agriculture and growing export fueled by increasing urban production industries. The growing megacity of Dhaka has been leading the economic growth, but urbanization has put unsustainable pressure on the water supply. Therefore, because each of these settings have experienced multiple catastrophes – floods, cyclones, arsenic – that mirror many of those affecting the broader region, the land seems unable to sustain the population at level of security needed to maintain long-term stability.

In sum, Bangladesh is increasingly affected by the longer-term strain of encroaching sea level, land subsidence, and access to safe groundwater and their convergence with an increasingly dense coastal population. It is a place where environmental stresses are growing alongside of society’s capacity to deal with them – which, though, will control the future? On these issues the Bangladesh government and public are being proactive in trying to limit the impacts of future environmental change through national programming, exemplified by the  Bangladesh Climate Change  Strategy and Action Plan through the Ministry of Environment and Forestry.  This program involves strategies aimed at the coupled human-environment landscape. Under what conditions do people turn to the government and non-government organizations for solutions? Under what conditions do individuals, households, or even whole communities choose to migrate in an effort to secure their livelihood. What effects do social factors (such as communal ties) and environmental events (such as cyclones) have on decisions of whether and where to migrate and for how long?

Our research starts from the observation that both the people and the landscape of Bangladesh have a long history of resilience. We focus our study in southwest Bangladesh because this region has (a) a diverse physical environment, (b) variation in the ways that communities provide for themselves and interact with one another, and (c) is vulnerable to a broad range of natural and anthropogenic environmental stresses. Within this varied human and physical landscape, we seek to identify patterns of resilience and adaptation to environmental challenges and to understand the role of migration, both as a strategy to enhance resilience and as a response to failures of resilience.

1. Identify the types and characteristics of adaptive community models that comprise the socioeconomic landscape of southwest Bangladesh.   How do groups self-organize to be successful in the face of changing environment, and social and economic pressures?  What are the strategies and sources of livelihood? How do these vary with socioeconomic differences?

2. Identify the factors (physical, engineered, political, economic, social) that are most important in defining adaptive community models, including their successes, failures, and resilience.   Which factors exhibit positive or negative influences on the various community strategies?  Which factors are trending toward increasing or declining importance, and over what spatial and temporal scales are they felt?  Are factors endogenous or exogenous, and under whose control?

3. Quantify dynamics of the natural and human-modified physical landscapes relative to sea-level change. What is the mass balance of sedimentation relative to rising sea level and subsidence? What are principal sediment sources and transport pathways sustaining vertical landscape aggradation?  How has poldering of the inhabited islands impacted landscape dynamics?

4. Assess the source and dynamics of water supplies in the region.   Where and why are there locally fresh groundwaters within a regionally saline aquifer? What role do anthropogenic modifications of the floodplain play in recharge?  How are tidal channels interconnected with the groundwater system?

5. Determine how these physical and human systems are coupled and co-evolving . How are communities adapted to the dispersed and variable sources of potable water?  How does the relationship between people and their environment vary with different livelihood strategies?  How have community resilience and household vulnerability changed in response to engineered structures, shifting land use patterns, natural hazards, and long-term environmental change?

Study Area
We chose to set our research in the context of the poldered (embanked) landscapes of southwest Bangladesh (Fig. 1), where environmental stresses from groundwater salinity, waterlogging, storm surges, and land-use change are among the most severe in the nation (Wilson and Goodbred, 2014). Social factors such as poverty, politics, cultural diversity, and shifting livelihoods associated with the shrimping industry are also relevant, interacting strongly with these environmental factors (Fig. 2).  Within this region, we focused our initial project efforts on a single poldered island (Polder 32) that was devastated when its embankments were breached in five locations during a May 2009 cyclone (Fig. 3; Auerbach et al., 2015).  Most of these breaches were not repaired until spring 2011, with one major breach still open today.  During much of the intervening two years, the landscape remained intertidal, displacing 1000s of families and precluding agriculture or shrimp production, two of the principal livelihoods in the area. We have studied this area in depth and continue several of our monitoring efforts there. 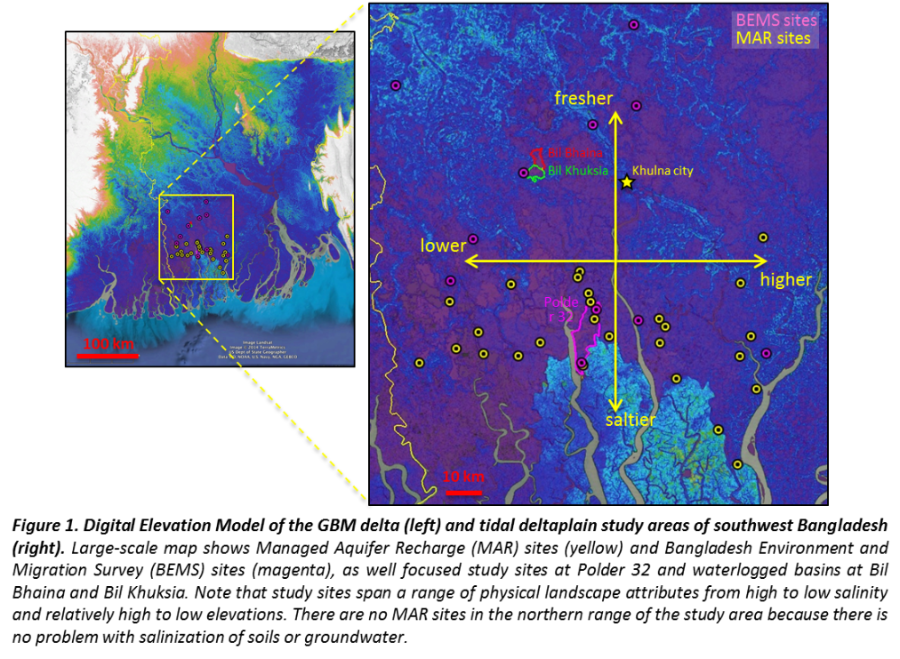 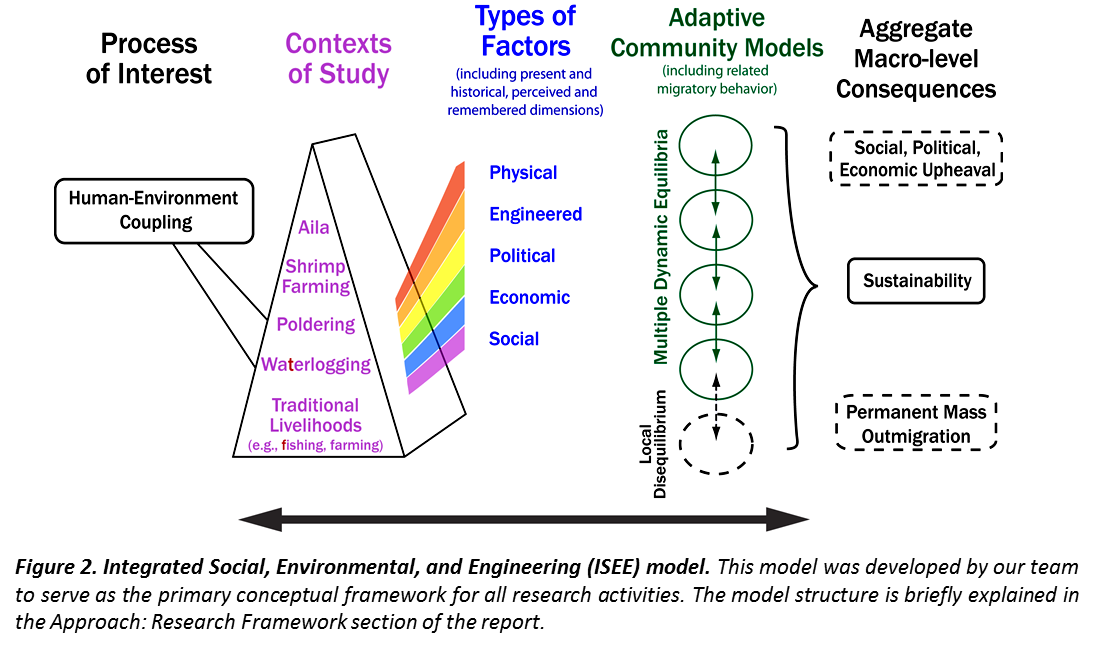 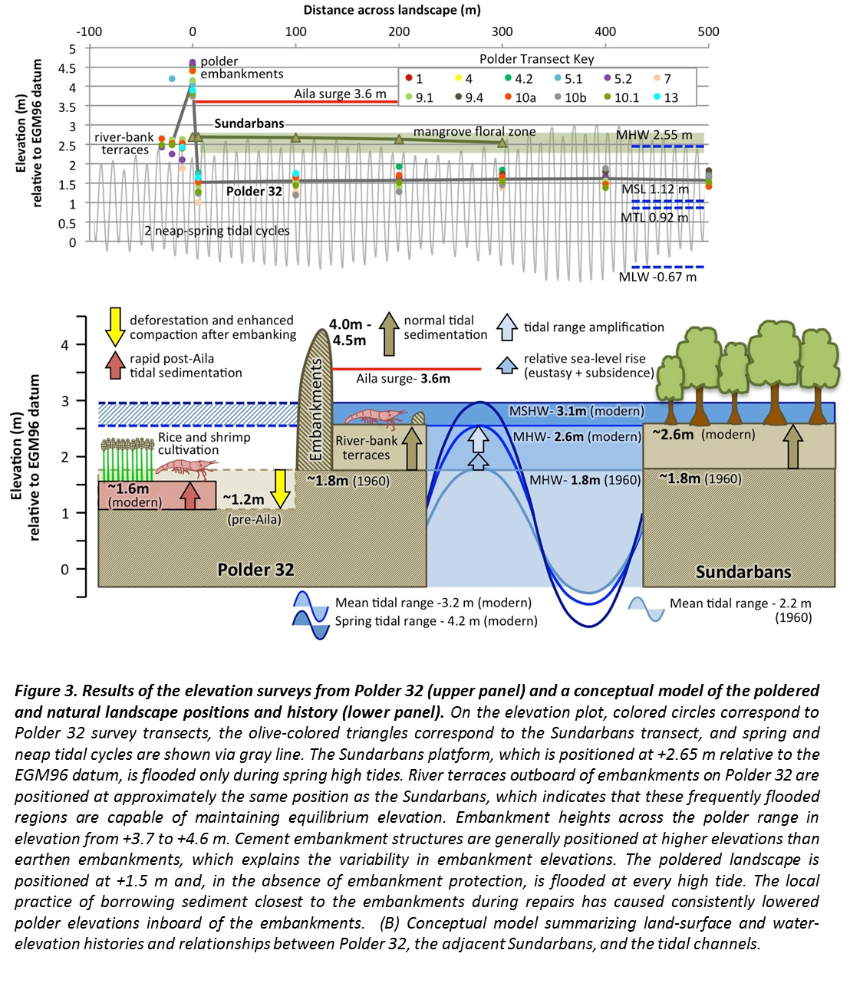 In the past year of the project, we have now scaled our field research up from Polder 32 to include the entire ~6,000 km2 of poldered landscape in southwest Bangladesh. These new phases of investigation involve 35 discrete study sites across the region  (Fig. 1), as well as new sites that experience severe flooding and are being managed for controlled inundation and sedimentation (Tidal River Management – TRM) (Fig. 3)

Research Framework
Our project has been developed within an overarching framework that we designed in year 1 and refer to as an Integrated Social, Environmental, and Engineering (ISEE) model (Fig. 2). This ISEE model provides the framework in which to relate diverse social, environmental, and engineering data toward the overarching goal of understanding human-environment coupling. The structure allows research to focus on any number of contexts (shown in purple), each of which defines a unique perspective on the coupled human-environmental system. The study context then provides the lens through which we can isolate, identify, and quantify the most important factors (shown in blue) that influence human-environmental interactions in the context of study. Interactions among these relevant factors are then analyzed to identify patterns of action by which the populace makes its livelihood and organizes its communities. By studying these patterns and relationships, the real communities of interacting people are revealed, not those “communities” that exist only as a village name or political boundary. It is these self-identified, self-organized communities in which people of the region interact with the physical and socio-economic landscapes. Under scenarios of stability, these communities define a dynamic equilibria (shown in green) through which each community is able to provide for themselves under ordinary conditions, and which are also sufficiently flexible to adapt to changing stresses in the physical and human environments. A major underlying hypothesis of this conceptual framework is that a community whose livelihoods comprise multiple dynamic equilibria will be more resilient, because it can adapt to the collapse of any single equilibrium by shifting activity to another.

Activities in Year 3 have centered on the scaling of ideas and observations via new field campaigns across the region coupled with integrated remote sensing (Fig. 1). In terms of testing ideas, the field-based teams continue to analyze data with the goal of evaluating emergent field hypotheses against carefully documented data-based observations. This process has involved activities from the referencing of GPS, land, and water surface elevations to a common datum, to the coupling of groundwater transport and geochemistry, to the coding of social-science field interviews for grounded-theory qualitative analysis, and to the completion of an extensive household enthnosurvey on livelihoods and migration history.