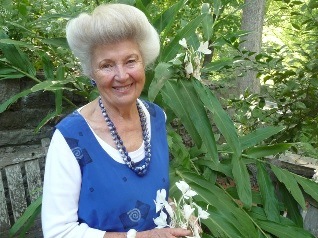 Where did you grow up?
Born in Prague, Czech Republic into a loving and educated family. My Uncle had started his diplomatic career in the Czech Embassy in Washington and we lived in grandfather’s apartment house with cousins or grandparents on floors below us and above us.  School and church were only a block away next to a fine park.

Since my parents had both done some work in the US, spoke fluent English (as well as four other languages) and had friends here,  it was possible for them to get visas to travel to safety in the US shortly after Hitler’s tanks rolled across Czechoslovakia in the summer of 1939.

Immersion into English for my younger brother and me started with learning the necessary phrases to coax a friend’s dog to perform his tricks, it continued in school and at friend’s houses where we listened to “Lone Ranger” on the radio until it began to make sense.

When the US entered the war, my father had to leave his job with US Steel in New York, since he was not yet a citizen. He became acting dean of the Aeronautical Engineering Dept. at North Carolina State College in Raleigh. There, I became a teen age southerner and acted in community theater plays, took piano lessons and ballet and walked to school under osage orange trees. I can remember hearing my mother lecture on Central Europe to community groups and going with her to pick up goose eggs at the Agricultural Extension Farm because they were not rationed. It was a happy time when I made friends for life at a Girl Scout Camp in the Smoky Mountains and spent one summer in New York with my dance teacher taking lessons from a Russian ballet teacher!

As soon as my parents became American Citizens, after the required five years, they moved to Washington DC where my dad had been commuting to serve as a consultant to the US Dept of Defense on Central Europe. Since the city was crammed full and they were lucky to get a studio apartment and mother took us to visit some New England boarding schools where she settled on High Mowing, a Rudolf Steiner School in south central New Hampshire. She lived near by with us until there was room for us at the school. My brother and I left home for good at 11 and 12.

I turned 15 in Prague where we went immediately after the war ended, on a troop ship. It was a very sentimental journey for my parents as they showed Eugene and me the Europe that they had left behind. We entered the Czech Gymnasium close to mother’s parents home and prepared to “tough it out” studying 16 different subjects every week – in Czech. Then came the election which put the Communists into power. Again, we left friends and a loving family to return to America.

I continued on to Radcliffe College in Cambridge and majored in Architecture.

Who is your role model and why?
When we arrived at Vanderbilt, in 1959, from Pasadena and Riverside, CA, I met Molly Todd and Miriam Cowden very soon and they became my role models and still are! I appreciated their significant involvement in the Nashville Community, their keen ability to observe and respond to those around them in a very caring way.  Also, I admired their sense of humor and wide range of interests. My mother has also been a role model, adaptable, resilient, and plucky with a great sense of humor.  She maintained her wide-ranging intellectual interests until the end of her life, at 100.

What do you like to do in your leisure time?
Too many things! Travel is high on the list, which is good, because our four children settled in Berkeley, California, Washington State, Wisconsin and New York City. My husband of 62 years and I have been to all the continents and most more than once. Gardening and serious cooking with entertaining in mind, keeping up with current events and good books, theater, music, art and crafts and ballet are all on my list of interests as well as writing about it all to keep up with friends and family around the world.

How did you choose your career and/or volunteer path?
At Radcliffe/Harvard I thought I would major in History and Lit but as I understood myself better, and may have been influenced by the family with whom I had a room and board job as well as a one-time boy friend.   It all led to a BS in Architecture and my passionate interest in community planning as well as architecture.  While my husband finished his PhD at Johns Hopkins, I got a job with a prominent Architect in Baltimore where I was the only woman to ever go to AIA meetings – such a male dominated world it was!

What is something you wish everyone knew about you?
When Vanderbilt brought my husband to Nashville from California in 1959, I joined the League of Women Voters right away. That is how I made good friends and learned about the community. It led to all the community service I have enjoyed until now when I am still active on the Conservancy Board for Centennial Park and the Parthenon.

It was during the years on the Park Board that I could initiate and raise funds for the Fannie Mae Dees Park Sea Serpent, the Athena in the Parthenon, “Come Play” near the Commons on the Peabody Campus and the Ron and Judy Lederer tile mural at the Cumberland Museum. This mural that shows a cross section of Davidson Co. geology and landscape is in need of a new home now.

I have enjoyed correspondence and providing support to Foster Children for years, first through “Plan International”, since persuading my high school to adopt one and, for the past 25, years a Native American child through “Futures for Children”.

How did you come to Join the Vanderbilt Woman’s Club?
With four small children at home and a newcomer to the community, the VWC gave me a chance to make friends across the departmental divides. The programs and social events were an opportunity to get out into the adult world once in a while!

What’s one thing you like most about the VWC and do you have any suggestions for our club?
I am glad that the Club can provide scholarship help to students and I  appreciate that most of the programs are so interesting that my husband of 62 years enjoys going to them with me.