The 11th Annual VPA & Shared Resources Symposium, sponsored by Office of Postdoctoral Affairs in the Graduate school and The Office of Biomedical Research & Training (BRET) was held on April 19, 2017.

This day-long event was organized for Postdoctoral Fellows to showcase their research, network with invited speakers, peers, faculty, and get career tips/advice from invited speakers.

Numerous prizes were awarded throughout the event including Postdoc of the Year, Mentor of the Year and best poster awards among others.

Pictures from the Symposium can be found here.

Below, you will find the following information about the 2017 VPA Symposium:
Keynote Speaker, 2017
Breakout Sessions, 2017
Lightning Rounds, 2017
Full Schedule, 2017 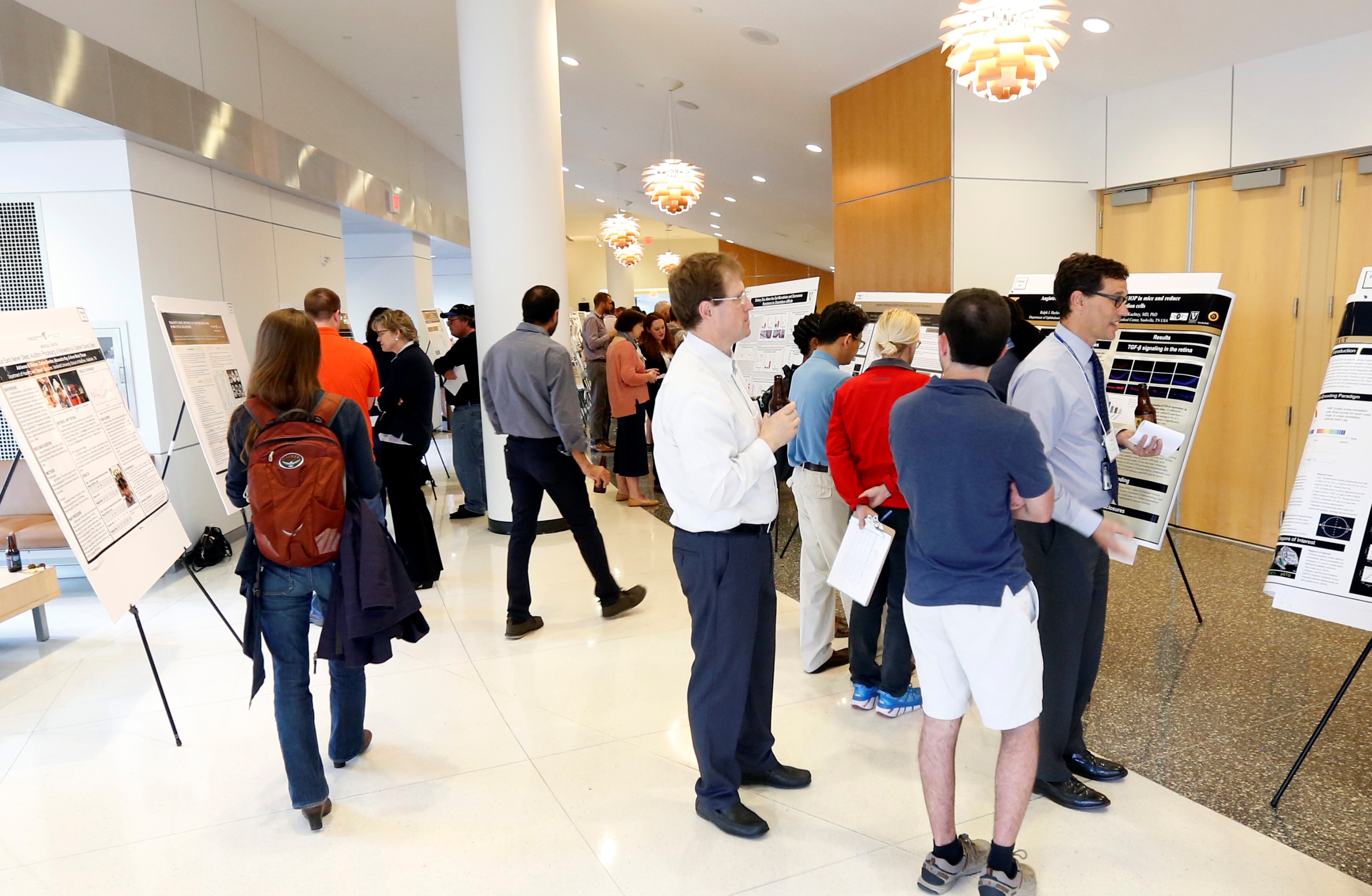 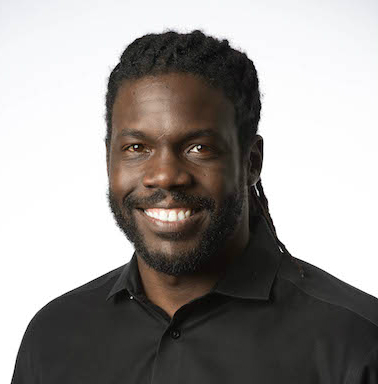 Marcus Whitney is an entrepreneur, investor, writer and public speaker. In 2015 he founded The Unlikely Company with the sole mission of using entrepreneurship to help solve income inequality by providing tools, programming and funding to “unlikely” entrepreneurs all over the world. He is also the Co-Founder and President of Jumpstart Foundry, the leading accelerator in the Southeast. He co-founded Moontoast, Southern/Alpha and Clariture Health and serves on the board of the Nashville Entrepreneur Center. He was born and raised in Brooklyn, New York, but he planted his roots and has thrived in Nashville, Tennessee.

Marcus set the tone for his platform with his 2014 TEDx talk in Nashville entitled “Nashville Hustle: To Change Your World, You Gotta Lie a Little.” His talks often center around counterintuitive truths that enable people to be empowered and control their destiny. Marcus’ personal journey from humble beginnings to entrepreneur, mentor and respected leader has given him a unique point of view that resonates with audiences of all types: If you want to achieve something, you can. It’s that simple.

Through The Unlikely Company, Jumpstart Foundry and his other roles, Marcus has left a tremendous impact on Nashville’s red-hot entrepreneur scene and the community at large. He continues to bring hope to those who want to control their destiny through entrepreneurship and make a positive impact in their communities.

This year we are introducing breakout sessions covering disparate career development topics. Sessions will be held during lunch and participants may chose to attend any one.

Seth Ogden is a Registered Patent Attorney at Patterson Intellectual Property Law firm in Nashville, TN. He obtained his B.A. from University of Virginia and a Ph.D. in Caner Biology from Vanderbilt University in 2009. He later shifted his career focus, bringing his talents to the realm of intellectual property, obtained a J.D. from American University Washington College of Law in 2012 and began litigating on behalf of pharma innovators. Seth is focused on patent infringement litigation and patent prosecution in the fields of biotechnology, pharmaceuticals, medical devices, industrial chemicals, software and electronic devices. He has also provided non-infringement and invalidity opinions and strategic positioning reports in the areas of biotechnology (diagnostics and biologics), pharmaceuticals, industrial chemicals and material science. In addition to patent matters, he has handled a range of trademark and copyright issues, and also maintains a robust veterans’ benefits pro bono practice.

James performed his PhD research at Newcastle University, England in David Lydall’s lab. During this time, James used budding yeast as a model organism to study telomeres, which ‘cap’ chromosome ends and are dysregulated in cancer cells. In 2011 James began his postdoctoral training at Harvard Medical School, in Johannes Walter’s lab, where he became a Charles A. King trust postdoctoral fellow. During this time, James exploited a cell free system, derived from frog eggs, to develop biochemical approaches to control and monitor DNA replication. These techniques permit the dissection of DNA replication and DNA repair pathways that are targeted during cancer chemotherapy. In July 2016, James joined the Department of Biochemistry at Vanderbilt University, and became a member of the Vanderbilt Ingram Cancer Center. The Dewar lab is currently focused on identification of new replication and repair pathways and development of a biochemical system to study telomeres.

Anita knows a good bit about the challenges and joys of being a postdoc. After graduating with a PhD in Neuroscience from Chiye Aoki’s lab at NYU (in January of 2005), she went on to do ten years of postdoctoral training! The first five of those years were spent working with Michael J. Hawken at NYU, the second five with John Reynolds at the Salk Institute for Biological Studies in San Diego. After a successful NIH K99/R00 Pathway to Independence grant proposal, Anita hit the job market. She applied to faculty positions at various state and private universities across the US,  and as her back-up plan she secured US citizenship in preparation for an application to the AAAS Science Policy Fellows program. Anita ended up with a few job offers to consider in her second year on the job market. She finally accepted a position here at Vanderbilt and started “on the track” in 2014. Today she runs a busy lab, with two postdocs, four grad students, and three undergrads pursuing diverse projects. She teaches both lab and lecture courses at the grad and undergrad level. Her current career challenges are navigating “the Track”, and this tricky funding environment. During her years as a postdoc, in addition to research, Anita did adjunct teaching at NYU; volunteer science teaching at economically disadvantaged public schools; and volunteer survey development and data analysis at the United Nations Association. She continues to maintain broad professional networks and attends seminars in a wide range of disciplines – well outside Neuroscience. She read widely in journals outside science (such as economics and foreign policy) and believes these broad experiences an interests not only keep her options open but also made her a more interesting, confident, and rounded candidate on the job market.

Kelsey Hatzell is an assistant professor of Mechanical Engineering and Chemical and Biomolecular Engineering at Vanderbilt. Kelsey was a NSF Graduate Fellow and holds a PhD in the Material Science and Engineering Department at Drexel University in Philadelphia, PA. She has an MS in Mechanical engineering from Penn State University and a BS in engineering and a BA in economics from Swarthmore College. At Vanderbilt, her lab studies solution-processed techniques for advanced materials and material systems manufacturing. Her group also studies the synthesis, transformation, and processing of materials for energy, water, and biomedical applications. The lab is also interested in understanding electrified interfaces and how they can be engineered for electrochemical separations processes. Their approach toward understanding materials and nano-scale phenomena is multidisciplinary using fundamental aspects of mechanical, chemical and environmental engineering, material science, chemistry and condensed matter physics.

Maithilee Kunda is an assistant professor of computer science and computer engineering in the Department of Electrical Engineering and Computer Science at Vanderbilt University. Before coming to Vanderbilt, she worked as a research scientist in the School of Interactive Computing at Georgia Tech. Her work in artificial intelligence, specifically in computational cognitive systems, looks at how visual thinking contributes to learning and intelligent behavior with a focus on interactive applications for individuals on the autism spectrum. She holds a B.S. in mathematics with computer science from the Massachusetts Institute of Technology and a Ph.D. in computer science from the Georgia Institute of Technology, and she currently directs the laboratory for Artificial Intelligence and Visual Analogical Systems.

Mathilde Granke is Senior Data Scientist at axialHealthcare in Nashville TN. She obtained her M.S. in Mechanical Engineering and a Ph.D. in Physics in France. She joined the Department of Orthopaedic Surgery at Vanderbilt in 2013 as a postdoctoral fellow. Her research sought to better understand the mechanisms that lead to bone fractures and explored new methods that could improve the prediction of fracture risk. She joined the data science team at Axialhealthcare in 2016. With the single largest big data pain database in healthcare, her research enables Axialhealthcare to decipher pathways behind chronic pain escalation and opioids abuse and to improve pain care practices.

Lindsey Morris is the Director of Data Science & Analytics at axialHealthcare in Nashville, TN. She obtained her B.S. from the University of Tennessee, Knoxville and a Ph.D. from Vanderbilt University, both in Chemical Engineering. After completing a postdoctoral appointment in the Department of Medicine at Vanderbilt in 2015, she entered the field of data science at axialHealthcare. During her time at Vanderbilt, she worked on a drug discovery project to characterize novel type 2 diabetes therapeutics, served as the President of the Postdoctoral Association, and competed in the TechVenture Challenge hosted by Life Science Tennessee. In her current position, she leads a team of data scientists who perform machine learning, statistics, and descriptive analytics on medical and pharmacy claims data. Lindsey and the data science team at axialHealthcare provide data-driven support tools to physicians and other healthcare providers to better manage their pain and opioid-consuming patients.

Judsen Schneider is a product manager at Concert Genetics in Nashville, TN (formerly known as NextGxDx). Jud performed both his PhD, in Cell and Developmental Biology, and fellowship, in Molecular Endocrinology and Biophysics, at Vanderbilt University. In his current role, Jud operates at the intersection of personalized medicine and routine clinical practice by building products for health plans, clinicians, and hospitals to enable personalized medicine in modern healthcare. Complementing this is 12 years of experience in clinical and biomedical research, and deep experience in genetics, genomics, next-generation sequencing, and high-throughput data analysis. Outside of science, Jud has experience in economic development, government relations, technology commercialization, and education. Jud has founded programs at Vanderbilt University designed to facilitate the commercialization of laboratory-developed technology by building bridges between scientists, businesses, investors, and state government. He is intimately involved with Life Science Tennessee, the state’s biotechnology association, currently serving on the Board of Directors.

BREAKOUT SESSION 4:  Leveraging your PhD skills into a successful career

David is a writer, editor, and occasional podcaster. His overarching goal: to help people communicate their ideas on science and healthcare more effectively. After finishing his PhD in Cell and Developmental Biology at Vanderbilt, David opened a one-man shop called Filament Life Science Communications. There, he created marketing and technical content for early-stage life science and healthcare companies. Recently, after three years at Filament, David joined Health:Further as the Community Editor. In that role he is building an online publication focused on the future of health and managing the Health:Further Festival’s online community.

Abstracts selected for Lightning Round talks were also eligible for awards for best talk.