Posted by romeroda on Wednesday, February 9, 2022 in DH Center Blog.

Architecture, place, and space are powerful tools for humanistic teaching and scholarship. In the past two decades, research that uses technology such as Geographic Information Systems (GIS) and StoryMap JS to visualize, represent, and analyze spatial data has boomed. Spatial humanities that uses digital tools spurs questions about the relationship between actors, institutions, ideas, and space across time. Spatial humanities can incite curiosity and questions and centralize the importance of place, geography, transportation routes, and infrastructure for human behavior and experience. Pedagogically, visualization supports diverse student populations and public audiences. Because of the tight link between space, cognition, and memory, digital spatial tools have an important role to play in disrupting the legacies of colonialism and racism on epistemology. While people usually turn to mapping technologies when they consider spatial humanities, 3D models, photogrammetry, and virtual reality are also a part of this category of digital humanities. The potential of 3D models and VR of architectural sites and history to destabilize what we know and build solidarity against the ongoing legacies of colonialism and racism should be considered carefully and critically. 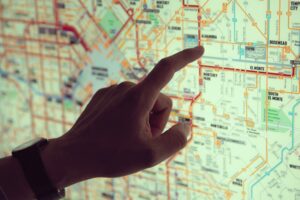 Recognizing the ways institutions and norms form subjects should be at the forefront of research that investigates the potential of 3D/VR for the humanities. Universities (The University of Arizona; Columbia University) are exploring the potential of virtual augmented reality to teach people about the experience of discrimination and racism. The argument goes that allowing people to play the character of an immigrant attempting to cross the U.S. border without papers or augmenting being in a wheelchair in VR may encourage building empathy for these groups. As someone who has learned a great deal from Black literature, art, and history, I can understand thisargument. Toni Morrison’s writing is so powerfully world-building and her construction of Black subjectivity and womanhood both speaks to and shifts how readers understand their own experience of the world. As a white reader, I begin to sense the ways that heteronormative white patriarchal capitalism structure a subject’s ways of knowing and being in the world. Building awareness of others’ experiences is not the same as being someone else or becoming someone else. Ramirez (2020) argues that race, gender, and sexuality structure our entire experience, even in VR and therefore using VR to induce empathy may reproduce social injustice by ignoring intersectionality.

To attempt to inspire empathy via identification can be violent because it re-instantiates relations of domination. Empathetic identification within the context of enslavement is founded on the very violence of chattel slavery, according to Saidiya Hartman (1997). That a white person, or any person, might take on and imagine the experiences of slavery specifically is founded upon the very “fungibility” of the slave—that they are replaceable and interchangeable, the characteristics of the commodity. “Put differently, the fungibility of the commodity makes the captive body an abstract and empty vessel vulnerable to the projection of others’ feelings, ideas, desires, and values; and, as property, the dispossessed body of the enslaved is the surrogate for the master’s body since it guarantees his disembodied universality and acts as the sign of his power and dominion” (Hartman 1997, 21). Allowing users to enter another’s body and walk through their experience with the precedent that they may be able to “become” the marginalized character supports the universalist position of colonial epistemology, that someone of privilege can enter any frame of view because they occupy the “position from nowhere,” the God’s eye perspective (Grosfoguel 2013). This perspective underlies liberal democratic origin stories via the Rawlsian expectation that members design rules for a fair political community “behind the veil of ignorance” where they are raceless, genderless, body-less. The only member who can enter this perspective is the ungendered, unraced normative member of society: the able-bodied white male owner of capital.

What, then, is the normative goal for a VR simulation, and for spatial humanities more broadly?

The concept of subjectivity offered by intersectionality theorists raises criticisms for VR/3D models and empathic identification that use the character of the marginalized and having a user “experience” discrimination or micro-aggressions. Instead of identification with the victimized/marginalized, Ramierz (2020) draws from a Holocaust museum director’s recommendation and takes up the concept of the “engaged witness” for VR. Rather than put viewers in the shoes of the marginalized person, he asks how can VR technology be used to support users to “feel for” the victimized. 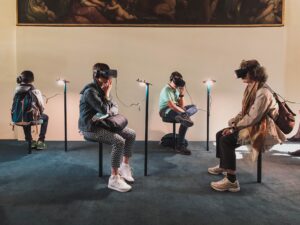 “Feeling for” is slippery; it may be transient. I argue we need a conception of perspective shifting and epistemological destabilizing that draws together more elements of our lived experience thus supporting a deeper integration of the knowledge. Decolonial and anti-racist approaches to space and architecture are a step in the right direction towards this deeper integration; they are a solid foundation for ongoing political analysis, critical thinking, and solidarity.

Digital tools are particularly important for postcolonial and decolonial approaches to spatial humanities because they re-map and re-visualize social and political ontologies that coloniality and racialization lay claim to in human experience. A part of the ongoing power of colonialism and racism lies in the way it structures our ways of thinking, knowing, and being. Although space is thought regularly as an objective variable, its role in subjective meaning-making has historically been and continues to be the central way of building and maintaining this power. Space plays an important role in cognition; it is a part of building and cementing categories, particularly around groups and identity (Enos 2017; Sundstrom 2003). Spatial humanities digital projects and scholarship disrupt colonial definitions and ways of knowing and experiencing geography, landscape, and objects. They challenge standard cartographies, resisting colonial powers’ representation and storytelling. It can uncover colonized and enslaved subjects’ activities, art, and perspectives (Adelusi-Adeluyi 2020; Black Craftspeople Digital Archive). It prompts debate and dialogue around the assumptions and power relations underlying what variables or elements are mapped and what maps hide (Mattern 2021).

My research and teaching consider space and architecture as important locations from which to build analysis and criticism of colonialism and racism, and the relationship between past and present. Learning history through and alongside traveling to and being in a place (place-based learning) can play a provocative role in shifting students’ orientation to how and what we know. Place-based learning can build new relations to past actors; to be in the same spaces, cells, dungeons, camps, rooms, and crawl spaces that humans lived in moves visitors to know history in a different way. Looking at and being in architecture and places makes plain and concrete the relationship between governance, control, and social hierarchy. I investigate the ways in which architectural histories of slavery and colonialism foster shifts in orientation and analytical tools for contemporary injustices.

To use the words of literary scholar Christina Sharpe, how might VR and 3D models of historical architectures draw students to notice the ways in which they are living “in the wake,” in the ripples, repercussions, and reverberations of slavery? “Wakes are processes; through them we think about the dead and about our relations to them; they are rituals through which we enact grief and memory” (Sharpe 2016, 21). To be in the wake of slavery is to be “in an ongoing present of subjection and resistance” (20). While Sharpe is concerned about the Black political collective’s awakening to the denial of Black humanity, her construction of the wake is a place from which white folks could come to understand the construction of “the human” (Wynter 2003) that underpins contemporary political order’s reality. “In activating multiple registers of ‘wake,’ I have turned to images, poetry, and literature that take up the wake as a way toward understanding how slavery’s continued unfolding is constitutive of the contemporary conditions of spatial, legal, and material dimensions of Black non/being as well as Black aesthetic and other modes of deformation and interruption” (Sharpe 2016, 20). Forming awareness of the relations built between groups in slavery and colonialism (thus modernity) inspires active consciousness of one’s positionality in this historical procession, and deconstruction of the fantasies that underly contemporary political order.

I argue in my research that architectural history shifts our politics, and has the potential to build awareness of the wake. The sensation that architectural textures inspire lies somewhere between the physical, emotional, and intellectual. Could this orientation serve as a foundation for solidarity via a deep disturbance with the domination that spawned the modern world, with its interlinking of racialization, finance capitalism, and colonialism? Under what conditions can we use this technology with care to the how and what that students perceive and experience?

As digital spatial humanists, we would be remiss to forget that racial and economic hierarchies have implications for the environmental waste caused by these tools and technologies. Toxic e-waste from technology is transported and dumped in postcolonial nations (Noble 2019) – yet another manifestation of the colonial legacy for space, architecture, and place.

[1] “The wake” is an analytical and linguistic tool for Sharpe (2016). It is 1) consciousness of the ongoingness of Black vulnerability, suffering, and premature death, 2) care and attendance to the historical terror and violence faced by Black people, and 3) awareness of the ways Black lives resist and interrupt this procession.

Grosfoguel, Ramón. 2013. “The Structure of Knowledge in Westernized Universities: Epistemic Racism/Sexism and the Four Genocides/Epistemicides of the Long 16th Century.” Human Architecture: Journal of the Sociology of Self – Knowledge 11(1): 73–90.

Mattern, Shannon. 2021. “How to Map Nothing.” Places Journal. https://placesjournal.org/article/how-to-map-nothing/?cn-reloaded=1

Sharpe, Christina. 2016. In the Wake: On Blackness and Being. Durham: Duke University Press.

Wynter, Sylvia. 2003. “Unsettling the Coloniality of Being/Power/Truth/Freedom: Towards the Human, After Man, Its Overrepresentation—An Argument.” CR: The New Centennial Review 3(3): 257–337.