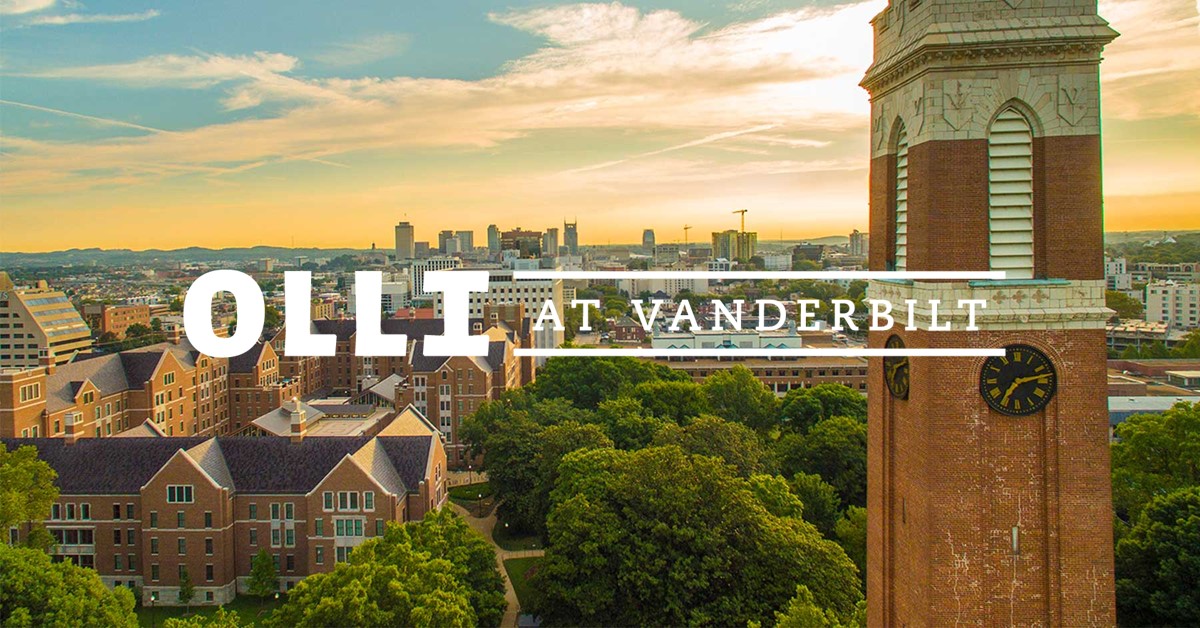 The Osher Lifelong Learning Institute (OLLI) at Vanderbilt University is an inclusive group that strives to organize and present to the greater Nashville community stimulating intellectual and cultural noncredit courses, programs, and trips for adults over 50 of all educational backgrounds.  OLLI focuses on the joy of learning.  Interesting topics are explored with thought-provoking and engaging instructors, who are primarily active or retired Vanderbilt faculty, as well as other community experts.  In a relaxed atmosphere, with no homework, tests, or grades, you have the opportunity to ask questions, contribute ideas, and interact with people who share similar interests.  OLLI participants exercise their minds while making new friends, not only in the classroom but through other educational activities, special events and community engagement.


SPRING ONLINE REGISTRATION IS CLOSED! TO BE CONSIDERED FOR LATE REGISTRATION, CALL 615-343-0700.
Please call our office at 615-343-0700, or email us at oshervu@vanderbilt.edu with questions, or to join the email list!

Exploring the Solar System and Beyond

In this lecture series, we will focus on some of the notable past and present exploration missions that have and will help astronomers unlock secrets within our own solar system, our Milky Way, and beyond. We will begin with an overview of the Voyager missions of the 1970s and 1980s that gave us up-close views of the giants planets Jupiter, Saturn, Uranus, and Neptune. We will also devote one lecture to the story behind the Golden Records that each of the Voyager probes carried. Having discussed some initial discoveries by the Voyagers at Jupiter and Saturn, we will go a bit more in-depth into what we now know about these two planets and highlight what other past missions, such as Galileo and Cassini, and present missions, such as Juno, have taught us about Earth's big brothers. We will then turn our attention to the European Space Agency's Gaia mission and how it, among other things, has accurately mapped the locations of over one billion stars in our Milky Way. We will end the series with a look at the James Webb Space Telescope, including the engineering behind the most powerful space telescope ever built and what we expect to find with its incredible vision. This course will be recorded.

This course will introduce you to the origins, development, expansion, and revival of one of American’s most influential film forms – film noir. By exploring the films of major directors like John Ford, Alfred Hitchcock, and Billy Wilder, we will examine the unique interests, conventions, themes, and iconography of film noir as well as how those preoccupations influenced Hollywood filmmaking more generally. By the end of this course, you will be able to identify the key characteristics of film noir and discuss how they inspired innovations in other film genres and practices. This course will be recorded.

History of the Big Bands and The Classic Jazz Trios

The first three weeks we will study the “History of the Big Bands” taught by Roger Spencer. We will cover the evolution of the big bands from the smaller Duke Ellington ensembles of the 1920s through the eras of swing. We will discuss styles, instrumentation, orchestration, compositions, and soloists. The last three weeks we will study “The Classic Jazz Trios” with Lori Mechem and cover the history, style, and repertoire of some of the most famous jazz trios in history. This course will be recorded.

How to Write a Memoir

How to Write a Memoir is an eight-week workshop designed to motivate and inspire by providing guidelines and organizational tips on how to get started writing a personal or family story to save, distribute, and/or publish. Writing techniques discussed will help participants plan and organize their personal stories. There will be writing exercises during class and each participant will be encouraged to write and share a memoir essay with the group. All classes will be interactive with ideas shared, personal manuscripts read, and group feedback provided. Limited to 16 participants.

This is a meditation class, open to both beginning and experienced meditators. In this course we will explore the intersection of Meditation and Grace. We often think of meditation as something we do, some practice we undertake. While this is likely how we understand meditation in the beginning, over time we may come to see meditation less as an activity and more as a shift from doing to being. Less as effort and more as experiencing “being surrendered” into something larger than our ordinary, familiar consciousness. Being surrendered is not something we can make happen by will. Being surrendered into this larger consciousness is something that happens by grace. Optional reading includes two fine books by the American meditation teacher Adyashanti to structure the class. The two books are True Meditation and Falling Into Grace: Insights on the End of Suffering. This course will be recorded.

Moving Forward, Looking Backward: The United States in the Gilded Age, 1869 to 1898

This course will begin with the completion of the transcontinental railroad and explore the years from there to the Spanish American War. We will discuss the industrialization of major cities along with the "robber barons" (captains of industry), who accumulated vast fortunes during this time. The course will also include immigration, westward migration, the efforts in the Southern states to become a "New South," popular culture during this time, and the United States' becoming a global power. This course will be recorded.

This course will explore the musical sounds of the 1970s as a reflection of and shaping force on the decade. The course will cover a variety of topics and styles including, but not limited to, disco, hip-hop, progressive rock, folk, punk, country, soul, jazz fusion, experimental art music, and the many other diverse sounds of the decade. Through an interdisciplinary study, participants will gain a better understanding of the ways the decade's music was both a direct expression of the cultural context in which it was produced and a profound influence on the trajectory of musical sound and popular culture in the 20th and 21st centuries. This course will be recorded.

If you have a long history of musical experience or have participated in the OLLI Steel Band for several sessions, this class is for you. A level up from the Intermediate OLLI Steel Band, this class moves at a fast pace and focuses on learning the different styles of music that can be played on pan. Latin, jazz, calypso, reggae, rock, and even show tunes are all offered in this class. There is a strong emphasis on proper technique and learning the subtle nuances behind playing the steel pan. The class is highly music oriented and the participants will learn several songs each session, working towards a final recording that you can share with family and friends. Students will be placed according to their preference and the availability of the desired instrument. Participation in Beginning and/or Intermediate level bands is a required prerequisite unless instructor permission is granted. Limited to 13 participants.

This musical journey to the Caribbean is a HANDS-ON experience where you will learn how to play the Steel Drums. This class is open to previous members of the Intermediate and Beginning Steel Bands, as well as newcomers. We will start with the basics since we have had such a long hiatus. During the 7-week term, we will approach proper playing techniques, which we will apply by learning a song. History of the art form and its birthplace will be discussed in class, along with easy “homework” assignments (short YouTube videos, articles, listening examples). Come join us for a low-stress, high-fun musical adventure! Recommendations for enrollment: No musical experience needed; able to stand for 60 minutes; reasonable mobility in fingers, wrists, and arms. Limited to 13 participants.

The Fugitives, the Agrarians, and Vanderbilt

The most famous graduates of Vanderbilt University began, exactly a century ago, to publish a small literary magazine called The Fugitive that ushered in modern literature in the South. Several members of this group went on, in the late 1920’s to form the Agrarians who in their book, I’ll Take My Stand promulgated the last serious conservative criticism of industrial capitalism. Until the last of the Fugitives, and the Agrarians died in 1995, their legacy both honored Vanderbilt and exasperated it. This class will discuss the origin and legacy of both the Fugitives and Agrarians, and some of the more famous members, and where they fit in 21st century southern culture. This course will be recorded.

The Role of Diet and Nutrition in Healthy Aging

This six-week course explores the role of nutrition, diet, and lifestyle in health and longevity as we age. You will learn about the characteristics of the populations that live the longest around the world with a special focus on dietary practices of these centenarians. Professor Pope will address some of the physical, psychological, and social factors that can compromise adequate nutrition with age. Age related changes and recommendations for energy and nutrient needs will be considered with a special focus on protein, vitamin B12, vitamin D, and omega-3 fatty acids. The benefits, adequacy, and fundamentals of widely promoted plant-based diet approaches will be addressed. You will also learn about indications for use and safety considerations of dietary supplements for aging adults. The emerging research on diet’s role in brain and cognitive health will be explored. Current resources and recommendations for the “best diet” to delay age-related disease and decline will be discussed. Attendees will receive recommendations for credible online nutrition information and complimentary pdfs of relevant chapters from Professor Pope’s textbook, Nutrition for a Changing World, that is in use in over 140 universities across the country. This course will be recorded.

Words into Fiction: Readings from the Canon of Eudora Welty

In her essay titled “Words into Fiction,” the American literary artist Eudora Welty (1909 - 2001) describes fiction as “a personal act of vision” in which the artist confronts the mysteries of the human condition. In this course, we shall read from Welty’s collection of short stories and examine the complexity of her vision, which she inscribes in a prose that critics have described as “a quiet greatness.” This course will be recorded.


The Division of Government and Community Relations sponsors the Osher Lifelong Learning Institute at Vanderbilt.