Dwayne has been working as an event planner in higher education for nearly twenty years. His experience and devotion to higher education and working with young adults are exemplified in every project that he supervises. Dwayne has helped implement and facilitate a wide array of events and concerts hosting crowds ranging in size up to 14,000 patrons.

Prior to working at Vanderbilt University, Dwayne served as the Program Coordinator at Georgia Sate University, in Atlanta, GA, where he advised and planned several events, ranging from musical acts to educational programming.

Dwayne began his career at Vanderbilt in May of 2004, and served as the Associate Director for the Office of First Year Programs and then was promoted to Director of the office in 2006. Elliott boosted attendance to non mandatory first year programs and developed a comprehensive first year programs for 1,600 students and their families.

In 2007, Dwayne took the position of Director of Student Campus Events at Vanderbilt University. In this position, Elliott advises the Vanderbilt Programming Board and serves as the liaison for Vanderbilt Athletics for the Office of the Dean of Students. During his tenure, he has increased student involvement and ticket sales for both the homecoming Commodore Quake concert and the Rites of Spring Music Festival. He also produced the very first ever back to back sold out Commodore Quake shows in Vanderbilt history and sold out the very first Rites of Spring Music Festival in its 30 plus year history. In May of 2013, Dwayne took the position of Director for Arts & Campus Events which merged his previous department, Student Campus Events with the Arts & Creative Engagement Office.

Dwayne earned his Master’s degree in College Student Development with a concentration in College Counseling from Appalachian State University and his Bachelor’s degree in Psychology from Appalachian State University. Dwayne is originally from Morganton, NC.  Dwayne loves spending time with his wife Shellian and daughter Amya and in his spare time he enjoys playing golf and attending concerts. David says that he knew when he was eight years old that he wanted to be an artist; he just didn’t know how to tell anyone.  His actual journey in the arts began with musical theater in high school. While studying theater and dance at Appalachian State University, he began to realize that he was being cast more as a dancer. So he focused his training on modern dance and in 1982 began performing with a company in Charlotte, NC under the direction of choreographer Mary Ann Mee. For six years David danced as a soloist in original works choreographed by Mee and other nationally recognized choreographers, plus the repertory works by Doris Humphreys and Charles Weidman. A highlight in David’s dance career is being involved in the first restaging of Weidman’s Christmas Oratorio.  He also attended two summers at the prestigious American Dance Festival at Duke University on scholarship. In 1988, David moved to Nashville to join the Tennessee Dance Theater. This opportunity not only allowed him to continue to perform and choreograph, but also was the catalyst for his training in visual arts.

After studying pottery in Nashville area art programs, David attended the Appalachian Center for Crafts and in 1995 completed his BFA degree with concentrations in clay and fiber arts. David began teaching clay classes at Sarratt Art Studios and became director of the program in the spring of 2004. David has a passion for arts education and brings an array of educational experiences to Sarratt Art Studios from his involvement in various nationally known arts programs from the Lincoln Center for the Arts and Wolf Trap Institute for Early Learning Through the Arts.

David has exhibited his work locally in various fairs and events including the American Artisan Festival, and artclectic. David is working on a series of sculptural beaded vessels. An avid traveler, David has been site leader for two trips to Sri Lanka for Vanderbilt students. If he was not a visual artist, David is fairly confident he would be involved in culinary arts (who doesn’t love to eat?) and dreams of working in a small pastry shop in Paris, France. Lindsey is in her fifth year working at Vanderbilt University. She is originally from Massachusetts and attended the University of Vermont where she earned her Bachelor of Science in Community and International Development. Upon graduation she spent time in New Hampshire and Oregon before moving to pursue a Master of Science in College Student Personnel Services at Western Illinois University. At WIU she worked in the Office of Student Activities where she helped with the planning, implementation, and evaluation of the university-wide social, cultural and educational programs. In addition to student engagement, Lindsey has experience with orientation, community service, and college access programs.  In her free time she enjoys traveling, spending time with friends, and exploring new hobbies such as tennis and taking classes with the Sarratt Art Studio. 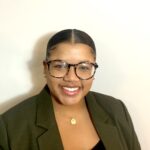 Jaden is beginning her first year as a Vanderbilt Commodore! She is originally from Ohio and is deemed a double Buckeye. She attended The Ohio State University, where she obtained her bachelor’s in communication and her master’s in Higher Education and Student Affairs. During her graduate studies, she worked in the Office of Student Life, where she advised the campus activities board, National Pan-Hellenic Council, and the African American Heritage Festival. In her free time, she enjoys reading, traveling, going to concerts, exploring Nashville, and spending time with her partner and family.

Lupe is a second-year M.Ed student in the Higher Education Administration program. Originally from San Diego, CA, she earned a B.A. in Philosophy from the University of San Diego (USD) in 2021. While at USD, Lupe chaired the programming board and served on the executive board of the student government. Now at Vanderbilt, Lupe is the Graduate Assistant for Arts and Campus Events where she serves as an advisor for the Vanderbilt Programming Board and the Vanderbilt Performing Arts Community. Following graduation, she hopes to continue working in higher education with roles related to student programming, involvement, and leadership.