How do I know if I have an ash tree?

Ash trees are one of the common native tree species in the eastern United States, and they are also frequently planted as street or landscaping trees. There are three common species of ash in middle Tennessee: white ash (Fraxinus americana), green ash (Fraxinus pennsylvanica), and blue ash (Fraxinus quadrangulata). White and green ash are the most commonly planted species in the Nashville area, while blue ash is a common wild tree in areas with limestone soil.

On this page, we won’t try to distinguish between white and green ash. It is possible to separate them based on technical characters, but both of them are equally susceptible to the emerald ash borer (EAB), with a mortality rate of about 100%. So regardless of the species, if you have one of the two, it is not likely to survive without treatment. Blue ash is easily distinguished by its square twigs. It is reported to have an EAB survival rate of about 50%. So it is possible that some blue ash trees may survive without treatment.

The winged fruits of ash trees are unmistakable. In a good year, a tree produces many thousands of them. However, individual ash trees have different genders and only female trees produce fruits. Also, the amount of fruit produced from year to year varies. A particular female tree may produce fruit abundantly one year and produce almost no fruit the next year. If a tree is a male, you will never see fruit on it. So if you see the characteristic fruit, you know that you have an ash tree. If you don’t see fruit, then you need to check other characters. 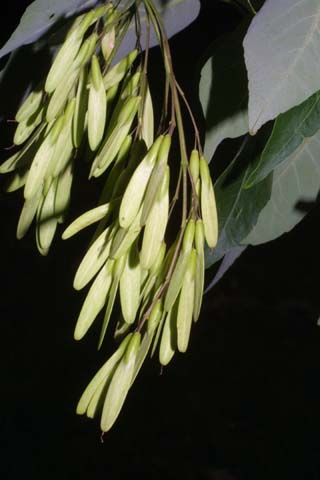 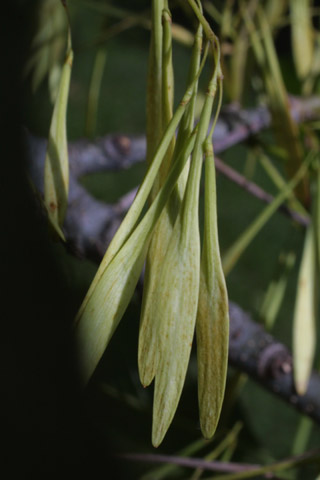 Ash leaves are pinnately compound. That means that the leaflets are arranged in rows on opposite sides of the central “stem” (rachis) of the leaf. White and green ash leaves typically have 5 to 9 leaflets, while blue ash typically has 7 to 11 leaflets. There are a number of common tree species that have leaves like this.
However, most of them have leaves that are arranged alternately on the twig, whereas ash tree leaves are arranged oppositely on the twig. Box elder (Acer negundo) is the only common non-ash, pinnately compound tree in middle Tennessee, and it usually only has 3 to 5 leaflets. As a maple, box elder also has the “helicopter” fruits typical of maples, rather than the “canoe paddle” fruits of ashes. See below for images of box elder. 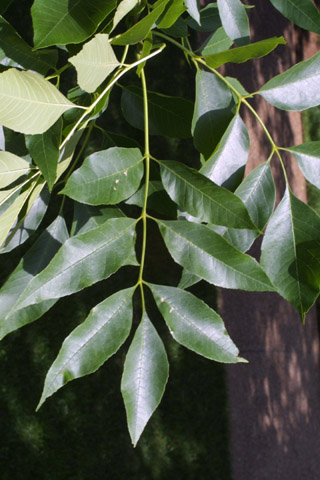 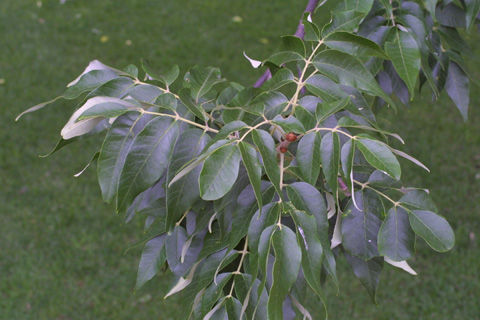 In ashes, leaves come off of the twig in pairs from opposite sides of the twig. The twig color can range from brown to gray, but is NOT bright green (compare to box elder below). 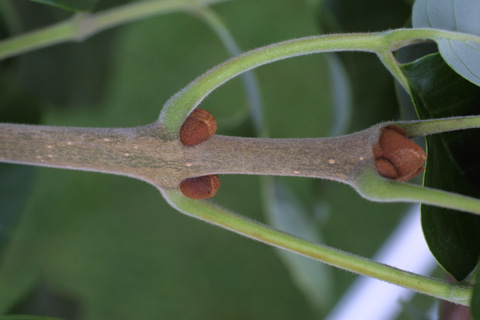 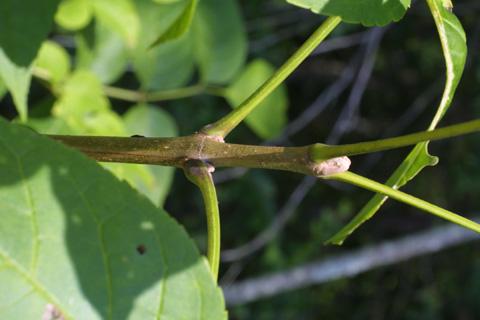 The bark of small ash trees isn’t particularly distinctive. However, large ash trees have a characteristic bark pattern shown below. 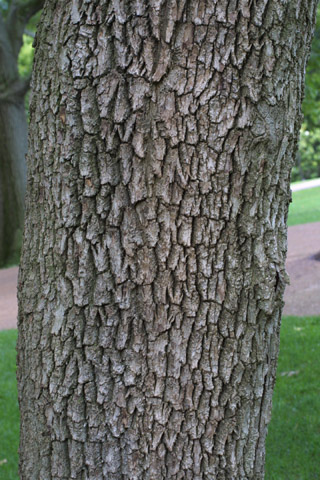 Click on the left image for further information. The photographer of the right image is anonymous.

As mentioned above, besides the ash species, box elder (Acer negundo) is the only common native tree that has pinnately compound leaves that are opposite on the stem. However, it is easily recognized by its fewer leaflets, green twigs, and “helicopter” maple fruits. 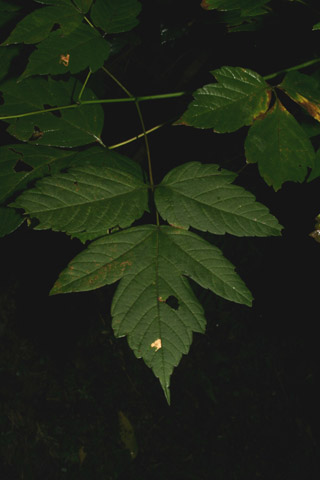 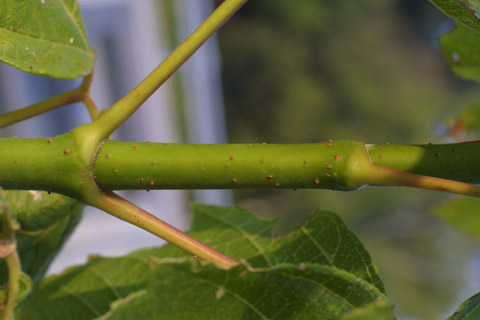 Click on the image for further information about the image. 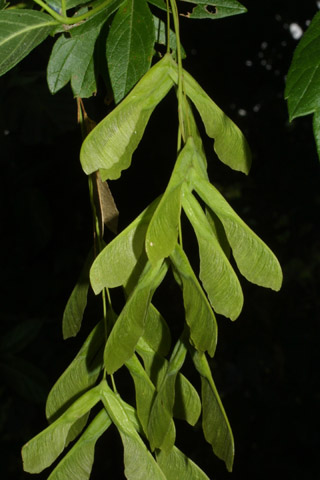 Click on the image for further information about it.

With the exception of the white ash bark photo, photos on this page are copyright Steven J. Baskauf and are licensed under a Creative Commons Attribution-NonCommercial-ShareAlike license. Click on the individual images for more detailed intellectual property and attribution information. For use in Emerald Ash Borer education, these images may be freely used with attribution and without contacting the copyright holder.