Tennessee and the nation have realized enormous social and economic benefits from Vanderbilt University and medical center since the university’s founding in 1873. This presents itself in a number of ways. First, direct Vanderbilt spending on capital, faculty, staff and general procurement creates sales for firms throughout the local and state economies. Second, student spending off campus and out- of-town visitors to Vanderbilt bring additional money into Middle Tennessee businesses. Vanderbilt also plays an important role in economic development by providing an educated labor force, by contributing to the commercialization of academic research and by influencing the revitalization of parts of the community through the built environment, including nearby green spaces, housing and infrastructure such as roadways and utilities. Finally, students, faculty and staff of Vanderbilt contribute thousands of hours of community service each year, promoting health, literacy, education, culture and overall quality of life in the region.

This independent economic analysis prepared by Austin, Texas-based TXP, Inc.,
examines and provides details on Vanderbilt's impact on the state of Tennessee. 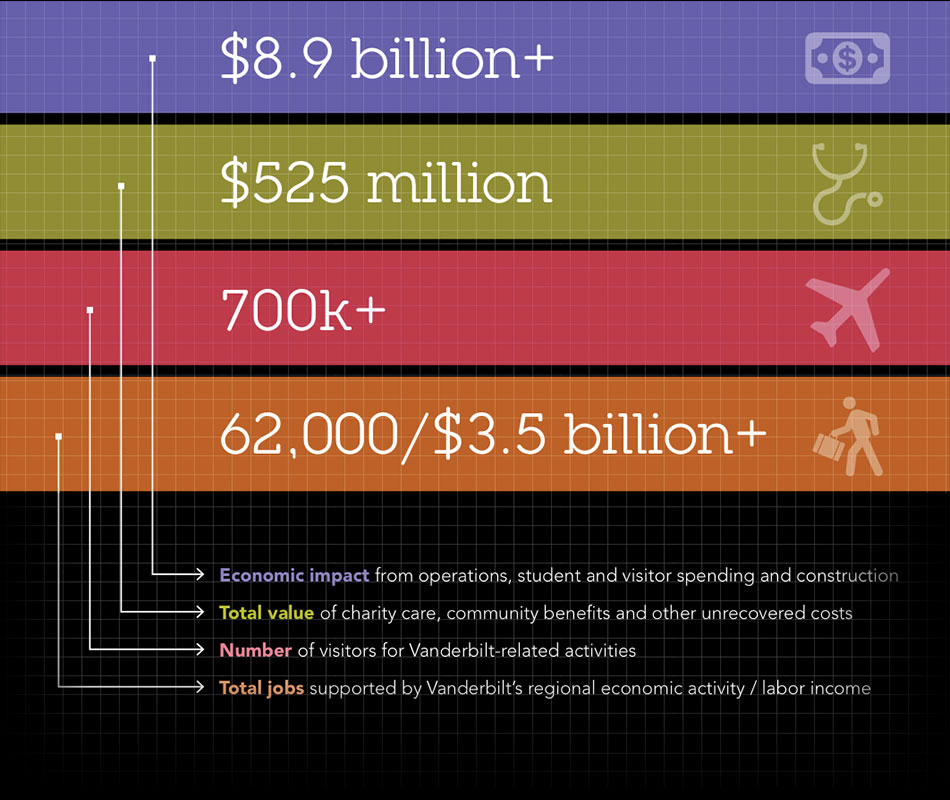 Vanderbilt's impact on the economy is even more robust than the numbers. As the foundry for knowledge and talent, Vanderbilt is the best ecosystem for innovation, a connector to the international economy, a source of entrepreneurial energy, and a job creator for the region.

Vanderbilt has been a historical and significant partner of the Nashville Area Chamber and made numerous economic contributions to this area and the state with the jobs they have created directly and indirectly as well as help attract.

Vanderbilt is a centerpiece of economic vitality not just for this region but for the entire state. It's contribution to education, research and development, healthcare and entrepreneurship help foster a welcoming business environment and growth opportunities.

The partnerships that Vanderbilt has across the state benefit our communities, particularly as the medical center delivers quality healthcare to our most vulnerable populations. We operate in many of those areas and hear daily about the amazing things the hospital does for our customers. We feel strongly about the impact of the medical center, and as a result many of our employees volunteer at the Monroe Carell Jr. Children’s Hospital at Vanderbilt. Vanderbilt's contributions through its partnerships, curriculum, medical research and development help drive the vitality of our state's economy and quality of life by enhancing by health, literacy, education, and culture.

As an alumnus and lifelong supporter of Vanderbilt, my involvement throughout the years has provided an opportunity for me to see firsthand the breadth and value of the university and the medical center. Vanderbilt has so many facets, which makes it a gem not only locally, but regionally, nationally and even internationally. It’s contribution to the community and economy are vital to our state from education to healthcare discovery and treatment.

We experience Vanderbilt’s reach into Nashville every day at Conexión Américas. Vanderbilt provides organizations like ours with many of the talented staff, board members and interns necessary to achieve our mission, and the university partners with us on myriad projects that help us strengthen, describe and expand our impact in the community. Most important, the immigrant and refugee families we serve at Conexión Américas and Casa Azafrán benefit from the expertise of Vanderbilt professors, the dedication of Vanderbilt student volunteers and the many innovative ways that Vanderbilt’s presence in Nashville improves the quality of life for all Nashvillians.

The overall economic and societal impact of Vanderbilt University is truly staggering. The depth of their impact saturates not only middle Tennessee and Tennessee's rural communities, but indeed regions throughout the state. These areas of impact are diverse, ranging from healthcare to education and true workforce and economic development.

The Tennessee Chamber of Commerce and Industry is not only honored to have Vanderbilt as an investor in the State Chamber, but is also proud to call Vanderbilt a cohesive and influential stakeholder in our statewide economy. We look forward to continuing to partner with Vanderbilt to help keep Tennessee's quality of life high and economic future prosperous.

As the largest employer and largest university in Davidson County, Vanderbilt attracts thousands of bright minds from around the globe to work and to study in our city — many of whom stay and make Nashville their permanent home. Human capital will help determine which cities are most successful in the 21st century. Nashville is extremely fortunate to be the home of this world-class, powerhouse research university and medical institution.

As Nashville and the surrounding area grows, Vanderbilt University is at the forefront addressing the issues of traffic and other transportation issues. The university was the first to participate in the MTA and RTA commuter program, EasyRide, and soon other businesses and government entities followed. Vanderbilt also has teamed with the Tennessee Department of Transportation to investigate new and innovative ways to disseminate traffic information, as well as meet with local business and civic leaders as part of a public transit leadership academy. VU truly takes a leadership role in making the Greater Nashville area an attractive place to live and work.

Vanderbilt is a key driver in making Nashville the ‘It’ city. As by far our largest nonprofit organization, it leads a sector that contributes 15 percent of the employment in this market. More specifically, its intellectual capital and research depth are invaluable for our high-tech and health care industries. It is responsible for bringing to Nashville the best minds in virtually every field of the sciences and the humanities, and it contributes to a new generation of bright millennials who are moving to town and adding their energy and creativity to our economy and our society.

As a non-profit leader devoted to issues of education, business development, housing, health and quality of life, I am grateful for the investment Vanderbilt makes in our community as a major employer and economic driver. Vanderbilt is an important resource, providing thought leadership for Tennessee in critical areas, such as comprehensive education reform. On a daily basis, the University’s commitment to making a diverse set of investments serves to enrich our community and the lives of people in the greater Nashville community and beyond.


More news on Vanderbilt in Tennessee