Posted by Michelle Bukowski on Tuesday, September 28, 2021 in News.

VISE Fall Seminar
to be led by 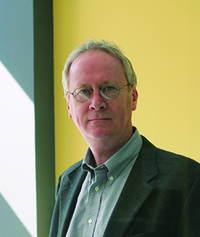 Title:  Functional MRI of White Matter
Abstract:  Blood oxygenation level dependent (BOLD) contrast in MR images has for 30 years been exploited for detecting localized neural activity in the cortex using functional MRI (fMRI), and is an essential tool for mapping brain function. In addition, correlations between fMRI signals in a resting state are interpreted as depicting functional connectivity between regions. While BOLD signals have been reliably detected in grey matter (GM) in a very large number of studies, such signals have rarely been reported from white matter (WM). However, although BOLD effects are weaker in WM, using appropriate detection and analysis methods they are robustly detectable both in response to stimuli and in a resting state. Moreover, resting state correlations between voxels in WM appear to be anisotropic but allow the construction of functional correlation tensors that quantify this correlational anisotropy. WM BOLD signals in specific tracts change in response to stimuli and are modulated by tasks in much the same way as GM. Resting state correlations between segmented WM tracts and parcellated GM volumes indicate new structure-function relationships in the brain, and changes in these appear to be biomarkers of pathologies such as neurodegeneration. This presentation will summarize some of our recent studies that provide evidence that BOLD signals in WM are related to brain functional activity and deserve greater attention by the neuroimaging community.

Speaker Bio:
John C. Gore, Ph.D., holds the Hertha Ramsey Cress Chair in Medicine and is a University Professor of Radiology and Radiological Sciences, Biomedical Engineering, Physics and Astronomy, and Molecular Physiology and Biophysics at Vanderbilt University, where he also directs the  Vanderbilt University Institute of Imaging Science. Dr. Gore obtained his B.Sc. in Physics from the University of Manchester in 1972, a Ph.D. in Physics from the University of London in 1976, and a BA degree in Law from Ealing College, London in 1982. He also has an honorary  degree from Yale University. He is a member of the National Academy of Engineering and an elected Fellow of the American Association for the Advancement of Science, the American Institute of Medical and Biological Engineering, the International Society for Magnetic Resonance in Medicine (ISMRM), the American Physical Society, the National Academy of Inventors, the International Academy of Medical and Biological Engineering, and the Institute of Physics (UK).  He is also a Distinguished Investigator of the Academy of Radiology Research and Overseas Fellow of the Royal Society of Medicine (UK). He served on the Council of the National Institute of Biomedical Imaging and Bioengineering from 2011-2015, was twice an elected trustee of the Society for Magnetic Resonance in Medicine and was a founding board member of the Society for Magnetic Resonance Imaging. He is editor-in-chief of the journal Magnetic Resonance Imaging. He has been honored with several awards including the Gold Medal of the ISMRM (2004) for his contributions to the field of magnetic resonance imaging, the Earl Sutherland Award for Achievement in Research from Vanderbilt University, and is an Honorary Professor at Zhejiang University in China. As a Principal Physicist in the Department of Medical Physics, Dr. Gore founded the pioneering MRI research program at the Royal Postgraduate Medical School and Hammersmith Hospital in the UK in the late 1970’s. In 1982 he established the MRI research program at Yale University which he directed from 1982-2002. At Yale he was also the founding Chair and Director of the program (later Department) of Biomedical Engineering and was a Professor of Diagnostic Radiology, Professor of Applied Physics and Professor of Psychology. In 2002 he moved to Vanderbilt University to establish the Vanderbilt University Institute of Imaging Science which has since grown to be one of the premier centers for imaging research in the world. Dr. Gore has published over 700 original papers and contributions within the medical imaging field. His research interests include the development and application of multimodal imaging methods for understanding tissue physiology and structure, molecular imaging and functional brain imaging.