Posted by bonorsw1 on Tuesday, February 25, 2020 in Uncategorized.

As part of its continuing commitment to understanding and combating climate change issues through education and action, Vanderbilt University is now an accredited, official observer of the United Nations Framework Convention on Climate Change. This designation allows students, faculty and staff to participate in negotiating conferences that bring together tens of thousands of lawmakers, scientists, activists and others to adopt international climate policy and discuss a diverse array of climate-related issues. These conferences—hotbeds of learning and discovery—are not open to the public.

Vanderbilt obtained the official U.N. accreditation after nearly two years of work that required the support of university leadership and nearly 700 pages of application materials documenting the university’s strong commitment to climate-related education and global engagement.
Vanderbilt earned the status in time for more than a dozen students to attend the 25th annual Conference of the Parties to the UNFCCC (COP25) in Madrid, Spain, in late December. The students were led by Leah Dundon as the culmination of a new interdisciplinary course on climate change titled “Climate Change and the Global Response: A Multidisciplinary Perspective.” Dundon is director of the Vanderbilt Climate Change Initiative, a lecturer in the Department of Earth and Environmental Sciences, and an environmental lawyer.

“At COP, access to the world’s leading thinkers on a range of subjects is unparalleled, and the COP is a perfect venue to attain that part of a global education that can only be had by experience,” Dundon said. “My students met personally with prior heads of state, lead climate negotiators from the U.S. State Department, industry leaders, leading economists, indigenous people, media, and many more.”
In addition, Dundon and one of her students, Kelson Reiss, presented original research during a panel discussion about the role of higher education in increasing ambition to meet the goals of the Paris Agreement. Below, Reiss and some of his classmates give their reaction to the COP25 experience. 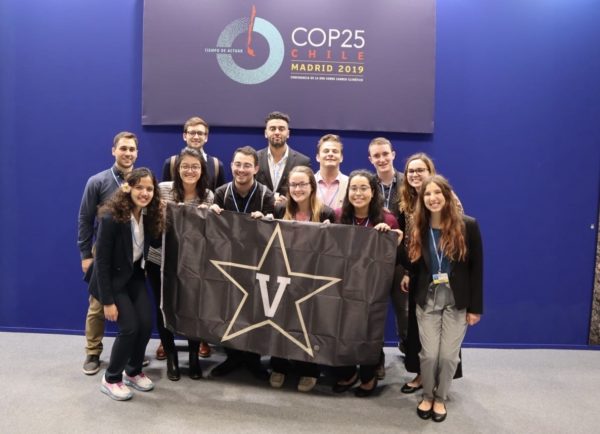 What’s your biggest takeaway from this experience?

My generation is vividly interested and engaged in climate change issues, but too many students graduate without having any academic exposure to the scientific, political and social issues tied to climate change. Especially after attending this conference, I realize that we need a young educated public to face the difficult decisions that lie ahead tied to the climate emergency, and that starts in the classroom. —Kelson Reiss, Philosophy and Computer Science, graduated in December 2019

One of my biggest takeaways (one that I was not expecting to have) is a feeling of hope that we might be able to tackle this issue after all. From the influential people I met, to the immense presence of young people, to the welcoming and sharing of distinct voices and cultures, to the respect the delegates had for each other in the negotiating room, I left with the sense that there are people and policymakers who are dedicated to confronting this issue. The lack of action in the U.S. makes for such widespread pessimism and apathy, so we often forget to look at all the other parts of the world that are making great strides to combat the climate crisis. Being exposed to so many different people and countries gave me a greater sense of hope.  —Gabrielle Guarna, Earth and Environmental Sciences and Cinema and Media Arts, Class of 2022

Climate change is an immovable reality in my life because I am a Cuban American from Miami who feels closer to his city than anywhere else in the world. I have a moral, civic and cultural obligation to preserve my city by dedicating my life to a career in climate legislation, litigation or adaptation-related research. While Professor Dundon’s class prepared me intellectually and academically to attend the UN COP25, what I took from the conference was a set of immense personal realizations. Some of these understandings will serve as a basis of hope for me, while some will undoubtedly continue to serve as flares of desperation that will, as an unkind necessity, keep me motivated to push forward and fight back. —Luis Martinez, History and Spanish and Portuguese, Class of 2022

The youth engagement at COP25 really surprised me. Climate change is a highly generational problem. In our class at Vanderbilt, we learned about Juliana v. United States, which is a climate justice case reaching the Supreme Court. A group of young plaintiffs are suing the United States federal government for prioritizing current adult citizens over future ones through climate ignorance. Younger people will feel the impacts of climate change disproportionately to current adults. It made me really proud to see youth from all around the world (not just Greta Thunberg) come together to hold adults accountable. The youth, however, were not really present in the actual negotiations. That should change in the future. —Jacob Wilentz, Economics, Law, History and Society, and Anthropology triple major, Class of 2021

Foreign policy is incredibly complex, more so than I understood, and the process itself at COP25 was a lot more formal and intricate than I expected. Also, I was surprised by the large variety of priorities among global stakeholders. Coming in, I had an overly naive view that nearly all parties were on the same page about climate change being an issue. To an extent that is true, but countries were also largely driven by self-interest. This caused conflict between, for example, an under-developed island nation that will sooner experience the immediate consequences of climate change vs. a wealthier country that is more insulated and therefore more reluctant to contribute resources. —Kelson Reiss

What’s something you learned that you didn’t know before attending the conference?

Something I heard consistently at the conference is that 2020 is the make-or-break year. If we don’t make real, concrete changes this year, the hope of staying below 2°C warming is a completely unattainable goal with very real consequences. This was something new for me because previously I had always been told that the turning point year was 2030 at the earliest. Hearing this made me fear even more for the future since I know it is very unlikely that 2020 will bring the drastic changes we need. —Gabrielle Guarna

I did not realize the personal impact of actually meeting people severely affected by climate change. It is one thing to read about climate refugees or watch videos on the internet, but I met 10 indigenous leaders from the Amazon who have lost their land because of deforestation, lost water because of severe drought, and even lost part of their culture because of their sacred connections to natural sites. I saw tears, frustration and anger. It reminded me how everyone on this planet is human and deserves compassion, respect and love. —Jacob Wilentz

I learned about NBS, or nature-based solutions, as a means of solvency that would incorporate coastal regimes and other natural structures inherent to different parts of the world in climate mitigation and resilience-increasing plans and policies. —Luis Martinez

Why should we take international institutions like COP25 seriously?

In some ways, these institutions are the gatekeepers to systemic change. We have a multitude of innovative community-informed solutions that can work toward environmental justice. If we don’t ensure these solutions are heard and implemented throughout international institutions, lasting sustainable change that works for everyone will be much more difficult to achieve and maintain. —Oliver Sandreuter, Public Policy, Spanish, Human and Organizational Development, Class of 2020

What do you wish more people knew about climate issues?

One person can make a huge difference. After COP25, I decided to become a vegetarian because meat contributes so much carbon dioxide to the atmosphere. At first, I was really nervous because I love meat and food so much. However, I powered through because we all have to make sacrifices. That one small change has decreased my carbon footprint by half. It motivates me every day to do better and remind my family, friends and community of the power of their actions. —Jacob Wilentz

Just because it might not be affecting you directly, doesn’t mean it isn’t an issue! The climate crisis is not something that is a future threat—the effects are happening to people all over the world, and mostly to populations that are already very vulnerable. —Gabrielle Guarna