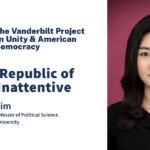 The Republic of the Inattentive (VIDEO)

Apr. 5, 2021—Despite conventional wisdom, behavioral evidence repeatedly suggests that most Americans are not avid consumers of political news. Instead, they are spending an astounding amount of time engaging with entertainment media. It is time to face the extent to which politics and non-political media consumption are closely intertwined. The role of ‘The Apprentice’ in the rise of President Trump is one such example. Going forward, politicians need to rewrite the standard political playbook to reach an inattentive public.