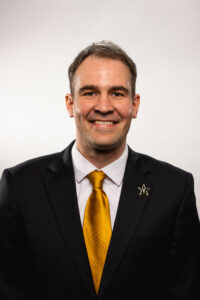 Nate Bell joined the Vanderbilt Student Services staff in August 2009 and currently serves as an Associate Director. In addition to working with student-athletes on a daily basis, he sits on the Vanderbilt Athletics Awards Committee, serves as liaison for the department with Vanderbilt graduate school programs, and oversees academic data collection and reporting for the unit.

Nate received his Bachelor of Arts degree in Psychology at Wabash College, earning a number of athletic and academic accolades as a 4-year member of the basketball team. He earned his Master of Science degree in Sport and Exercise Psychology/Sport Administration from Ball State University. Most recently, Nate received his Doctor of Education degree in Higher Education Leadership and Policy from Vanderbilt University’s Peabody College.

Nate is originally from Fort Wayne, IN and resides in Nashville, TN with his wife, Sunny, and two daughters, Charlotte and Isla. He enjoys playing golf, talking personal finance, and spending time with his family.

The Vision for Vandy United

Student Athletes of the Month