The Ben Schulman Center for Jewish Life on campus is a vibrant community that provides many opportunities for Jewish experience – spiritual, intellectual, social, communal. We are committed to the diversity of religious expression within Judaism, and we embrace and seek interfaith understanding among the many traditions represented at Vanderbilt. 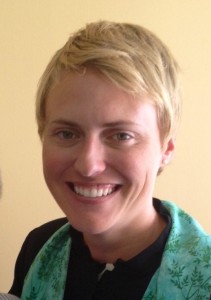 I was born in our nation’s capital and lived in various cities in Florida but primarily grew up around the lakes, where I fell in love with rowing. Don’t hold it against me, but I rowed at the University of Tennessee, in Knoxville. A couple years later, after living and working in Colorado, a few good road trips, and some overseas backpacking, I went to seminary at Duke, where I focused on pastoral care, social issues and reformed worship. I have had a decade of great ministry experiences, including working with youth and young adults, at academies and camps, in hospitals, and learning with people living with HIV/AIDs, as well as worshipping with some wonderful Presbyterian churches. Most recently I finished a year working as a chaplain at a brand new children’s hospital, which gave me the hours and space to finish a certification for chaplaincy and pastoral counseling, while doing some pastoral supply work in my home church and presbytery. I am new to Nashville and look forward to knowing the city more! Feel free to reach out to me at: campusminister@ukirknashville.org. Nancy is a creative and energetic pastor in the United Methodist Church and began working with Vandy Wesley in 2016. She also spends her time as the young adult pastor at West End UMC across the street from Alumni Lawn.  Nancy frequently breaks into song and laughter.  When she’s not pastorin’ you could find her taking voice classes at the Nashville Jazz Workshop, interviewing people for her podcast, or kayaking down the Harpeth.

Nancy has a Bachelors of Arts in music from Florida State University and a Masters of Divinity from Vanderbilt Divinity School.  She is married to Geoff who works to create young adult ministry resources at The Upper Room.

Join Vandy Wesley for free food and worship at the Divinity School Reading Room (next to Benton Chapel) on Tuesday nights from 6-7pm.  Also, the best way to get to know someone is over coffee or ice cream — so we should do that sometime — my treat! Rabbi Rothstein was raised in Baltimore, MD, the oldest of eight children. He traveled the world for school, living in Chicago, Montreal, Melbourne, and New York before landing in Tennessee.

The Chabad Jewish Student Center at Vanderbilt University is based on the ideology of Chabad and fueled by the inspiration and teachings of the Lubavitcher Rebbe, Rabbi Menachem M. Schneerson, which have at their foundation the encompassing mitzvah “to love every Jew as one loves himself” and the mandate to concretize that love with Acts of Kindness and Mitzvahs. It’s our belief that every individual Jew has an indispensable contribution to make to the totality of the Jewish people. Chabad welcomes all Jews at their own pace and comfort level through innovative educational programs in all areas of Jewish life. Richie is originally from Little Rock, Arkansas. He and Laura met in college and were married in 2000. He graduated from Belmont University and attended Reformed Theological Seminary in Jackson, MS. In 2004 he graduated from RTS with an Masters of Divinity. He ministered as the Associate Pastor of Covenant Presbyterian Church in Cleveland, MS from 2004-2007 before becoming the Assistant Pastor to Young Adults at Independent Presbyterian Church in Memphis, Tennessee. In 2009, Richie was called to be the Senior Pastor at IPC where he served until 2015. In 2015 Richie was called to RUF at Vanderbilt. Richie and Laura have three children, Mamie, Griffin, and Margaret.

Check out RUF’s page on https://www.facebook.com/group. St. Augustine’s Chapel on the Vanderbilt Campus is a vibrant and hard working community of people that consists of students, faculty, and staff as well as about 200 people from the greater Nashville Community. We provide opportunities for worship, fellowship, learning and outreach to anyone who is interested. Baptist Collegiate Ministry (BCM) exists to help students and the university community know God through Bible study, worship and discipleship and to make God known through fellowship, community ministry, outreach and missions. Come join us on Thursday nights at 8:15 at the BCM for our weekly worship/Bible study or just stop by the building. Our doors are always open to you. Grace and peace. Fr. Gervan Menezes, more commonly known as Fr. G, was ordained to the priesthood on July 26, 2014. Since then he has lived and served at the Cathedral of the Incarnation in Nashville, where he has functioned as Master of Ceremonies for both Bishop David R. Choby and Bishop J. Mark Spalding. In addition to his duties at the Cathedral, he ministered as Chaplain for the Diocese of Nashville’s Youth and Young Adult Office, and as Chaplain for Father Ryan High School. Before coming to University Catholic, Fr G was an associate pastor at St. Philip Catholic Church in Franklin, TN.

Starting July 1 Father Gervan was appointed by Bishop Spalding as the Chaplain for University Catholic. In addition he will serve as the parochial vicar for the Cathedral of the Incarnation and continue to be the Episcopal Master of Ceremonies for Bishop Spalding.
A native of Fortaleza, Ceará, Brazil, Fr. Gervan enjoys traveling and cooking. Before he became a priest he worked as an event planner, catering company, master of ceremonies and a manager for three Sushi bars in Brazil. His family has many people that work in the restaurant business, where he discovered the love for cooking and food in general.
Father Gervan loves being a priest! He is passionate about his vocation and has helped many people in their discernment process. While he was a Chaplain at Father Ryan High School, he established the Melchizedek Project, a discernment group for young men to explore and discover God’s call to their life. Father Gervan also had a Melchizedek Project group at St Philip and is ready to continue to run the same program at University Catholic.
Before coming to the Diocese of Nashville in 2010, Fr. G lived as a missionary in Brazil for three years and was part of a new community called Shalom. His story with the middle Tennessee area goes all the way back to his sophomore year at Cookeville High School. His American host family really became a family for him. This has helped in his decision to come to the Diocese of Nashville to become a seminarian.
Fr. G finished his studies for the priesthood at Assumption Seminary in San Antonio, Texas, receiving a Master’s in Divinity and Master of Arts in Theology from the Oblate School of Theology. He also has a Sacrae Theologiae Baccalaureus, S.T.B. from Saint Paul University, Ontario, Canada. Prior, his undergraduate studies were completed in Brazil at Universidade de Fortaleza (UNIFOR) and Instituto Teological Pastoral do Ceará (ITEP), where he received a Bachelor of Arts in Tourism and Philosophy.
Fr. Gervan was the Grand Knight at the Pope John Paul II Council 13523 at Assumption Seminary in San Antonio. He is the Associate State Chaplain for the Knights of Columbus for the Diocese of Nashville, and the Fourth Degree District Friar. Fr. Gervan serves as a Chaplain for Knights of Columbus Blessed Pier Giorgio Frassati Council 15020 and Saint Joseph the Carpenter Assembly 3489.