**Due to COVID-19 restrictions and guidelines, VUNROTC will not be hosting a Navy and Marine Corps Birthday ball this year. Look for our event to resume next fall.**

Historically, the Vanderbilt NROTC program hosts the local Navy Ball. The Navy Ball celebrates the Navy’s proud heritage as well as the Marine Corps’. The Navy Ball is a fun environment that allows the midshipmen of the unit the opportunity to attend  a “black tie” event not ordinarily observed by college students. The ball is open to all midshipmen, unit officers, families, and honorary guests. 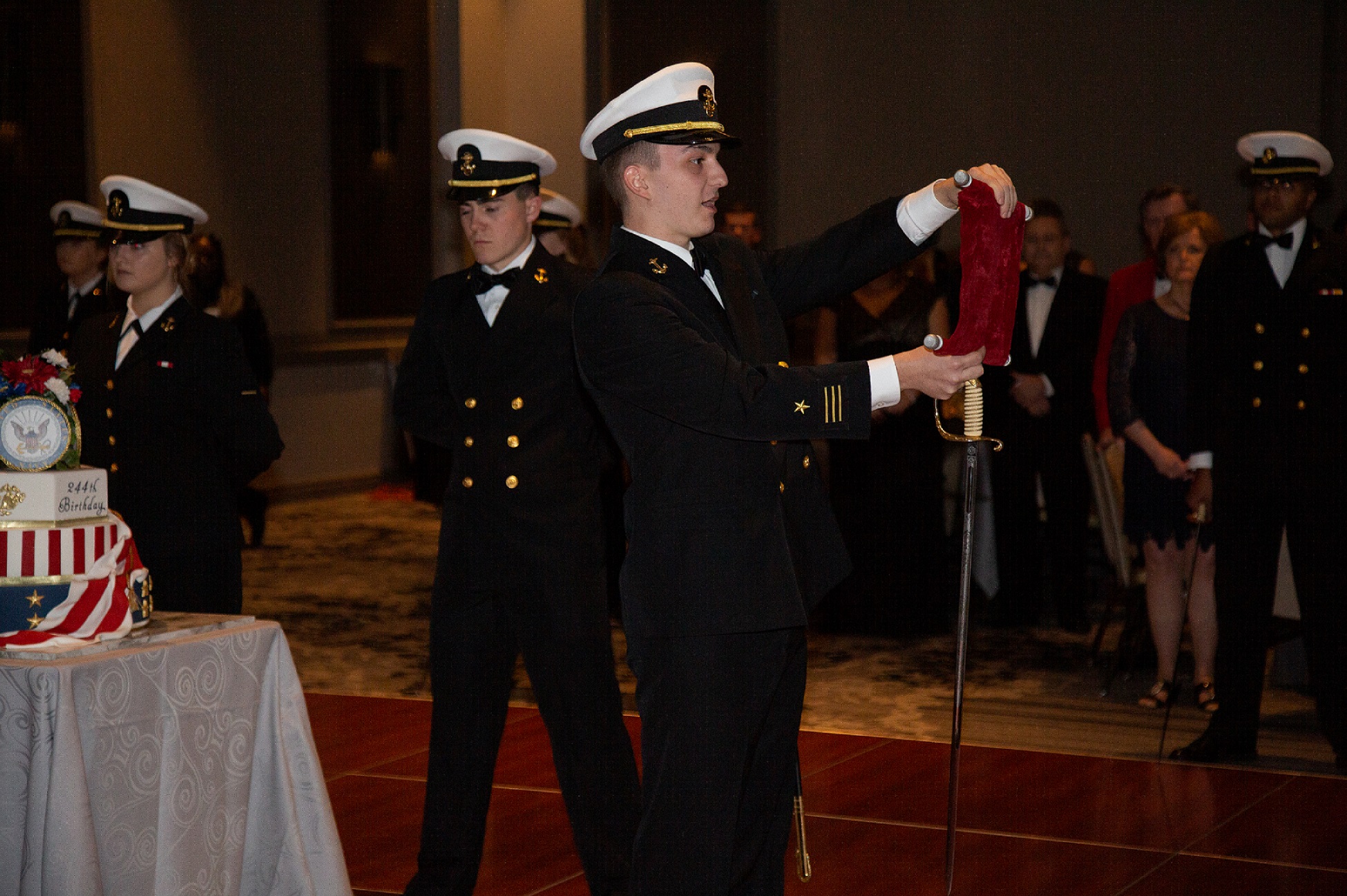 The NROTC’s unit is organized and planned by midshipman and only guided by the staff’s gunnery sergeant to carry out the entire night’s festivities. The start of the ball is composed of a coordinated presentation of the commanding officers of both the unit and battalion. As tradition dictates, a celebration of the past and present are celebrated by the symbolism of passing of the birthday cake. During this presentation, the oldest Naval member and youngest Naval member are presented with a piece of the honorary cake of the ball.  Immediately following, a declaration of the histories that govern both respective branches are addressed to the audience in military manner. In addition to the  histories presented, a short and informative video speech is viewed from both the Commandant of the Marines Corps and the Chief of Naval Operations. In both of these video presentations, a brief detail into the history and tradition that both branches hold are further elaborated. Concluding these presentations, a short speech is delivered by the honorary guest of the evening —for the past couple of balls we have been blessed with the presence of four admirals. At the closure of the address, all present are presented with the courses for the evening. After dinner is finished, all are welcome to join in on the dance floor and dance to a live ban

The Navy portion of the ball is to remind the present of  the rich history and tradition that the United States Navy has held since its formation. Originally the US Navy was not a welcomed aspect of the US government as it has become today. On October 13, 1775, during the infancy of the Revolutionary War (1775-1783), the Continental Congress passed a resolution of commissioning two sailing vessels into the service of the US government.

The passage of the formation of the US Navy did not come to fruition lightly; the aspect of a US Navy carrying a great amount of debate regarding both the placement of the US to the world and to equal representation of funds and defense between the Southern and Northern states. Delegates of the Continental Congress were afraid that due to Great Britain’s Naval dominance of the world, that an allocation of funds for a small Continental Navy would be wasted. Furthermore, many delegates were afraid that a naval retaliation from the US would only anger the British causing greater amounts of hostilities. In regards to representation, the naval concentration of shipping was centered in the north —specifically New England. With such a localization, the southern delegates of the Continental Congress felt that any funds going to the establishment of a Navy would be only spent in ensuring northern concerns.

Yet despite the controversy of establishing a Continental Navy, due to the constraints of time posed to the Continental Congress, the Navy was given an immediate priority. On October 5 of 1775, the Continental Congress received information that two unarmed and un-escorted British brigs were in route to Quebec from England. With such a chance of gaining much needed war goods, the Continental Congress formed a committee to come to a consensus pertaining to an action by the US. Incidentally, the committee was composed entirely of New England delegates —the bill was immediately ratified. With this passage, two naval ships under General George Washington were established as the first ships under the US. At the end of the Revolutionary War, the US Navy was responsible for the capture of more than 200 British vessels that were taken both near the states all the way to the British Isles.