Ever since I was permanently nicknamed Pancho by my Grandmother while living in Mexico, I've been on a life-long quest to decide what the name means to me. Over the past year my name has brought with it many curious looks from countless latinxs I've briefly met. This summer, those curious looks were almost always followed by "l,Francisco?". My name, whether I be known as Pancho or Francisco Emilio, 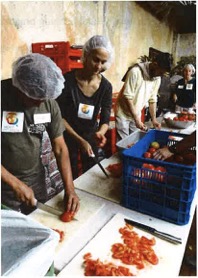 belies a cultural competency which, growing up white passing in College Station, Texas, I have been slow to claim or understand. Additionally, being a 6-foot man with green eyes and long hair, my appearance is at odds with the cultural image of Pancho, the dark skinned Mexican campesino, often identified by his startlingly bushy mustache. To deal with the questions of identity existing at the heart of my name, I simply try to earnestly follow and explore my convictions. This very unscientific process has also become the structure for my considerations of possible life paths.

I sought out Mani+ this summer because of their relationship with Vanderbilt, the excellent work they do, and the opportunity to learn in detail about how organizations are making a pronounced impact in Central America, a place I think about working someday in the future.

Mani+ is a social enterprise based in Guatemala City, Guatemala, that produces and develops food supplements that meets the nutritional needs of chronically malnourished children in Guatemala. With 47% of children in Guatemala suffering from chronic malnutrition, and the rate being significantly higher in rural areas, there is a pronounced need for effective ways to improve nutritional outcomes in rural Guatemala. By partnering with regional NGOs, Mani+ is able to improve nutritional outcomes, while working within networks that seek to marginalize rural communities, rather than simply reaching them.

In the second half of the 20th century, INCAP, the Institute of Nutrition of Central America and Panama, conveniently where Mani+ has their offices, ran a longitudinal study that found that improved nutritional outcomes created improved individual life outcomes, that also had a tangible difference on the economic outcomes of entire communities. By helping create better nutritional outcomes in Guatemala, Mani+ is able to improve livelihoods in Guatemala.

Over the course of the summer I had the opportunity to go on a few trips in Guatemala on behalf of Mani+. The top photo was taken of a food kitchen where the Mani+ team was volunteering soon after the volcanic eruption in early June. The second photo is of my trip to the 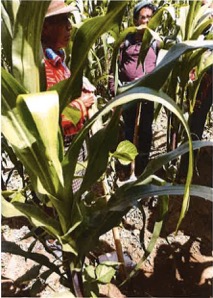 countryside, where I was taught local farming practices by a local farmer.

Mani+ places a premium on working with local communities. By conducting routine visits to the countryside, we are able t

o ensure that weare grounding best practices in local knowledge. Being able to take part in some of these visits was the most valuable part of my time in Guatemala.