On my first day at the American Civil Liberties Union of Tennessee, I was a bit nervous as I did not know what to expect. I was wearing some of the business-casual clothing that I had bought specifically for my summer project and was worried that I might be underdressed; I was quickly informed that there really was no dress code and I could wear a t-shirt and shorts. The staff at ACLU-TN was much more concerned with the ideas and energy that I brought into the team rather than my attire. My fears were quelled as soon '" as I met the staff for the day-long orientation. Everyone in the office seemed to be passionate about the same issues about which I care deeply. The mutual support and determination in that office room was contagious and proved to be a driving force for a fruitful and fulfilling summer project. Tennessee.

For the first week, I learned the ins and outs of being a communications intern for ACLU-TN. I learned how to search for and sort press clippings that mentioned the organization in their database. I became familiar with their outreach methods and learned specific ways to write press releases and social media posts. I went through county and metropolitan board meeting minutes parsing for any bill or resolutions that ACLU-TN would object to and provide a countervailing force through public mobilization and legal action. My understanding of how the organization acts as a government watchdog was greatly expanded through this first week, and it was one of the most important weeks in my summer project. 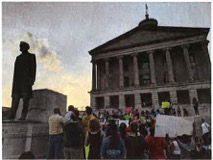 After that first week, I began to work on my first of three projects that I contributed to during my time at ACLU-TN. This project centered around updating their online resources page for the Criminal Justice page on their website. After much research, I updated statistics and curated important recent events to better reflect the current state of affairs regarding criminal injustices in Tennessee. The second project I completed was compiling an outreach list for ACLU-TN's 50th-anniversary dinner in which Mike Cody, a former ACLU-TN lawyer that represented Martin Luther King, Jr. in lifting the injunction against the Memphis Sanitation Workers' strike, was speaking. This involved searching for interested academics, public figures, student groups, social justice organizations, and clergy from the Middle Tennessee area. The third project I worked on was coordinating Know Your Rights workshops at the four HBCUs in Nashville for the fall of 2018. This project is still ongoing as the events have yet to take place, but I worked on developing the curriculum and communications for material for the workshops. I will continue to work with ACLU-TN throughout the fall in carrying out these events.

My time at ACLU-TN has been incredibly fulfilling and motivating. Throughout the summer, government infractions of civil liberties occurred frequently. If I had not had my position at ACLU-TN, I most likely would have read these events on my phone and might have adopted a pessimistic and passive perspective. However, being with that phenomenal group gave me the motivation to turn my frustration into action. I will never forget how the organization reacted to the passage of the travel ban and how the community united. I will always remember the sage advice of my coworkers after Justice Kennedy announced his retirement. In addition to the good that I believe came from this summer project in both tangible rewards and my own professional development, I truly believe that this summer project was formative for my own worldview.