Education as a Right, Not a Luxury

La Carpio is a 5,000 acre territory in the western end of the city of San Jose, Costa Rica inhabited by approximately 30,000 people. Originally afinca or farm owned by the government, the territory is bordered by the province's largest landfill to the West and by two of the 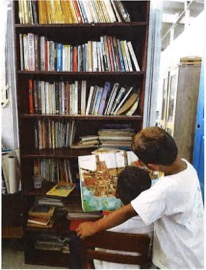 country's most polluted rivers to the North and South, leaving a single road leading East as the only exit.

The territory was initially settled in by refugees fleeing the Nicaraguan civil war in the early 1990s who built their homes out of scrap metal and rock. As the population grew in size and density throughout the years, certain basic services were made available, including limited sewage and electricity. However, the "illegal" occupation of the land and the undocumented status of many of its residents served to justify xenophobic governmental measures meant to prevent growth through structural and institutional neglect. Education, healthcare, and even law enforcement were inaccessible until recent years. Today, the single elementary school in La Carpio operates in shifts and can only offer three-hour school days to each child. There are no secondary schools, for which many teenagers are forced to drop out if they cannot afford to pay the bus fare to schools outside of the territory. The result is a community that is structurally and ideologically marginalized, discarded by the rest of the country as a dangerous slum and left extremely vulnerable to the many circumstances that define the cycle of poverty, beginning with educational isolation.

This summer, I worked with Fundaci6n Humanitaria Costarricense (FHCR), an important community center serving La Carpio for almost 20 years, in the development of two initiatives within the organization's educational programs. The first consisted on the addition of professional development and career exploration opportunities for FHCR's soccer team for at­ risk teenager boys. The second consisted on working with other volunteers to launch the Carpio Language Institute, a center for the promotion of literacy and language instruction through tutoring sessions and one-on-one lessons meant to fill in the gaps where the public education system has failed. The goal is that adults may eventually pursue their high school diplomas or formal employment through the attainment of literacy, and that youth can achieve English proficiency levels that provide competitiveness in the predominantly bilingual Costa Rican job market.

There are many obstacles to any community development initiative, and this summer it often seemed like these were amplified in the context of a community where education has become a luxury for many. One of the most valuable things I learned is the importance of relationships built on mutual goals and shared commitment to ensure the sustainability of any project. Although residents of La Carpio had expressed learning English as an urgent need, student recruitment and retention were ongoing challenges because, for many, it is more pressing to spend an hour performing an odd job to earn immediate money than investing time developing a skill that might not be used in the near future. Progress was therefore slow, but the programs gradually gained momentum as we began building friendships with students, who in turn started developing confidence in the quality of the lessons, believing in the progress being done, and recognizing the fruits of their discipline in learning. My hope is that commitment and investment in both government and NGO initiatives in La Carpio can help restore faith in education of quality as an attainable right for all children of the community and a stepping stone towards social inclusion.