Philippe Etienne, Ambassador of France to the United States 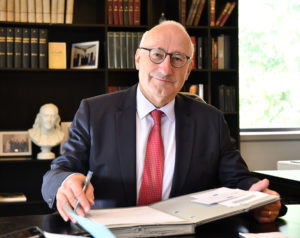 He is an expert on the European Union and continental Europe. He has held posts in Moscow, Belgrade, Bucharest, Bonn, Berlin and Brussels. He has also served as an adviser in the Cabinet of the Minister of Foreign Affairs on several occasions.

A graduate of the École Normale Supérieure and the Ecole Nationale d’Administration (“Voltaire” Class, 1980), Philippe Etienne also holds the Agrégation (teaching diploma) in Mathematics, has a degree in Economics and is a graduate of the National Institute for Oriental Languages and Civilizations (Serbo-Croatian). He speaks English, German, Spanish, Russian and Romanian.

He is an Officer of the Legion of Honor and a Commander of the National Order of Merit.