Last month, the Office of Federal Relations orchestrated a statewide letter from more than 65 Tennessee college and university leaders to the Tennessee congressional delegation urging them to make an affordable, high-quality college education more attainable for students by doubling the maximum Pell Grant award and permanently indexing the grant to inflation to ensure that its value will no longer diminish over time. For students of color and students with family incomes of less than $50,000, the Pell Grant is a critical program, and significantly increasing its size will help to drive economic recovery and mobility, address racial and economic inequities in college completion rates and increase overall educational attainment.

Led by Chancellor Daniel Diermeier, along with the leaders of the University of Tennessee, the Tennessee Independent Colleges and Universities Association and the Tennessee Board of Regents, the letter includes leaders of liberal arts colleges, HBCUs, regional public institutions and community colleges from across the state. “We have been proud to partner with our national associations and coalitions to strongly advocate for a doubling of the maximum Pell Grant award and are pleased to have so many leaders from across Tennessee join us in this effort,” said Christina West, associate vice chancellor for federal relations. “The Pell Grant program enjoys strong, bipartisan support from both the public and policymakers because it has been so successful in opening the doors of higher education to students while preserving their ability to attend the institution that best meets their needs. As we approach the 50th anniversary of the program this June, it is time for Congress to double the maximum Pell Grant.”

In addition to drafting the letter, the Office of Federal Relations organized a coordinated communications effort to highlight the letter, including a myVU article, social media efforts and publicity among our national associations and coalitions, including the #DoublePell coalition. It also gained media attention in the Knoxville News Sentinel , The Commercial Appeal and The Tennessee Tribune . The letter also will be used in congressional meetings organized by TICUA in February as well as other advocacy efforts in the coming months. 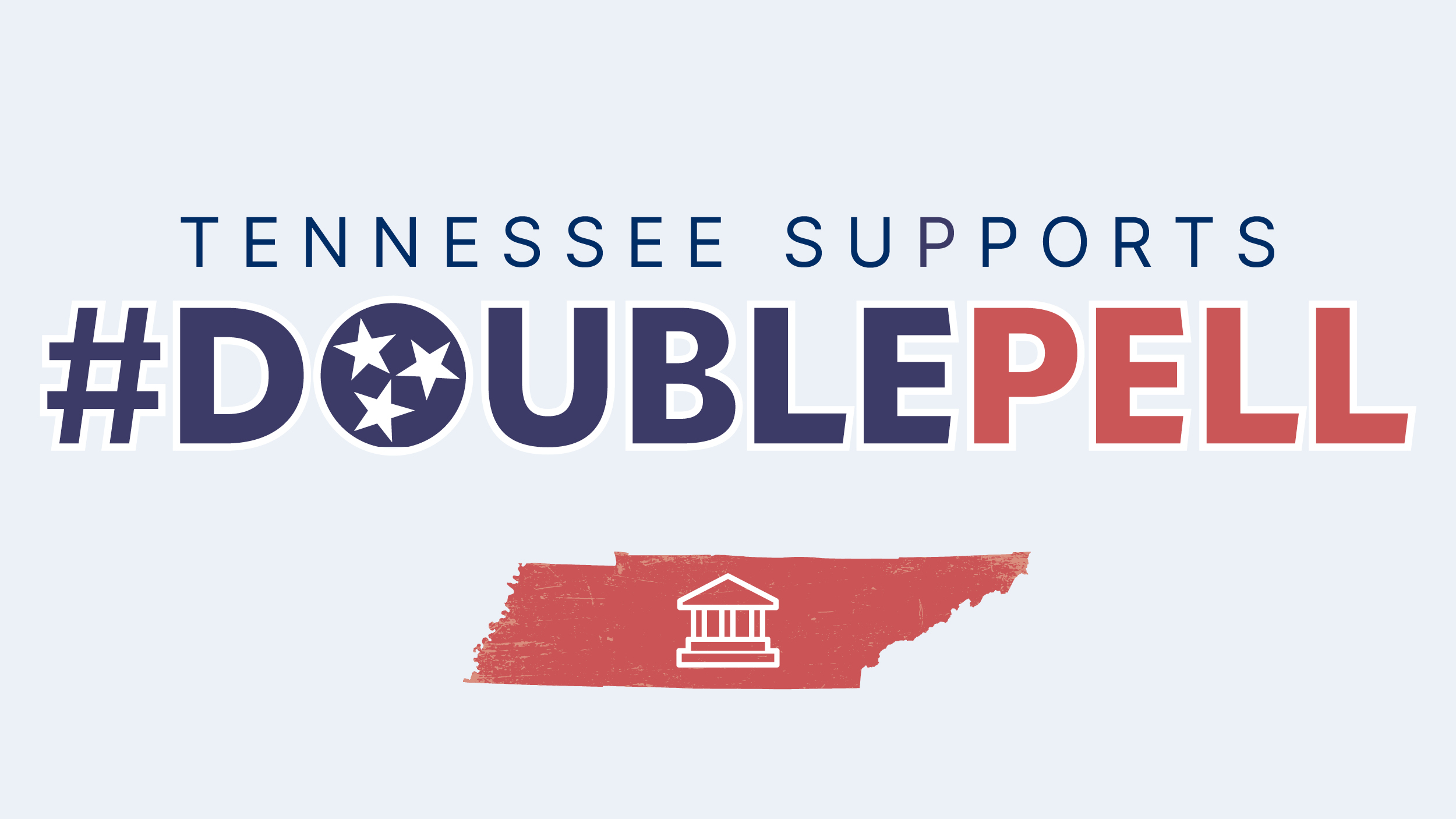 To date, Congress has yet to complete its work on the FY 2022 spending bills, and the government is currently operating on a stopgap spending measure that expires Feb. 18. The Office of Federal Relations has advocated consistently for robust FY 2022 funding levels for research, higher education programs and federal student aid programs, participating in numerous advocacy meetings with congressional staff and partnering with the many coalitions and associations to which Vanderbilt belongs to amplify that message. OFR has been in ongoing communication with the Tennessee congressional delegation, urging Congress to reach a bipartisan agreement to complete the FY 2022 appropriations process. OFR noted that long-term stopgap measures are not an efficient or fiscally responsible strategy to fund the government and that they result in agencies delaying research award decisions, which slows the pace of scientific innovation and creates uncertainty for researchers and students. OFR noted that both the House-passed and Senate draft bills include important proposed increases in research funding as well as higher education and student aid programs, including the House’s proposed $9.63 billion for the National Science Foundation and both chambers’ agreement that the maximum Pell Grant should increase by $400 to $6,895. Vanderbilt signed on to several letters led by coalitions in which OFR participates:

* The House has passed all 12 of their appropriations bills.

**Senate Democrats have introduced appropriations bills but they have not been considered in either committee or on the floor.

Adhering strictly to Vanderbilt’s COVID-19 protocols, the Office of Federal Relations began to welcome congressional staff back to campus this fall. Visitors included a key science and technology policy adviser to Sen. Marsha Blackburn (R-TN), whose visit was focused on NSF-funded research and featured NSF-funded efforts on inclusive engineering and building a neurodiverse workforce; cyber-physical systems and vehicle automation; the Wond’ry and I-Corps at Vanderbilt; and a closing meeting with Vice Provost for Research Padma Raghavan and Vice Chancellor for Government and Community Relations Nathan Green focusing on the importance of regional partnerships as Vanderbilt seeks to grow its innovation economy.

OFR also hosted district staff members on campus this fall (pictured below) from the offices of Sen. Marsha Blackburn (R-TN), Sen. Bill Hagerty (R-TN) and Rep. Jim Cooper (D-TN05). This visit focused on connecting the staff with key resources and services Vanderbilt provides that could assist them in meeting their constituents’ needs as they relate to people with disabilities. The theme of the visit was “Empowering Tennesseans with Disabilities Through Their Lifespan” to show the impact Vanderbilt has from early childhood at The Susan Gray School through entering the workforce with help from the Frist Center for Autism and Innovation. Congressional staffers also visited the Vanderbilt Kennedy Center, the Next Steps program, and Peabody’s IRIS Center. 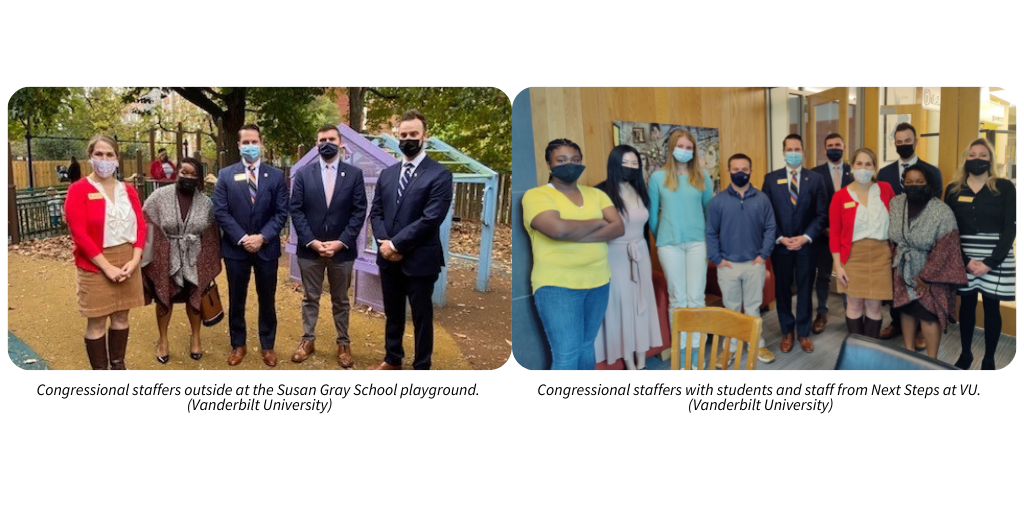 OFR welcomed Chancellor Daniel Diermeier to Capitol Hill in late October (pictured below) for in-person meetings with Sens. Marsha Blackburn (R-TN) and Bill Hagerty (R-TN) and Rep. Jim Cooper (D-TN05). Diermeier discussed with the Tennessee members of Congress how Vanderbilt continues to respond to the COVID-19 pandemic and his commitment to partnering with others across the state to move Tennessee’s innovation economy forward. Diermeier emphasized the important role federal support for basic research plays in economic growth and innovation and, in particular, the important role that leading research universities such as Vanderbilt play in Tennessee’s innovation ecosystem. 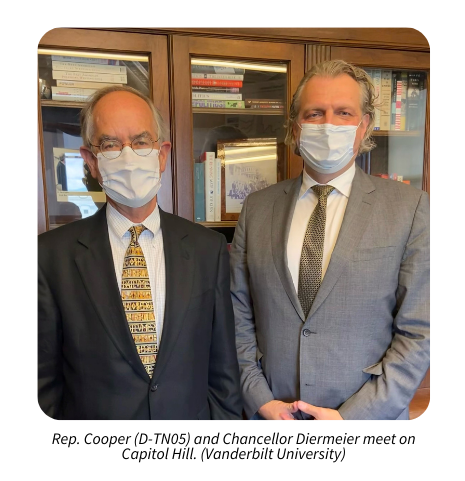 Outlook for the Build Back Better Act

Congress focused much of its energy this fall on the so-called “social infrastructure package,” dubbed the Build Back Better Act, which attempts to include a vast array of social policy proposals addressing early childhood education, health care, elder care, prescription drug costs and climate change provisions. Congress has been considering this package through a process called budget reconciliation, which permits it to pass the Senate with only 50 votes but severely constrains what can be included. From introduction to passage, intra-party negotiations shrank the package from $3.5 trillion to $1.75 trillion; it ultimately passed the House in November. With respect to VU priorities, the House-passed measure includes a modest $500 increase to the maximum Pell Grant; funds for DOE Office of Science, NSF and regional innovation initiatives; and a path to legal residency for 8 million immigrants, including Dreamers. The bill does not include a modification to the endowment tax that was included in earlier versions and which continues to be a high priority for OFR. Senate Democrats spent the rest of 2021 attempting to reach a consensus on the spending levels and to convince the Senate parliamentarian to allow the immigration provisions to be included. OFR continues to work behind the scenes with a small group of peers to reinstate the modification to the endowment tax during Senate floor consideration. As of now, however, work on this package remains stalled and its future is extremely murky.

Both VU and VUMC are members of United for Medical Research, an advocacy coalition of research institutions, scientific and patient groups and industry leaders who advocate for robust NIH funding. The Office of Federal Realtions’s active participation in UMR is a key part of our NIH advocacy efforts. As detailed in the 2021 year in review, UMR activities in 2021 included letters and statements to Capitol Hill; recognizing and growing champions; and providing a variety of reports and resources, data, economic impact, fact sheets and podcasts that speak to the importance of NIH research. Of note: 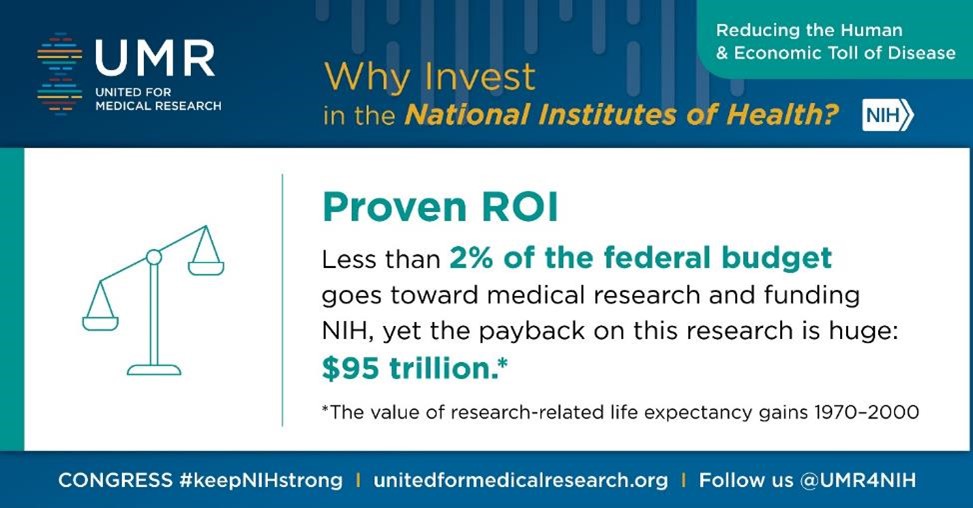 Other Updates in Issue 9