The DeSantis DREAM Lab represented the Evolutionary Studies Initiative this past Saturday at the Nashville Earth Day celebration at Centennial Park. The booth was a smashing success by all accounts. Associate professor of Biological Sciences and Earth and Environmental Sciences, Larisa DeSantis and her lab, discussed the evolution of humans, helped children learn to excavate fossils, and talked about the diets of extinct mammals. 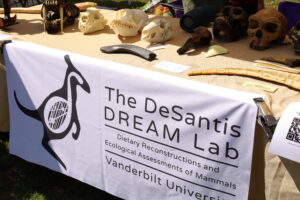 Adults learned about the diversity of human ancestors and found out that cougars – while large, terrestrial predators by today’s standards, pale in comparison to some of the big cats that once roamed the Earth. Of course, the sabretooth tiger came up, famous around Nashville for being the mascot of the Predators, the local National Hockey League team. For visitors that did not already know, DeSantis recounted the story of the fossil remains being found during the 1970s construction of the First American National Bank building in downtown Nashville. 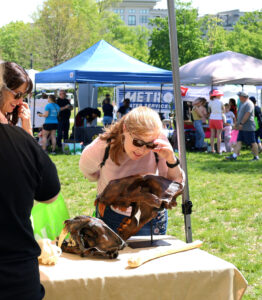 DeSantis even went one step further. The sabretooth tiger seemed small in comparison to the American lion. The American lion would have been roughly 1.5x heavier than today’s African lions.

Undergraduate students in the lab really made the event shine. The idea for the event was sparked in a conversation between senior undergraduate student in the Cognitive Science and Child Development programs, Chamberlyn Barnett and DeSantis. Barnett spent the day teaching young visitors about excavating fossils by helping them excavate cookies.

Each child was given a cookie on a plate. The cookies contained candy coated chocolates that served as the fossils for this exercise. The “future paleontologists” – as Barnett referred to them – would then be given a toothpick and would have to excavate the candy from the cookies. Some did so with impressive results. Some were quick to give up and just eat the metaphorical fossils – though. After excavating for candy, the children could then join Sola Johnson, a sophomore in the chemical biology program, and use coloring pages to learn about differences between extinct species and extant species. They also learned about endangered species.

Others involved in the event were undergraduate students, sophomore Chuyuan Xu in the Ecology, Evolution, and Organismal Biology and Communication of Science and Technology programs along with junior Hannah Kirkham of the biomedical engineering program.