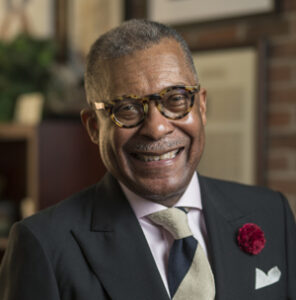 In 1986, while at Emory, he was also named Most Outstanding House Officer, made an honorary

While at Emory in 1987, Dr. Churchwell, along with Drs. Ajit Yoganathan, Robert Nerem, Donald Giddens, Robert Guyton, and Charles Hatcher, formed the core nucleus team from both Emory and Georgia Tech that led to the creation of the Emory-Georgia Tech Bioengineering Center. The result of these early efforts has led to many graduate and pool doctoral students of minority status in the field of biomedical engineering.

Churchwell received the J. Willis Hurst Award for Best Clinical Teacher in 1991 from Emory and in 2004 he was named the Emory University School of Medicine Resident Alumni Distinguished Achievement Award winner. For the past ten years he has been named one of the nation’s top cardiologists in “The Best Doctors in America.”

In 2005, he was named Walter R. Murray Jr. Distinguished Alumnus by the Association of Vanderbilt Black Alumni. The award recognizes lifetime achievements in personal, professional and community arenas.

In 2007, he was named the Associate Dean for Diversity in Graduate Medical Education (GME) and Faculty Affairs. Working with Dean Jeff Balser, Dr. Churchwell created a diversity plan that led to a rise in the percentage of underrepresented in medicine (URM) GME applicant pool from 9.5% in 2009 to 14% in 2017. With the diverse enrichment of the GME applicant pool, VUMC has experienced an increased % URM in its GME programs from 6.6% in 2008 to 11% in 2017. The actual impact of the success of our pipeline program is even more evident if you examine the salutary effect in the PGY1 or internship year–where in 2003 our % URM was only 7% and now, in 2019, it is 17%.

In 2010, he was awarded The Distinguished Alumnus Award of Vanderbilt University School of Engineering; and in 2011, along with his physician brothers Kevin and Keith, he received the nationally recognized Trumpet Award for Medicine.

He serves on many medical school committees including the Admission and Promotion Committees. In 2011, he was named Dean of Diversity for Undergraduate Medical Education to add to his current role in the Dean’s office. Dr. Churchwell and his team, building on the work of prior Associate Deans for Diversity has maintained that 20-25% of the entering Vanderbilt University Medical School class is of an underrepresented in medicine (URM) background. This effort has allowed us to sustain a diverse and rich learning environment where each student benefits from the experiences of students different from them by race, ethnicity, socioeconomic status, geographic site of origin, etc.

In 2012 and 2013, The Vanderbilt University Organization of Black Graduate and Professional Students (OBGAPS) honored Dr. Churchwell with one of the organization’s first Distinguished Faculty Awards. He was also recognized with an American Registry Most Compassionate Doctor Award. From 2010-2013, he has been awarded the Professional Research Consultants’ Five-Star Excellence Award—Top 10% Nationally for “Excellent” Responses for Medical Specialty Services and Overall Quality. And in 2014, he was honored as one of the Top 15 Most Influential African American Medical Educators by Black Health Magazine.

Furthermore, he was elected in 2012 to serve as the southern representative for the Group on Diversity and Inclusion (GDI) for the AAMC (American Association of Medical Colleges). As a member of the GDI, he was involved in creating a best practice manual for all diversity deans in medical schools to use as they build their programs. Since 2011, he has served on the Editorial Board of the Cardiovascular Engineering and Technology: A Journal of the Biomedical Engineering Society. In 2013, he helped create The Hurst-Logue-Wenger Cardiovascular Fellows Society (HLWCFS) of Emory University School of Medicine and was elected the first President of HLWCFS.  And recently, in 2014, he was named one of the “Top 15 Most Influential African-American Health Educators” by Black Health Magazine.

From 2013 to 2015, he served on the Biomedical Engineering Society (BME) Diversity Committee. He offered and utilized his near thirty year of experience in diversity and his academic connection to biomedical engineering research and education (MIDP Program and VUSE-BME Senior Design Class), to assist the committee in its efforts in diversity and inclusion. It was a satisfying and rewarding experience as he was able to meet like-minded experts with a commitment to work force diversity and the importance of a diverse class for broad and unique learning opportunities. In addition, he has served as an alumnus consultant for the Chair of Biomedical Engineering at VUSE for over five years. He also serves on the VUSE-BME Advisory Board that offers opinions, ideas, and recommendations to the BME Chair. He has served as a mentor for many minority BME undergraduates–offering them information on career path, specific research opportunities; and a host of other recommendations.

In 2015, he was appointed to the Board of Trustees for Cumberland University in Lebanon, Tennessee, where he serves as the Governance Committee Director and offering best practices on leadership and board diversity practices. In 2016, he was named to the American Institute for Medical and Biological Engineering (AIMBE) for his work in biomedical engineering education. And in 2017, he received the Vanderbilt University Pioneer in Diversity Award.

In summary, the previous paragraphs document a career of over thirty years, dedicated to furthering diversity in all realms of the academy, from undergraduates, graduates, and professional schools. His efforts began as a member of the medical school faculty at Emory University School of Medicine serving as the initial Minority Affairs Director and a founding member of the Emory-Georgia Tech Bioengineering Center. These efforts have continued at Vanderbilt and working both in the School of Medicine and partnering with the Biomedical Engineering Department’s leadership

Churchwell lives in Brentwood, Tennessee, and is married to Doreatha Henderson Churchwell, a nurse educator at Vanderbilt University Medical Center. They have two children, Crystal A. Churchwell and André L. Churchwell, Jr.