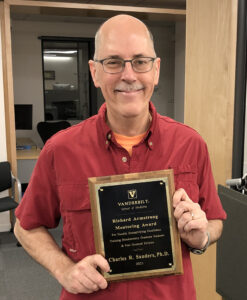 Congratulations to Chuck Sanders, professor of Biochemistry and Medicine, on receiving the 2021 Richard Armstrong Mentoring Award from the Department of Biochemistry! Chuck was selected for his outstanding and tireless dedication to mentoring approximately 20 undergraduate students, 12 graduate students and 29 current and former postdoctoral trainees, as well as his leadership and contributions to the Department’s PhD program.

Chuck was first appointed as a faculty member at Case Western University in the Department of Physiology and Biophysics in 1991. In 1998, he shared a bus ride with former CSB Director Walter Chazin from Narita airport to Tokyo Metropolitan University, as they traveled to the XVIII ICMRBS conference. Despite the fatigue caused by the overseas flight and the time difference, they chatted the whole time! Three years later, Walter and then Biochemistry Department Chair Michael Waterman successfully recruited Chuck to Vanderbilt University! Chuck joined the faculty of the Department of Biochemistry and the Center for Structural Biology in 2002, and the rest – as they say – is history!

Chuck presents A Retrospective on 30 Years of the Sanders Lab: How I Learned to Tell the Difference Between a Reticulated Vase and the Endoplasmic Reticulum as part of the Frontiers in Biochemistry seminar series on Friday, October 1. The award ceremony and presentation will follow the format of those for the previous awardees, Neil Osheroff (2018), Fred Guengerich (2019) and Walter Chazin (2020).