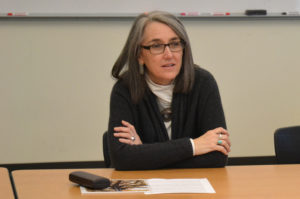 Kate Daniels received her MFA from Columbia University’s School of the Arts. She is the Edwin Mims Professor of English and author of six collections of poetry: The White Wave, The Niobe Poems, Four Testimonies, A Walk in Victoria’s Secret, Three Syllables Describing Addiction, In the Months of My Son’s Recovery, and Slow Fuse of the Possible: On Poetry and Psychoanalysis (2021 forthcoming). The White Wave received the Agnes Lynch Starrett Prize for Poetry. Among her honors are the Bunting Fellowship at Harvard (now known as the Radcliffe Institute for Advanced Study); the Guggenheim Fellowship in Poetry; three Best American Poetry selections; the Pushcart Prize; and election to the Fellowship of Southern Writers. Her poems have been anthologized in more than seventy-five volumes, and have appeared individually in journals such as American Poetry Review, Critical Quarterly, the Oxford American, Ploughshares, and the Southern Review. She edited Out of Silence: Selected Poems of Muriel Rukeyser, and co-edited Of Solitude and Silence: Writings on Robert Bly. She has a particular interest in the intersection of creative writing and the health humanities, and is an affiliate of the University of Virginia’s Center for Biomedical Ethics and the Humanities, and on the writing faculty of the Baltimore Washington Center for Psychoanalysis’ New Directions program. She teaches in Vanderbilt’s Medicine, Health, and Society program, and conducts community workshops on Writing for Recovery for people whose lives have been affected by addiction. You can find her at http://katedanielspoetryandprose.com/.

Tony Earley has written five books: two novels, Jim the Boy and The Blue Star, two short story collections, Mr. Tall and Here We Are in Paradise, and a collection of personal essays, Somehow Form a Family.  His work has appeared in The New Yorker, Harper’s, Esquire and The Oxford American, and has been anthologized in The Best American Short Stories and New Stories from the South.  Named by Granta as one of the twenty best young American novelists in 1997, and by the The New Yorker as one of twenty writers to watch in the twenty-first century in 1999, Earley has won a National Magazine Award, a Pushcart Prize, and the PEN Syndicated Fiction Award.  He is a member of the Fellowship of Southern Writers.

Rick Hilles is the author of Brother Salvage (winner of the 2005 Agnes Lynch Starrett Prize, and named 2006 Poetry Book of the Year by ForeWord Magazine) and A Map of the Lost World (February 2012), listed as a “Top Pick” on Library Journal’s website; both with the University of Pittsburgh Press. Among his honors are a Whiting Writers’ Award, the Amy Lowell Poetry Traveling Scholarship, and fellowships from the Camargo Foundation (Cassis, France), the Stegner Program at Stanford, the Institute for Creative Writing at U.W.-Madison, and the Fulbright Program. His poems, translations, and essays have appeared in Boston Review, Field, Harper’s, Literary Imagination, Michigan Quarterly Review, Paris Review, Poetry, The Nation, The New Republic, and Salmagundi. He is currently working on two poetry manuscripts: a book-length poem called, The Invisible Thread, substantial portions of which have appeared in Hudson Review, Literary Imagination, and Missouri Review; and The Empathy Machine, individual poems from this collection have appeared in American Literary Review, Connotations Press: an Online Artifact, Five Points, Kenyon Review, Ploughshares, and have accompanied performances by the Nashville Sinfonietta, conducted by Dean Whiteside. He is an Associate Professor of English at Vanderbilt University, where he teaches all levels of poetry courses, including in the MFA Program in Creative Writing. 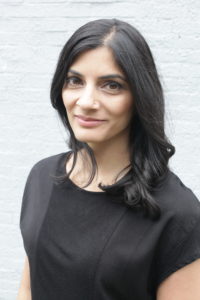 Sheba Karim is the author of three novels: Skunk Girl, That Thing We Call a Heart, and Mariam Sharma Hits the Road. Her upcoming novel, The Marvelous Mirza Girls, is out May 2021 from HarperCollins. Mariam Sharma Hits the Road was a Best Book of 2018 by NPR and a Bank Street Best Book of the Year. That Thing We Call a Heart was named a Best Contemporary Teen Read of 2017 by Kirkus Reviews, an Amelia Bloomer Best Feminist Book for Young Readers by the American Library Association and a Bank Street Best Book of the Year. Her writing has been featured in 580 Split, Asia Literary Review, India Today, Literary Hub, Off Assignment, Shenandoah, South Asian Review, The Rumpus, Time Out Delhi and in several anthologies in the United States and India. She is the editor of the anthology Alchemy: The Tranquebar Book of Erotic Short Stories 2. She has been awarded residencies and fellowships from Hedgebrook, Ledig House, Kimmel Harding Nelson Center for the Arts, The Millay Colony for the Arts and the Fulbright-Nehru Scholar Program. She received her MFA from the Iowa Writers’ Workshop. 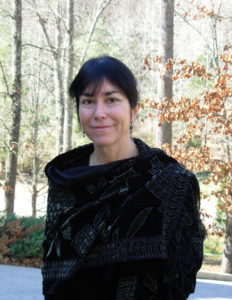 Lorraine M. López is the Gertrude Conaway Professor of English. She is the author of seven books of fiction and editor or coeditor of three essay collections. Her first book, Soy la Avon Lady and Other Stories won the inaugural Miguel Marmól Prize for Fiction. Her second book, Call Me Henri was awarded the Paterson Prize for Young Adult Literature, and her novel, The Gifted Gabaldón Sisters was a Las Comadres Selection. López’s short story collection, Homicide Survivors Picnic and Other Stories was a Finalist for the PEN/Faulkner Prize in Fiction in 2010 and winner of the Texas League of Writers Award for Outstanding Book of Fiction. An Angle of Vision: Women Writers on Their Poor or Working-Class Roots (2009) is her first edited collection. Subsequent publications include two novels, The Realm of Hungry Spirits (2011) and The Darling (2015) and two coedited collections, The Other Latin@: Writing against a Singular Identity (2011), with Blas Falconer and Rituals of Movement in the Writings of Judith Ortiz Cofer (2012), with Margaret Crumpton Winter. An associate editor for The Afro-Hispanic Review, López is the co-founder, with Professor William Luis, and Associate Director of the Latino and Latina Studies (LATS) Program at Vanderbilt University.  Her most recent book is a linked-story collection titled Postcards from the Gerund State, released in 2019 from BkMk Press. 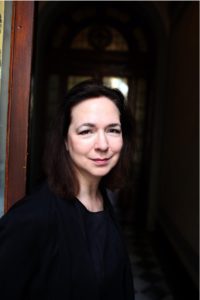 Lorrie Moore is the author of the short story collections Self- Help, Like Life, Birds of America, and Bark; three novels, Anagrams, Who Will Run the Frog Hospital?, and A Gate at the Stairs; and a children’s novel, The Forgotten Helper. She has won the O. Henry Award, The Irish Times International Fiction Prize, the Rea Award for the Short Story, the PEN/Malamud Award for Short Fiction, and the Finn Zinklar Award for the Short Story given by the Karen Blixen Society in Copenhagen.  She has been a finalist for the Orange Prize, The PEN Faulkner Award, The National Book Critics’ Circle Award, The Story Prize, and the Frank O’Connor International Short Story Award.  Her reviews and essays have appeared in such publications as The New York Review of Books, The New Yorker, The Yale Review, and The Atlantic, and a collection of her non-fiction was published in 2018.  Her collected short fiction was also published in the Everyman’s Library series in 2020 with an introduction by Lauren Groff.  A recipient of an NEA, a Guggenheim Fellowship, a Lannan Fellowship, and a Pushcart Prize, she was elected to the American Academy of Arts and Sciences in 2001 and to the American Academy of Arts and Letters in 2006, where she is currently a member of the Board of Directors.  Her work has been published in over a dozen languages.

Justin Quarry’s work has appeared in a number of publications, including The Guardian, The New York Daily News, The Chronicle of Higher Education, Salon, The Southern Review, New England Review, and The Normal School, which awarded him its Normal Prize in Fiction. He also has received the Robert Olen Butler Short Fiction Prize, a grant from the Elizabeth George Foundation, and Individual Artist Fellowships from both the Tennessee Arts Commission and the Arkansas Arts Council, among other honors. He is Program Coordinator of Undergraduate Creative Writing at Vanderbilt. For more information on Quarry, visit www.justinquarry.com.

Nancy Reisman is the author of the novels Trompe L’Oeil and The First Desire, a NY Times notable book and winner of the Goldberg prize from the Foundation for Jewish Culture, and the story collection House Fires, an Iowa Short Fiction Award winner. Her stories have appeared in many journals and anthologies, among them Tin House, SubTropics, Narrative, Yale Review, Glimmer Train, Five Points, Best American Short Stories, O’Henry Award Stories, and Jewish in America. She has received fellowships and awards from the Tennessee Commission for the Arts, the National Endowment for the Arts, MacDowell, the Fine Arts Work Center, the Wisconsin Institute for Creative Writing, and the Bogliasco Foundation.

Sandy Solomon‘s collection of poetry, Pears, Lake, Sun, won the Agnes Lynch Starrett award.  Her poems have appeared in such journals as The New Yorker, The New Republic, The Threepenny Review, The Gettysburg Review, The Times Literary Supplement, and Partisan Review. Garrison Keillor has featured a poem on his radio program, The Writer’s Almanac, and several poems have been included in anthologies, including Women’s Work:  Modern Women Poets Writing in English and Orpheus and Company:  Contemporary Poems on Greek Mythology. Among her honors are fellowships from what is now known as the Radcliffe Institute for Advanced Study and from Bread Loaf.