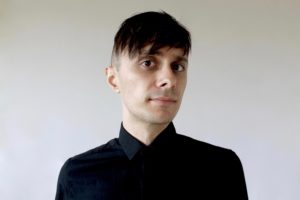 Hybrid Creatures, a new story collection by Matthew Baker, MFA ’12, came out on February 19 from LSU Press. Less than a week later, Baker signed a lucrative deal with Netflix and director Matt Reeves to produce his short story “Life Sentence” as a film.

Matthew Baker is author of the story collection Hybrid Creatures and the children’s novel If You Find This, and his stories have appeared in publications such as American Short Fiction, New England Review, One Story, Electric Literature, and Conjunctions, and in anthologies including Best of the Net and Best Small Fictions. A recipient of grants and fellowships from the Fulbright Commission, the MacDowell Colony, the Ucross Foundation, the Ragdale Foundation, Vermont Studio Center, Virginia Center for the Creative Arts, Blue Mountain Center, Prairie Center of the Arts, Djerassi Resident Artists Program, the Sewanee Writers’ Conference, and the Bread Loaf Writers’ Conference, he has an MFA from Vanderbilt University, where he was the founding editor of Nashville Review. His other projects include Early Work. Born in Michigan, he currently lives in New York City, where he teaches at New York University.