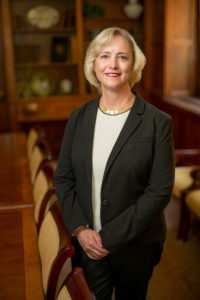 Susan R. Wente has been Vanderbilt’s interim chancellor since August 2019. Her appointment follows many years of distinguished service to the university, where she started in 2002 as professor and chair of the Department of Cell and Developmental Biology in the School of Medicine. During her time at Vanderbilt, she has served in multiple key roles in research, administration and leadership.

Wente also maintains her position as the university’s provost and vice chancellor for academic affairs, through which she oversees all academic programs and leads initiatives to advance the university’s mission.

Since Wente became provost in 2014, Vanderbilt has ascended in the U.S. News & World Report rankings from #16 to #14 and has jumped from #20 to #10 within Reuter’s assessment of the World’s Most Innovative Universities. Drawing on her distinguished background in biomedical science, Wente combines her expertise in scholarship and research with an overarching vision that spotlights innovation, collaboration and discovery. As Vanderbilt’s first female provost and the first woman to lead the university in an interim capacity or otherwise, she is an advocate for women in science and the importance of equity and inclusion across all academic affairs.

As interim chancellor, Wente oversees all facets of the university—working to elevate Vanderbilt’s mission and uphold its values of discovery, inclusion, immersion and achievability. As provost, she also oversees faculty, staff, programming and initiatives for all 10 of Vanderbilt’s schools and colleges: the Blair School of Music, the College of Arts and Sciences, the Divinity School, the School of Engineering, the Graduate School, the Law School, Owen Graduate School of Management, Peabody College of education and human development, the School of Medicine – Basic Sciences, and the School of Nursing. In addition, she leads the areas of student affairs, housing, admissions and financial aid, fostering a dynamic student experience. Under Wente’s leadership, Vanderbilt was ranked No. 1 for financial aid and No. 2 for happiest students by the Princeton Review in 2018.

Prior to becoming provost, Wente was named associate vice chancellor for research in the medical center in 2009 and was concurrently the senior associate dean for biomedical sciences, where she led several trans-institutional graduate programs and oversaw the training of over 1,000 graduate students and postdoctoral fellows.

Wente continues to run an internationally respected research program that has made groundbreaking discoveries regarding the exchange of proteins and RNA, which have enabled opportunities for further characterization of the biological mechanics behind cellular transport. She has personally mentored 36 predoctoral and postdoctoral trainees.

Throughout her career, she has received many honors and awards, including the coveted MERIT award from the National Institutes of Health (2010 – 2020), the Women in Cell Biology Senior Career Award from the ASCB (2011), the John H. Exton Award for Research Leading to Innovative Biological Concepts (2008), the Kirsch Foundation Investigator Award (2001 – 2003), and the Beckman Young Investigator Award (1996). Additionally, she is an elected fellow of the American Association for the Advancement of Science and has been featured in Nashville Medical News’ “Women to Watch.”