In both its history and recent renovation, Alumni Hall stands as testament to Vanderbilt's strong tradition of honoring the past while looking to the future.

The story of this iconic Vanderbilt building began in March 1919, just a few months after the end of World War I, when the Vanderbilt Alumni Association board proposed a new building to memorialize the Vanderbilt alumni, former students, and faculty who lost their lives in that devastating war and to provide much-needed social space for current students, whose numbers were beginning to swell.

Renowned Nashville architect Henry C. Hibbs went to work designing the new building in Collegiate Gothic style, an architectural style popular for university buildings in the early twentieth century, characterized by features such as arches, buttresses, crenellations, dormers, finials, parapets, and tracery, lending a touch of medieval gravitas to modern educational endeavors. Based on the ultimate success of Alumni Hall, Hibbs would return to Vanderbilt to design a series of signature buildings on the campus, including Neely Auditorium, Buttrick, Calhoun, Garland, and the central library building.

Alumni Hall, Vanderbilt's first Collegiate Gothic building, opened in 1925 as the university's first student center and was the hub of student activity for nearly fifty years. Generations of Vanderbilt students played pool in the basement, conducted club meetings in the parlors, and held tea dances in the Memorial Room on the second floor, where the names of the forty-four Vanderbilt casualties of World War I are carved in stone above the two fireplace mantles, located at either end of the room.

In 1974, Sarratt Student Center opened and student activities moved out of Alumni Hall and across Alumni Lawn to the new building, which was linked with Rand Hall. In subsequent decades, Alumni Hall was home to various university offices, its former life as a student center all but forgotten.

The rejuvenation of this iconic Vanderbilt building began in 2011, when Alumni Hall was added to the National Register of Historic Places for its architectural significance. It was Vanderbilt's fifth listing on the register, joining Peabody College, the Old Gym, Old Mechanical (now part of Owen Graduate School of Management), and Vanderbilt Dyer Observatory. In November of that year, the Vanderbilt Board of Trust voted to restore Alumni Hall to a prominent place in student life. Its renewal would support a wide range of activities—such as tutoring, catered dining, meetings, studying, and socializing—yet the integrity of the building's historic architecture would be preserved. The renovation project was the first for this Vanderbilt landmark.

The university's decision to renovate Alumni Hall recognized and responded to the ever-increasing levels of student engagement on campus that required more meeting and gathering space than Rand and Sarratt could provide. The update of Alumni Hall also supports the continued development of the College Halls initiative, the university's residential college plan to transform the undergraduate experience at Vanderbilt. Building on the success of the first phase of College Halls, The Martha Rivers Ingram Commons for first-year students, phase two is scheduled for completion in 2014. Next fall, upperclass students will move into Warren College and Moore College, currently under construction on the former site of Kissam Quadrangle. The renewed Alumni Hall, located in close proximity to Warren and Moore, as well as Sarratt and Rand, will provide students with additional opportunities to engage with each other and with faculty, and will contribute to a greater sense of community for all Vanderbilt students.

As an exciting precursor to the opening of Warren and Moore, the renovation of Alumni Hall, led by Bruner/Cott Architects and Planners of Boston, was completed in August 2013. Features include revitalized space for the Writing Studio, an exercise facility, music lounge, restaurant, classroom, offices, and catering kitchen, as well as expanded terraces on the east and west sides. The interior spaces have been energized with light, air, and movement, accomplished by the removal of interior walls and the creation of a contemporary-style suspended staircase that connects all levels. New details such as glass tiles, stone, and lighting fixtures that reflect a sleek modern aesthetic brighten and refresh the building's interior and are strikingly juxtaposed with beautiful original building details that remain, including most of the woodwork, limestone, and the three original fireplaces.

Also remaining are the forty-four names carved above the fireplace mantles in the Memorial Room, which in August 2013 was renamed in honor of alumnus Joe C. Davis, thanks to a generous gift from the Joe C. Davis Foundation. Davis, B.A. 1941, was a Vanderbilt tennis legend, winning SEC titles in 1939, 1940, and 1941. During World War II, he joined the United States Navy and served as a Lieutenant. He later became a successful businessman and a member of the Vanderbilt Board of Trust. A plaque in the Davis Memorial Room honors his memory, joining the others memorialized there in a room where current students enjoy lovely views of campus from its signature bay windows.

The brilliantly renovated Alumni Hall once again celebrates student life, as it did in its beginning. The building's bright new interior combined with its historic architecture make it an enticing place for students to ponder the lessons of the past while they prepare for the challenges and opportunities of the future. 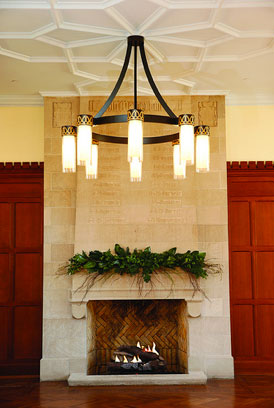