Skip to main content
Past Symposia: The 3rd ICI Biennial 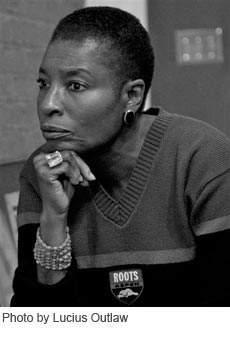 Hortense J. Spillers is the Gertrude Conaway Vanderbilt Professor of English at Vanderbilt University. Since receiving her Ph.D. from Brandeis, she has taught at Wellesley College, Haverford College, Emory, and Cornell Universities. She has also served as a guest professor in the Program in Literature at Duke University during academic year 2002-03 and for two consecutive years during tri-semester terms at the John F. Kennedy Center for North American Studies at the Free University in Berlin, Germany, 2000 and 2001. A recipient of numerous honors and awards, among them, grants from the Rockefeller Foundation and the Ford Foundation, she has been a fellow at both the National Humanities Center, Research Triangle, and the Center for the Study of the Behavioral Sciences, Palo Alto. While at Haverford, she was chair of the English Department for two years before moving to Cornell where she joined the Norton projects by serving as one of the period editors of the Norton Anthology of African-American Literature. At Vanderbilt, where she joined the English faculty there in AY 2006-07, she founded The A-Line Journal, an independent online magazine devoted to examination of national and world events through a theoretical lens.

Her collection of scholarly essays, Black, White, and In Color: Essays on American Literature and Culture, was published by the University of Chicago Press in 2003. With Marjorie Pryse, she co-edited Conjuring: Black Women, Fiction, and Literary Tradition, published by Indiana University Press; Spillers also edited for the English Institute series a collection of essays entitled Comparative American Identities: Race, Sex, and Nationality in the Modern Text, published by Routledge. Spillers serves on a number of editorial boards, among them, the Editorial Collective of boundary 2, and is a former member of the Executive Council of the Modern Language Association. Some of her more recent essays have appeared in The New Centennial Review, das argument, and boundary 2. She co-founded with Tamura Lomax The Feminist Wire, an online magazine dedicated to feminist issues and critique. Currently, she is at work on two new projects, the idea of black culture and black women and early state formations. She teaches courses in American and African-American literature, Faulkner, and feminist theory. She travels extensively, lectures widely both at home and abroad, most recently delivering the 2010 Sidney Warhaft Distinguished Memorial lecture at the University of Manitoba, and will give the DuBois Lectures at Harvard in the fall of 2014. She lives in Nashville.

Fall 2018:  Prize winners will be announced.